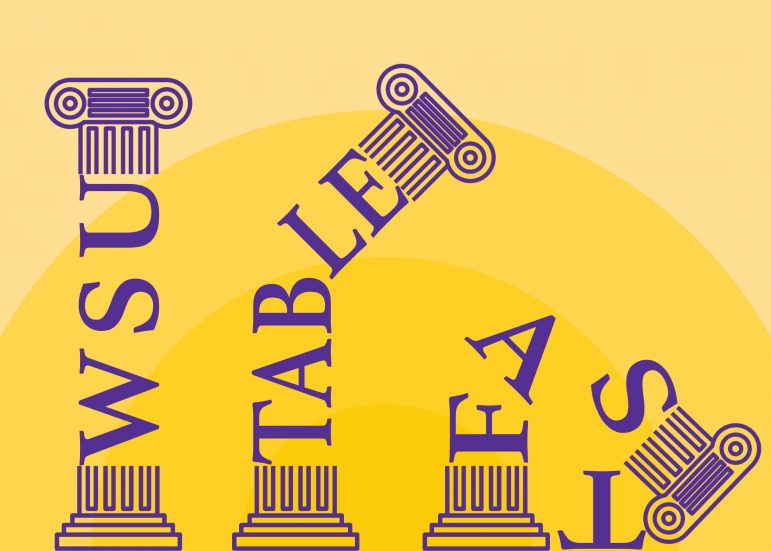 With the uncertainty surrounding one of the College’s most unconventional semesters in memory, the Three Pillars, the College’s three branches of student government, have not only been adjusting to the confusion of COVID-19 and campus restrictions, but also to their new format. Student government has a tumultuous recent history, including the abolition of the College Council (CC) last spring and the subsequent implementation of the Three Pillars, which includes Facilitators for Allocating Student Taxes (FAST), Williams Student Union (WSU) and The Advisory Board for Lobbying and Elections (TABLE).

This year, each of the Three Pillars is continuing much of their work from the spring semester, while each also attempting to differentiate itself from CC and facing new challenges presented by COVID-19.

FAST, the branch of student government in charge of club funding and budgets, intends to focus on transparency this year.

Essence Perry ’22, an at-large member of FAST explained, “We make public spreadsheets, we tell you exactly how much money is left in each pot, we tell you who’s getting approved and who’s not.” They put all their records on their website and hold open office hours for club treasurers to get help.

Yet, some still feel there has not been much improvement in transparency. Shreyam Misra ’21, a club leader of the Williams College Debating Union, felt that though FAST was doing better in terms of responsiveness and holding office hours, some barriers remain. “Funding decisions are now being made almost entirely behind closed doors,” Misra said.

While previously CC would have the club treasurer in the room discussing their budget, the decision is now simply delivered after it is made. Though decisions are appealable, there is a marked difference in how much say clubs have in the discussion of their budget.

Furthermore, CC meetings were live-streamed, enabling anyone to view representatives’ deliberations and votes, FAST budget decision meetings are closed to the public and their votes are not disclosed.

Another main priority has been equity of funds, something that many students felt was not done particularly well by CC. According to Perry, “Money was running out, but certain clubs would get most of the money.” This year, FAST hopes to ensure clubs are getting equal shares and spending money wisely.

With no student activities tax this year, FAST has had to work with depleted funds and cut down on spending for student organizations. “There are ways we can reduce and be creative about the way we spend money,” Perry said, though she admitted it would be hard to do so in some cases. For example, club sports’ need for competition gear and travel funds have been diminished this fall since going to competitions is not possible during the pandemic.

However, some organizations feel the money allocated was not enough to carry out their functions, and they will be especially strained if the spring semester brings back in-person events with no corresponding increase in funding.

“It’s going to be extremely hard for the club to go to tournaments,” Misra said, referring to the chance that the Debating Union would be going to in-person tournaments in the spring. “In order to pay tournament fees, students might have to use their personal funds, which becomes a barrier in terms of equity and who can participate in debate.”

WSU is making do with less members than intended

While the recently elected WSU, the advocacy body of the Three Pillars, has only had one meeting this school year, representatives say they’ve already begun working out priorities and plans.

However, out of the 12 seats in the WSU, only seven of them are filled. Each of the four classes are meant to have an equal number of three seats, yet it currently comprises only three first-years, three sophomores, one junior and no seniors. Not enough upperclass students ran for WSU, resulting in only one representative between the two years.

“I think it reflects a larger campus apathy towards student leadership, which is an issue I want to tackle,” representative Argenis Herrera ’22 said.

Another representative, Samir Ahmed ’24, attributed the empty seats to the previous student government’s reputation. With the recent change from CC to the Three Pillars, he said upperclass students may remain skeptical about student government’s efficiency and competence, making earning the student body’s trust a key item on the WSU’s agenda.

Still, according to the seven members of the WSU, they’re not letting the empty seats hinder their performance. “It’s disappointing we don’t have a full advocacy body, but we’re making it work and hoping to build excitement around WSU and the members we do have,” Herrera said.

For now, WSU is getting started with their long list of agenda items. They’re hoping to focus on campus healthcare, including access to reproductive healthcare products, mental health services, and racial equity. They plan to address the Coalition Against Racist Education’s (CARE Now) demands and develop an anti-racism guide for students. The CARE Now demands from spring 2019 included increased diversity in the College’s faculty and staff, more funding for Minority Coalition groups, creating support networks for faculty of color and much more.

TABLE is fixed on COVID-19 response

TABLE serves as the advisory board for all committees of the College, appoints students to committee roles and runs elections for any student-elected office.

According to TABLE representative Adam Jones ’21, CC not only “failed to fill about half of the committee seats” but also had a “huge delay in actually accomplishing the task of appointing people to committees.” This year, 77 of the 81 committee seats have already been filled and elections for WSU and the Honor and Discipline Committee have been held.

Currently, TABLE is primarily focused on COVID-19 response. Due to pandemic-related event cancellations, many committee roles have been severely diminished, so there has been significantly less work for them to do.

On the other hand, some committees have had a much heavier workload. The Committee on Educational Affairs discussed policies like mandatory pass/fail last spring as well as other COVID-era educational adjustments. Furthermore, some typically less high-profile committees have seen their roles increase significantly. The Calendar and Schedule Committee that decides the yearly calendar is one that “no one ever thinks about, yet they decide when we start school,” Jones said. “That committee has become really important because when we start school is kind of up in the air right now.”

As the pandemic has made everything at the College uncertain, these committees are working overtime to handle COVID response in the best ways possible. Jones noted that committees do not typically move rapidly, nor are they designed to, but “they’ve been doing a good job of transitioning into a brand new environment with fast-paced decision making.”