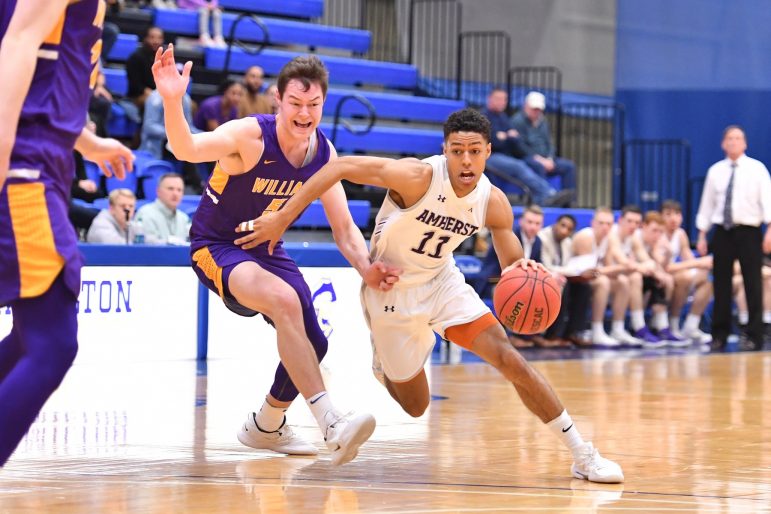 James Heskett ’19, the 2017-18 NESCAC Player of the Year, hit two early 3-pointers and finished with 15 points in a team-high 36 minutes.  Photo courtesy of Sports Information.

“I thought it was very similar to the first time we played them,” head coach Kevin App said. “I thought our guys did a great job of staying mentally tough and fighting when we were down. But obviously Amherst didn’t flinch either when they were down. When two good teams play for a third time, it’s likely to come down to one play or call. In the end, we came up short.”

Having lost both regular season matchups against Amherst, the men sought to build an early lead. Despite two early 3-pointers from James Heskett ’19, however, the Ephs could not create any separation. Five minutes into the game, Amherst guard Devonn Allen drilled a 3 to give the Mammoths a 13-12 advantage, a lead they would not relinquish for most of the half.

Fighting from behind for the next portion of the game, the men struggled at the free throw line and missed several opportunities in the paint. While they trailed by as many as eight, the Ephs managed to cut their deficit to four at 28-24 following a jump shot by Heskett.  A shooting foul committed by Bobby Casey ’19 on the next possession sent him to the bench with two fouls. In Casey’s absence, Amherst scored four straight points to go up 32-24 with under seven minutes remaining in the half.

As Casey rested on the bench, the Ephs rattled off a 9-0 run over the next five minutes to regain the lead at 33-32. Mammoths then quelled the Ephs’ momentum by finishing the half on an 8-2 run. Amherst guard Grant Robinson punctuated the run with a pull-up three pointer as the buzzer sounded to put Amherst up 40-35 at the half.

In theory, the difference could have been accounted for at the free throw line. The men shot 7-of-12 while Amherst converted a perfect 7-of-7 foul shots. Robinson led all scorers with 16 points. Heskett paced the men with 11, while Matt Karpowicz ’20 added 7 points and 5 rebounds.

Amherst maintained its momentum from the end of the first half in the opening minute of the second. After Casey had a 3-point attempt blocked, the ball made its way to Amherst center Joseph Schneider for a breakaway two-handed jam.

Less than five minutes into the second half, Amherst built a 10-point lead at 48-38. With 11 minutes remaining, the Ephs found themselves down 55-45 and in desperate need of offense. Over the next three minutes, four different Ephs scored as the men narrowed the deficit to one, forcing Amherst to call timeout. Out of the timeout, Karpowicz scored off a nice post move to give the Ephs their first lead of the second half.

It would remain a one-possession game until Casey hit a clutch 3 from the left side to put the Ephs up 69-64 with 3:27 left. Casey’s lone 3 of the game, capped a 5-0 run that swung momentum in favor of the men. But an 8-point scoring outburst by Robinson capped a timely 10-0 run to close out the playoff victory for Amherst.

Casey had a 3-point opportunity to tie the game with 14 seconds left, but his attempt rimmed out. Robinson hit two free throws on the other end to seal the win.

Robinson led all scorers with 32 points. Joseph Schneider added 10 points and 8 rebounds on perfect 3-for-3 shooting for the Mammoths.

“He’s had a phenomenal year and played really well the last few games,” App said of Robinson. “Unfortunately, he had a heck of a game today.”

With its victory over Hamilton in Sunday’s NESCAC final, Amherst clinched an automatic berth in the NCAA tournament. The Ephs received an at-large bid to the tournament and will host Husson in the first round. Tip off is at 7:30 p.m. on Friday in Chandler Gymnasium. Plattsburgh State plays Gwynedd-Mercy at 5:30 p.m. in the other final, and the winners of the two first-round games will meet on Saturday in the second round.