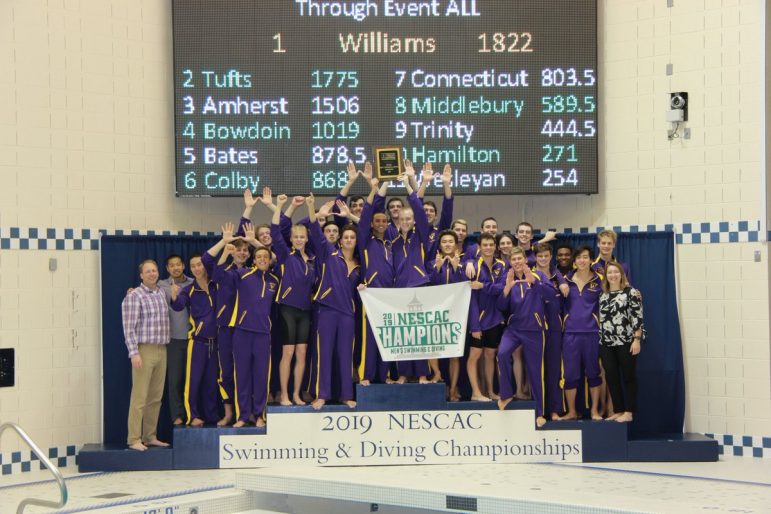 No. 19 men’s swimming and diving reclaimed the NESCAC championship last weekend – its 17th title overall in the meet’s 19-year history– a year after falling to Tufts and missing out on a 16th consecutive conference title. Over the four-day meet in Middlebury, Vt., the Ephs finished with 1822 points, closely followed by the Jumbos with 1775.5 points.

“This meet was an absolute back-and-forth battle with a very good Tufts team,” head coach Steve Kuster said after the win. “The effort, resilience and resolve that this team showed was inspiring. [I’m] super proud of this group and the entire Williams swimming and diving team.”

With a new four-day format, the NESCAC Championship kicked off on Thursday night with the 800 freestyle relay. The change benefitted the Ephs as the “B” and “A” relay teams both bested the previous pool and meet records. The “A” relay, which touched in 6:34.03, secured the NESCAC record and the fastest time in Div. III this year.

On Friday, the first full day of the meet, the men maintained momentum and extended their lead.

After Tufts won the 200 freestyle relay and Amherst’s Sean Mebust edged out Melnick in the 50 breaststroke, the distance trio of Jamie Lovette ’21, Jackson Karofsky ’21 and Andrew Trunsky ’20 swept the podium in the 500 freestyle. Lovette clocked in first with a time of 4:27.49, almost 2 seconds faster than his winning time last year.

After the 500 freestyle, the meet went back to 50s as Nick Whitcomb ’22 cracked the top three in the 50 backstroke and recorded a personal best. In the next race, the 200 individual medley (IM), Paul Leclerc ’22 finished third and secured a personal best of 1:51.35 thanks to his fast backstroke leg.

The last individual event of the night was the 50 freestyle. Curtis Maher ’19 placed fourth with a time of 20.93, but Tufts’ Roger Gu broke the 20-second mark, finishing in 19.89 for first place. In the 400 medley relay, the final team event of Day Two, the Ephs secured third place and added to their point total heading into their third day of racing.

On Saturday, the Ephs continued their strong meet, but the Jumbos narrowed their deficit to 24 points.

After a third-place finish in the 200 medley relay, the Ephs won five out of six individual events.

Trunsky first brought the house down in the 1000 freestyle, coming in first with a time of 9:15.31. He was the second seed going into the meet and came out on top by 5 seconds. He set a personal best time by 7 seconds and was only 2 seconds off of the NESCAC record. Next, Karofsky reached the top of the podium in the 400 IM, dropping 4 seconds off of his preliminary performance for a time of 3:53.64 in the finals.

In the 100 butterfly, David Pearcy ’21 beat his previous best time, swimming especially fast in the last 50 yards. Lovette then smashed his personal best, the pool record and the meet record with a time of 1:37.82 in the 200 freestyle. His last three 50s were almost the same time as his first, showing his strength in shorter events as well as distance ones.

In the 100 breaststroke, Melnick, the third seed going into finals, avenged his earlier loss to Mammoth Mebust with a first-place and personal best of 26.13. After third- and fifth-place finishes in the 100 backstroke to conclude the night, Kuster called the meet “a crazy ride.”

“The men have competed incredibly well,” Kuster said. “[Satuday] was a tremendous night with some great swims for us. I love the grit and fire the team is bringing to the pool every session.”

Sunday, the fourth and final day of competition, started with the distance swimmers once again proving their dominance. Karofsky won the 1650 freestyle, smashing his best time as well as sneaking under the pool record at 15:31.01, and Trunsky clocked in at 15:37.71 for second place. Lovette took third with his speedy front half. His time of 15:44.15 ensured that the Ephs swept the podium. All three currently sit in the top 15 in Div. III.

Tufts retaliated in the 200 backstroke, however. Jumbo Kingsley Bowen, who became the team’s first swimmer to earn the NESCAC Swimmer of the Year Award, concluded a sweep of all three backstroke events with a time of 1:46.48.

After three Ephs competed in both the 100 freestyle and 200 breaststroke and earned a combined 143 points, the men dominated the final individual event of the meet, the 200 butterfly. Going into the race, the men trailed Tufts by 6.5 points, but they swept the podium and recorded five of the six fastest times. Lucca Delcompare ’20 led the group in 1:48.4. With the team effort, the Ephs surged into a 56.5-point lead over the Jumbos.

A fourth-place finish in the 400 freestyle relay was enough to clinch the NESCAC title for the Ephs.

Amherst placed third in the overall team standings. Bowdoin’s Mitchell Ryan, who won the 1-meter and 3-meter diving and received NESCAC Diver of the Year honors, helped his team to fourth place with 1010 points. Host Middlebury ended the meet in eighth place with 589.5 points.

The men will continue on to the NCAA Championship in Greensboro, N.C., from March 20–23.