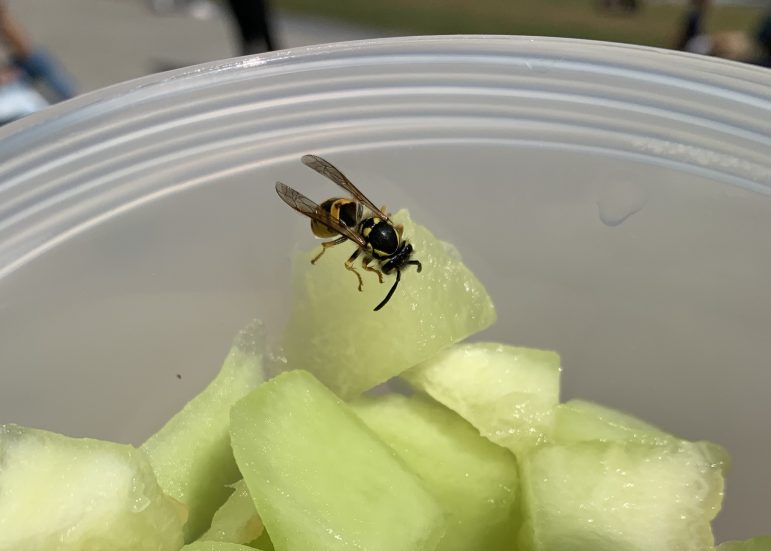 Hordes of yellow jackets have been harassing students eating outside because of COVID-19 restrictions. (Rachel Buccalo/The Williams Record)

It’s impossible to miss them. They’re drowning in spilled syrup on the picnic tables or buzzing around the green compost bins. Or maybe you’ll see someone on Paresky Lawn suddenly stand up and run a couple feet in one direction, then return sheepishly to their friends a few moments later.

Most students call them bees, but they’re actually wasps — more specifically, yellow jackets. You should be careful around them, but there’s no need to panic, according to Professor of Biology Joan Edwards.

“Yellow jackets are a little high strung,” she said. “I would keep distance. I wouldn’t push them too far, but in general I think you can avoid getting stung.”

That means you should avoid swatting them — especially when near a nest — or otherwise being aggressive toward them. Their sting has a pain rating of two on a scale of one to four, which is the same rating as a honey bee’s sting.

Matt Meczywor, who works at Fresh ’n Go, said that he often gets stung when handling trash bins.

“There’s no real way around it,” he said.

While Meczywor regularly wades into swarms of 15 or 20 yellow jackets, he doesn’t get stung every single time. “The odds go up the more you do it,” he said.

“I’ve also done the one where you have to lift up the bag and suddenly 20 of them decide that they are going to fly now because they just freaked out,” he added.

Despite the noticeable swarms of wasps around the trash cans by Paresky, Meczywor said that this year is no worse than normal — it’s just part of the job.

Edwards said yellow jackets help their females’ build up fat reserves this time of year, which explains why there are so many around.

“Right now they’re probably in a feeding frenzy really trying to tank up to get through the winter,” she said. “They’re also probably into the mating phase.”

While she said she has never observed the mating phase, she has heard that yellow jackets have a “frenzied mating situation.” Every male and female mates five to nine times, then the males die and the females find a nice warm spot. A female wasp will use up to around 85 percent of her body fat over the course of the winter. In the spring, female wasps become the queens of new colonies, which they might form in old mouse dens or loose floorboards.

When looking for food, yellow jackets have been known to travel from 400 meters to a kilometer.

“They’re looking for water, sugar water — like nectar — and a protein source, which is gonna be some kind of prey,” Edwards said. “In nature, they’re going to eat flies — insects that are smaller than they are — [and] usually they’ll pounce on them and kill them and eat them, but they also will forage on carrion, and they’ll forage on any food left over from people.”

These wasps are hungry for many of the same things that students eat. “They can take little bits of meat out of your hamburger, and they love things like Coca-Cola or cider,” Edwards said. “That’s like drinking nectar. Any food is going to attract them and unfortunately they can also communicate back to their hive-mates, ‘Hey there’s some great food here,’ so they can recruit other foragers to come.”

It’s likely that the wasps are here to stay until it gets cold. “They also learn where things are,” Edwards said.“Once you’ve got them, you kind of have them. It’s kind of hard, especially if you have regular trash piles.”

That might explain why it feels like there are so many more wasps around here this year. Everyone is eating in the same place outside right next to uncovered, overflowing trash cans. They’re not going anywhere until the first hard frost — which might not come until early October.

“When I was growing up I was terrified of anything that flew that had a stinger,” Edwards said. “I used to become hysterical, and of course then I became a biologist, then I became a botanist, then I started to study pollination biology where a lot of the main pollinators have stingers, and I got over it. I realized how amazing and wonderful they are, and how smart they are, and how beautiful they are and how they can do just incredible things.”

The wasps have an astonishing array of survival skills. “These little things — they can mobilize their friends, they can remember where things are… They can figure out how to live through a winter,” she added.

This influx of wasps reminded Edwards of a quote from E. O. Wilson, a biologist who studied ants.“Probably one of the most frequent questions he gets asked is ‘what do I do when I get ants in my kitchen?’ He says, ‘what I tell people to do is to bend over and look at them carefully.’”

Edwards says she took that advice to heart. When she sees ants in her house (except carpenter ants because they eat wood), she just lets them pass by.

“They come through during the spring and then they disappear. They’re okay,” she said.

For those tired of the waps, she recommends a little field observation.

“I suppose if you’re sitting there having a sandwich and they’re trying to take bits of it, you could let them take a bit, and you could watch them and see what they’re doing,” she said. “As long as you don’t let them sting you.”