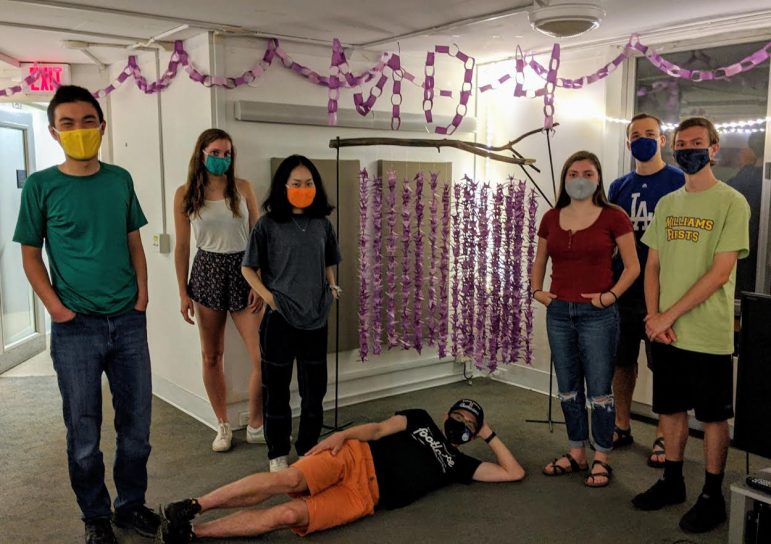 While the weeks between quarantine and classes brought many out of their dorms to enjoy the outdoors, the first-year residents of Mills-Dennett 4 (MD4) found themselves inside, doing quite the opposite. Working in dorm rooms, common areas and hallways for two weeks, they collectively folded 1,000 origami cranes, creating an art installation and meaningful bonds.

The original plan, devised by Syl Foisy ’24, was to fold the cranes to stay busy during quarantine, with their JAs sliding sheets of paper under everyone’s door. Foisy ordered three different shades of purple paper from Staples, sent them to his local UPS store to be cut into squares, and let the papers quarantine in his room. But, in fear of violating any college guidelines, they postponed starting the project until everyone completed their in-room quarantine. Once everyone was free to leave their rooms, they started folding the cranes.

“It really worked out this way,” said Foisy. “It turned into a great way to get to know each other, because we had something to do while talking. All of them were folded over a conversation, which is really special.”

His entrymates agreed. “It’s helpful when you’re meeting new people to have a third thing to focus on together. It gave us an excuse to spend free time together in our common room, and a shared new activity to bond over,” said Charles Yang ’24. 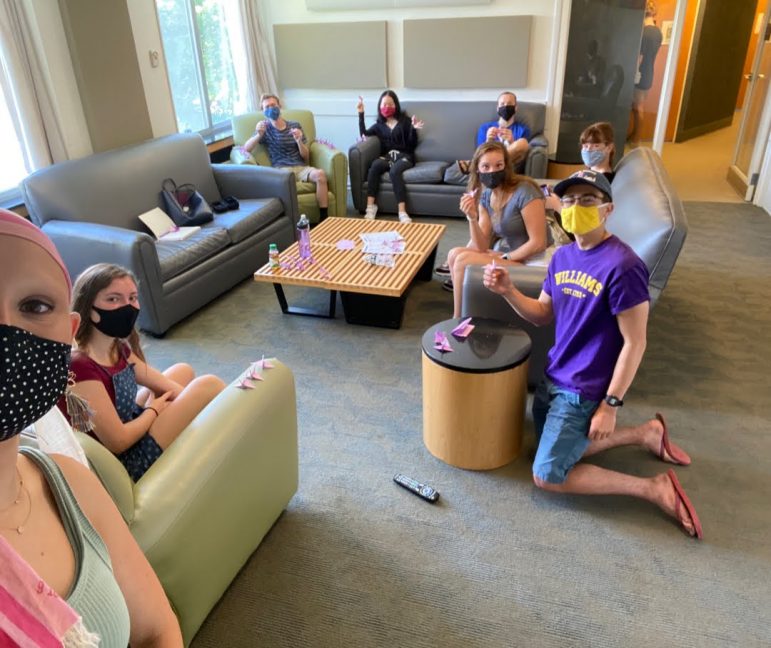 In total, 20 of the 25 members of the entry, and their JAs, contributed cranes. “It became less about the cranes and more about us connecting with each other and creating something together,” said Hailey Brown ’24.

Poll shared similar sentiments. “It was special because we all were motivating each other, working towards a common goal,” said Noah Poll ’24.

Foisy folded 1,000 cranes with his family over the summer, because an ancient Japanese legend promises that anyone who folds 1,000 origami cranes will be granted a wish. His family’s wish was “to heal the Earth from COVID-19, racism, and everything else nasty that’s happening right now.” The entry’s wish: to keep campus open and for COVID to end. “Might as well wish big, right?” said Foisy.

Foisy and entry-mate Sarah Lindeman ’24 already knew how to fold cranes and took charge of teaching the rest of the entry. “I showed one person, someone else showed another person, and then we all got the hang of it,” said Foisy. Some members of MD4 had a bit of trouble; Poll and Brown admitted to having to watch YouTube videos to clarify the steps after being taught.

“It was hard at first,” said Yang. “The first couple – or more than a couple – turned out kind of wonky, but I think we all figured it out by the five or six hundreds.”

Not everyone was as eager as Foisy, and some needed a bit of motivation before getting invested in the project. “Honestly, I wasn’t super interested in making cranes at first,” said Sean Morrisey ’24, but eventually, Foisy’s “otherworldly enthusiasm” convinced him, and he joined in, coming to find the task “addicting.”

“Our entry would just gather in our common room and we would talk and make one crane after another until we were surrounded with piles of cranes. It became hard to stop,” said Morrisey. 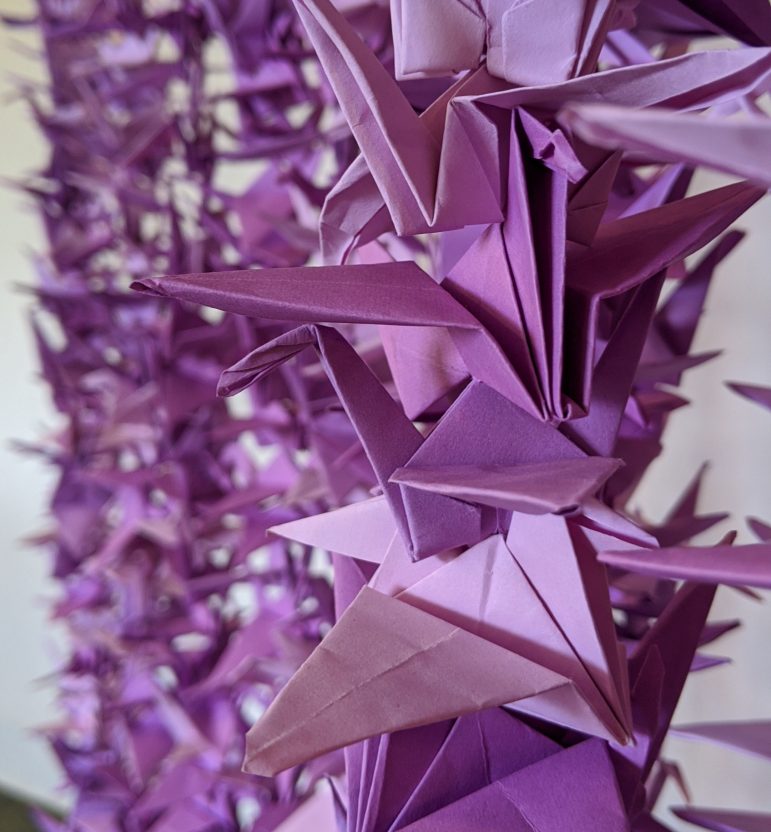 The cranes span 20 rows of 50 each. According to Foisy, no two cranes are alike, as each person had a different folding style. (Photo courtesy of Syl Foisy ’24.)

Every contributor folded a different amount – Brown only made five while Foisy, Yang and Lindeman each claimed about a hundred. After two weeks, the cranes were collected to a total of 1003, and the extra paper was folded into paper chains. But, when double checking his count, Foisy realized they were about 50 short and had counted incorrectly, so Foisy, Yang, Lindeman and Poll took to the common room and quickly scrambled to finish.

With the correct number of cranes, Lindeman used a needle and fishing line to string together 20 strands of 50 cranes, and Yang found a large stick outside to attach them all to. But they could not figure out how to make the stick stand up, so after his sculpture class, Foisy asked sculpture studio technician Sam Pasapane for advice. Pasapane taught him to weld spare metal rods from the shop into a standing display for the piece.

“I had to run from class back to Mission to grab all the cranes then run back to the shop,” said Foisy – who, by the way, ran a half marathon in his dorm room during quarantine. “I had never run that fast across campus, and I had never received such crazy looks, running across Paresky lawn with a giant stick and a ton of cranes.”

With Pasapane’s assistance, Foisy welded two metal stands for the stick to rest in, finally finishing the piece. “[Pasapane] literally dropped everything to help me make the frame, and even stayed after her shift to make sure we would finish that day!” said Foisy. 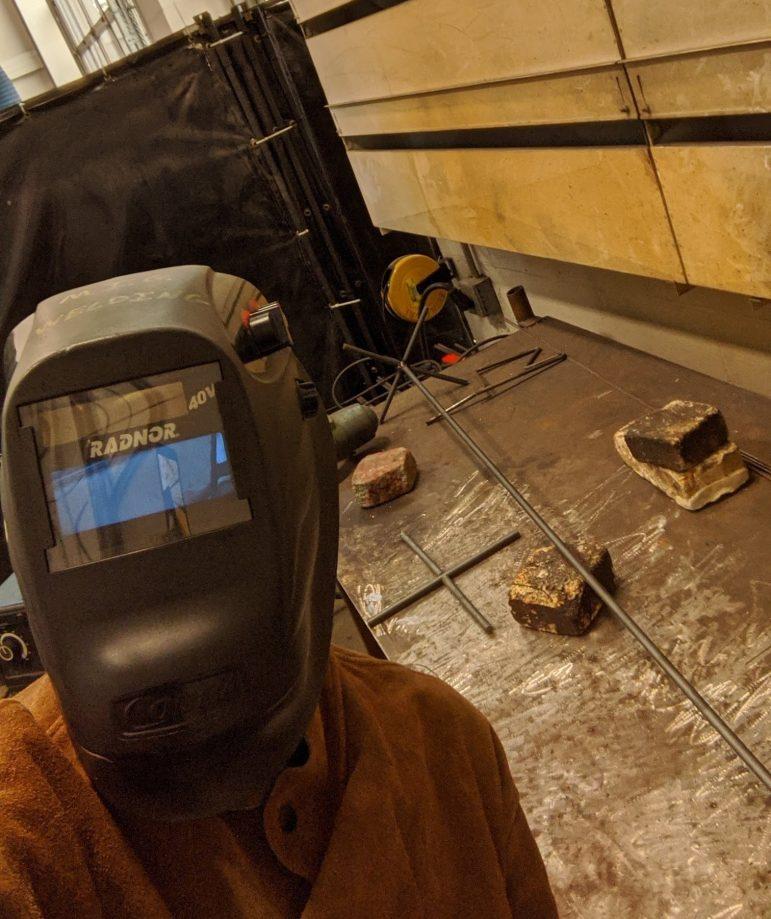 Foisy welded the platform in the sculpture shop. “It was easy to prevent Covid spreading with the welding helmet,” he said. (Photo courtesy of Syl Foisy ’24.)

And thus, the piece was complete. While Foisy never doubted that the project would get done, that was not true for all. “I thought it was a cute idea, but I was not sure that it would actually happen,” said MD4 Junior Advisor Georgia McClain ’22. “When I saw the final product, I was shocked, amazed, and most of all, proud.”

The final project belongs equally to all members of the entry, living in the common room for all to see. Legend has spread among the class of 2024, and according to members of MD4, other first years have made the trip up to the top of Mission just to see it. 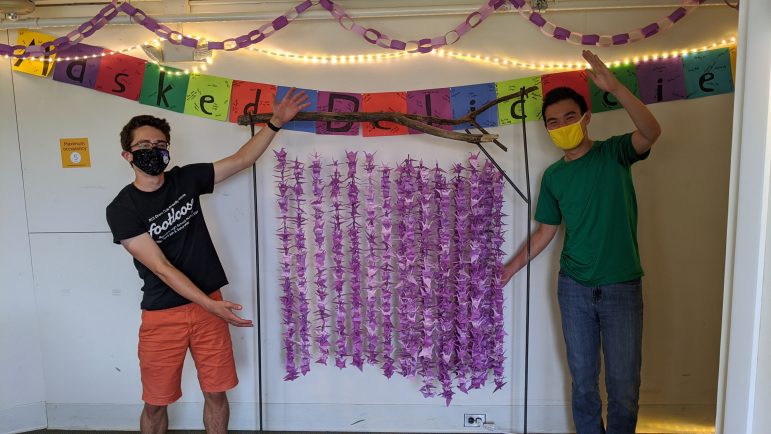 They have not yet decided on future plans for the piece once they all leave the entry next year; some ideas are to put it up in WCMA, set up a display in Paresky or leave it in the common room for future residents of MD4.

What is known for certain, though, is that it would never belong to or be taken home by just one member of the entry. “Absolutely not!” Lindeman said.

While there are no upcoming plans for another origami project, the true success of the cranes will remain: a unique and solid bond between the members of the entry.

“Part of what was so cool about the project is that since everyone has varying skills and different techniques and styles, when you look up close each crane is its own individual creation, but when you take a step back, it all comes together to be one cohesive art piece,” said Lindeman. “It’s kind of cheesy, but that kind of represents us as an entry.” 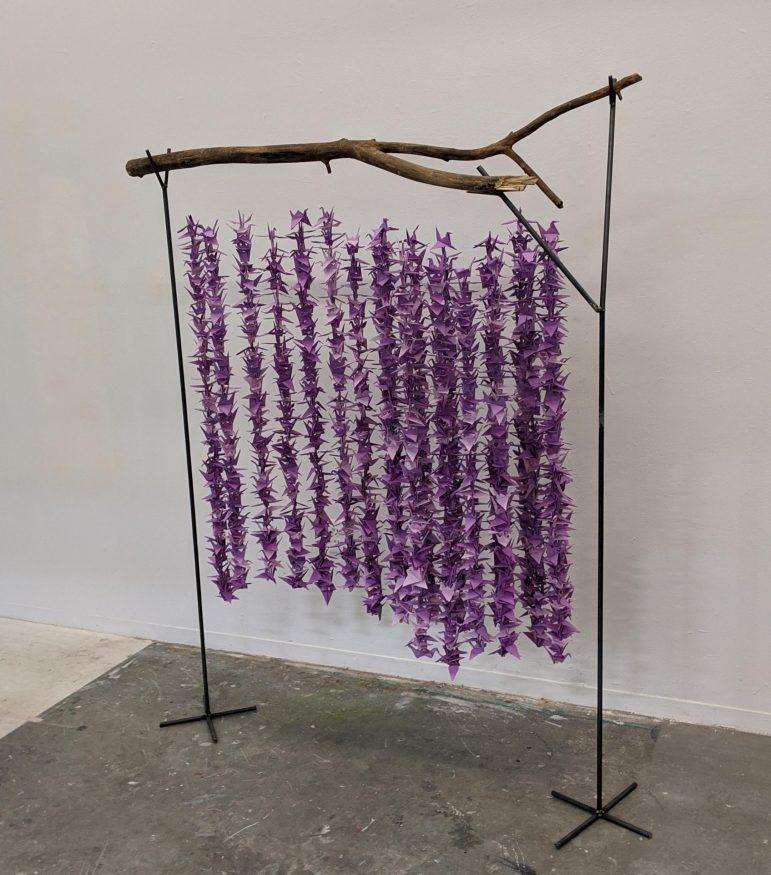 The first time the cranes were put on their newly welded frame. (Photo courtesy of Syl Foisy ’24.)