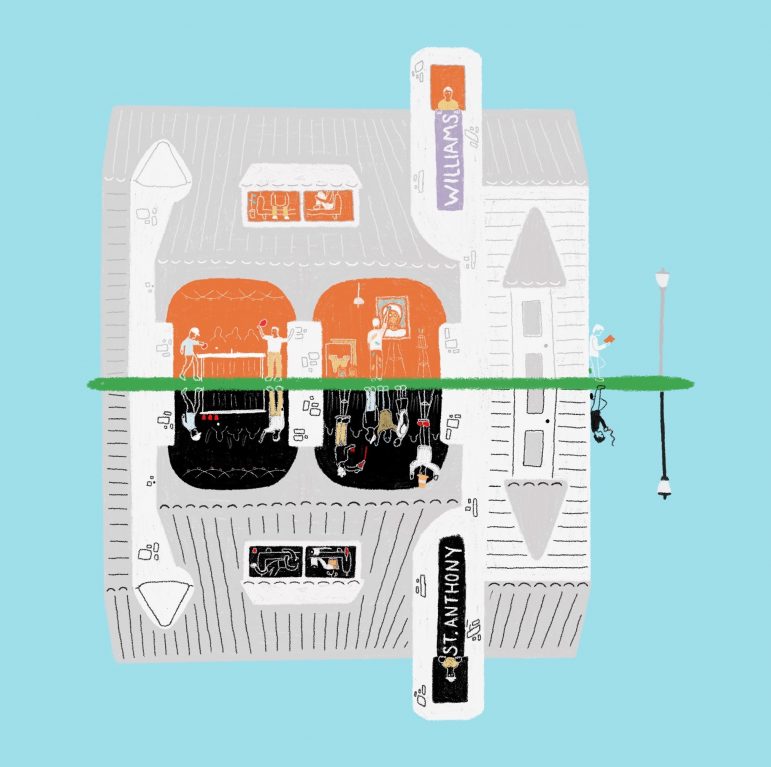 The College’s rule on fraternities is clear: Students cannot join them, and those who do may face suspension or expulsion.

But it seems that rule has not stopped St. Anthony Hall.

Tax records point to the recent and perhaps continuing existence of the Williams chapter of St. Anthony Hall, a national fraternity and literary society that had an official chapter at the College before the abolition of fraternities in the late 1960s. It also had an underground, co-ed chapter that was exposed in 2003 when students circulated rumors about the fraternity and an alum confirmed openly that the chapter had existed for decades. That year, the deans offered amnesty to anyone who admitted to being a member of the fraternity, but no one did. The fraternity continued to recruit members the following year, the Record reported at the time.

A compelling piece of evidence for the recent existence of the fraternity is that its organization for alums, called the 1853 Foundation, counts several recent graduates among its members — including two who graduated from the College in 2016.

Recent, publicly available tax forms show that the 1853 Foundation has provided significant grants to an entity under the name Vermont Literary Society (VLS) — another name for the underground chapter of St. Anthony Hall exposed in 2003. The VLS’s legal status as an active organization was terminated on Monday, Sept. 28.

Dean of the College Marlene Sandstrom told the Record that she was not familiar with the VLS and had not heard anything about underground fraternities operating on campus.

Few of those involved in the 1853 Foundation or the VLS were willing to talk to the Record. Therefore, it is difficult to determine the exact relationship between the VLS and St. Anthony Hall, as well as what the Williams chapter, if it still exists, looks like in practice. Nevertheless, the evidence suggests that the College’s undergraduate chapter of St. Anthony Hall persisted well after 2003.

Eleven of the 12 names listed as officers of the 1853 Foundation correspond to names in the College’s alumni directory. Seven of the officers graduated from the College after 2003, with two graduating as late as 2016.

The 1853 Foundation held over $450,000 in assets by September 2018, per its tax return. In recent years, it has transferred around $20,000 annually in tax-exempt grants to the VLS for what it has described to the IRS as “research and educational purposes.” Notably, the underground chapter of St. Anthony Hall that was brought to light in 2003 was also known as the VLS.

Before 2016, the foundation annually gave a similar amount of money to funds associated with the national fraternity. The reason these grants usually total $20,000 is likely that foundations are required by law to spend at least 5 percent of their endowment each year.

Burr, who was in St. Anthony Hall as an undergraduate in the years before the College banned fraternities, said the grants from the 1853 Foundation went through bank accounts listed under the VLS’s name to the national fraternity of St. Anthony Hall, which uses the money for scholarships and grants. He noted that he was not himself closely involved in the money transfers.

“We don’t do much, frankly,” he said of the 1853 Foundation. Burr said he did not know why younger alums, who attended the College well after fraternities were banned in the late 1960s, were involved in the foundation. He also said that he did not know if St. Anthony Hall was still active at the College.

Smith, the rare non-Williams-alum involved with the 1853 Foundation, offered a hazier description than Burr of what the $20,000 grants to the VLS go toward.

“I don’t know what they use the money for,” he said.

Smith has served as an officer of the 1853 Foundation since at least 2000 and founded Smith, Watson & Co., the accounting firm that prepares the foundation’s tax returns.

The 1853 Foundation’s assets, stored mainly in stocks and bonds, have hovered around $400,000 for the last two decades. The most recent record available, from the tax year ending in September 2018, puts the foundation’s assets at $451,544.

Burr said he thought the money came from the 1990 sale of the national fraternity’s clubhouse in the Upper East Side of New York City, of which he said the different chapters shared the proceeds. But Smith — who once wrote an article for a St. Anthony Hall publication about the sale — suggested that the money may have come from the old Williams chapter’s endowment, though he said he was not sure.

Because the VLS was a small organization that received under $50,000 a year, its tax returns are not publicly available. But the State of Vermont’s limited records for the Vermont Literary Society Inc. still provide clues about the organization.

The VLS’s directors are listed as Sayd Randle (likely ’08), Daquan Daly (likely ’16) and Kevin Waite (likely ’09), all of whom are also listed among the several directors of the 1853 Foundation. Randle, Daly and Waite did not respond to requests for comment.

The VLS recently terminated its legal status as an active organization. On Aug. 27, the VLS’s registered agent (an entity that receives legal documents on an organization’s behalf), Capitol Services, resigned. Under Vermont law, if a replacement is not appointed in 31 days, the organization is terminated. So on Sept. 28, a new filing was added to the VLS’ records with the State of Vermont reading, “Status changed to terminated.”

It remains unclear why the registered agent resigned. A receptionist at Capitol Services said the company could not provide information about a specific organization but that the most common reason for the resignation of a registered agent is an organization’s failure to pay fees.

The name “Vermont Literary Society” likely alludes to St. Anthony Hall’s tradition of literary activities. In the 1960s, according to Burr, the fraternity required presentations of intellectual work, and the Record reported in 2003 that VLS meetings involved literary discussions.

After his death in 2019, Mark Lanier ’80, who had been involved with the 1853 Foundation since at least 2002, was memorialized on the national fraternity’s website.

“Mark was, quite simply, the heart and soul of this chapter,” someone identified only as “KW” wrote in the memorial post. “As the long-serving secretary of the 1853 Foundation, he sustained Lambda through good times and through times of struggle.” (Lambda is the original name of the Williams chapter of St. Anthony Hall.)

Even more suggestive is another page on the national fraternity’s website, also from 2019. It praises a Yale alum of St. Anthony Hall who, in 2016 and 2017, “drafted the documents to incorporate VLS and to structure its ongoing governance and financing.”

Reluctance to speak to the Record

Other than Burr and Smith, members of the 1853 Foundation largely seemed reluctant to speak to the Record. Using contact information in the alumni directory, the Record reached out to all living members listed on the foundation’s most recent tax return. Most did not respond to requests for comment.

The College’s St. Anthony Hall chapter existed above board for over a century after its founding in 1853. By the mid-1960s, according to Burr, it had a literary bent that distinguished it from other fraternities.

“There was no hazing of new members, and each person was required to present two creative works to the membership each semester, one major work and one minor piece,” Burr told the Record via email. “The major work was meant to be a serious piece of scholarship, and the minor one might be humor or a short story or other five-minute presentation.” While the St. Anthony Hall men had some parties, these were much more restrained than those of other fraternities, according to Burr.

In 1968, the Board of Trustees banned fraternities, effective 1970. St. Anthony Hall held out against the prohibition as long as it could: The chapter transferred its house to the College only in 1972, making it the last of the fraternities to do so. The house eventually became home to the Center for Development Economics (CDE).

Through the 1970s and beyond, several fraternities persisted in secret, typically maintaining houses in nearby Pownal, Vt. Record articles from the 1970s about the underground fraternities invariably mention Theta Delta Chi and Kappa Alpha, though not St. Anthony Hall. Still, St. Anthony Hall alum Jack Shaw ’62 told the Record in 2003 that the underground chapter had existed since 1973, the year after the fraternity yielded its house to the College.

The chapter came to light only decades later, in November 2003, as second- and third-hand rumors circulated among students and as the deans tried to crack down on the fraternity.

“Though the College has been aware for some time of the existence of St. Anthony Hall, also known as the Vermont Literary Society, the fraternity has until recently kept a low profile,” the Record reported at the time.

The Record noted that members of the co-ed fraternity met weekly “at a variety of off-campus sites, including a meeting space located in Vermont, known informally to members as ‘The Barn.’” Meetings entailed discussions of literature and personal experiences, according to the Record’s anonymous sources.

The 2003 revelations about the VLS upset students who viewed fraternities as antithetical to the College’s ethos of inclusiveness, and they dominated the opinion pages of the Record for months.

“Williams is a society based upon a spirit of openness and tolerance and equal and fair opportunity, all under the aegis of common rules,” Ben Cronin ’05 wrote in an op-ed. “St. Anthony Hall, and any other secret frats that may be here, are by their very existence contrary to that spirit.”

The deans offered amnesty to anyone who came forward as a member of the fraternity, but no one did. So the VLS quietly kept going. In December 2004, over a year after the VLS was exposed, the Record reported that although the fraternity’s numbers were dwindling, it continued to recruit new members.

“The issues you confront are the most difficult of those we now have before us,” he said, according to the fraternity’s Spring/Summer 2006 newsletter. “Nevertheless, you have an extraordinarily rich heritage. You need to think of how you will contribute to the legacy.”

The Record would like to continue its reporting on underground fraternities. If you have any information about the St. Anthony Hall chapter or similar organizations, past or present, please email [email protected]