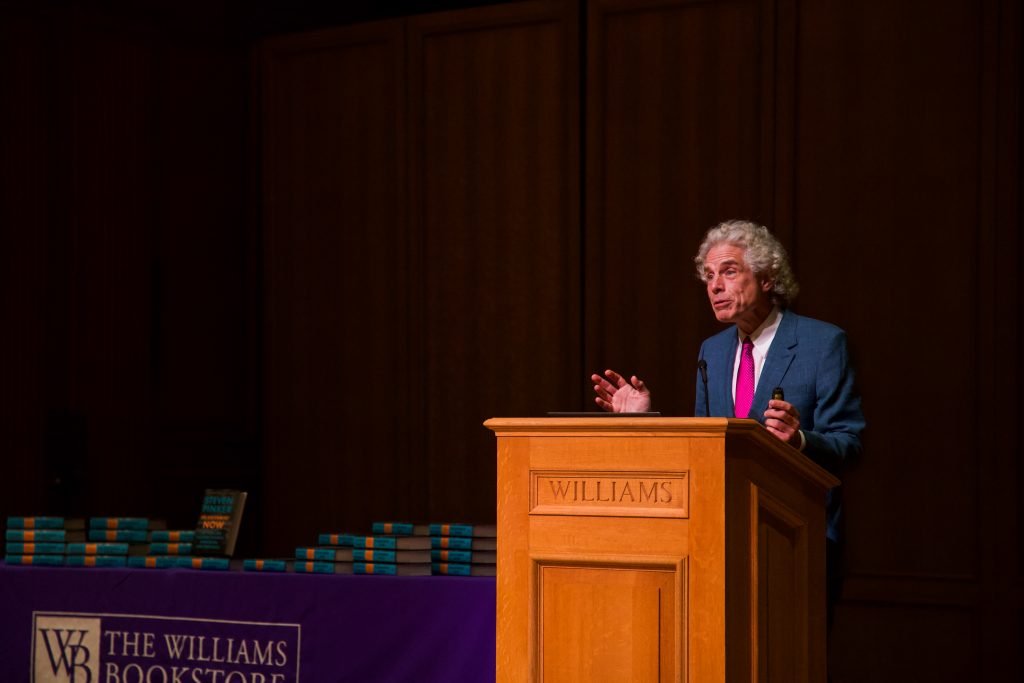 Steven Pinker argued that the Enlightenment has ushered in a golden age of human prosperity through reason, science, humanism and progress. Katie Brule/Photo Editor.

On Thursday night, Steven Pinker, cognitive psychologist and author of Enlightenment Now: The Case for Reason, Science, Humanism and Progress, gave a lecture of the same title in Chapin Hall. The event was sponsored by the Gaudino Fund and the College’s chapter of Phi Beta Kappa, which has lined up a set of speakers throughout the academic year who are meant “to encourage dialogue around human knowledge and reason.”

In his lecture, which acted as an overview of the more in-depth studies examined in his book, Pinker laid out his central argument: despite the growing sentiment that society is in some kind of downward spiral, civilization is currently in a positive state and has been progressing for centuries thanks to the ideals of the 18th century Enlightenment. According to Pinker, the main enlightenment ideal which has influenced our society is that “we can use knowledge to enhance human flourishing.” This idea has been so widely embraced and has become so central to society that we might now consider the institutions which stem from it, such as democracy or scientific academies, as standard or part of the status quo. “Other ideologies have passionate advocates, and I suggest that Enlightenment ideals, too, need a positive defense and an explicit commitment, and that’s what I’ve tried to do in the book,” he said.

According to Pinker, the idea of using knowledge to better the human experience encompasses four main themes: reason, science, humanism and progress. “Human beings, on their own, are not particularly reasonable, but people are capable of reason if they establish certain norms and institutions,” he said. That’s why, in his opinion, people have normalized free speech, open criticism, debate and empirical testing as hallmarks of a good society. The ability to “understand the world by formulating possible explanations and testing them against reality” comes from the second theme, science.

The third theme, humanism, is believing that the “ultimate moral purpose is to reduce the suffering and enhance the flourishing of human beings,” as defined by Pinker. “Now, that might seem bland and unexceptional, but there are distinct alternatives to humanism, such as that the ultimate good is to enhance the glory of the tribe, nation, race, class or faith,” he said. Pinker added that humanism is possible through sympathy, and that the number of people we feel sympathy for can be expanded through media like education, journalism and mobility.

The last enlightenment theme is progress, which Pinker defined as believing that “if we apply knowledge and sympathy to reduce suffering and enhance flourishing, we can gradually succeed.” Pinker made it clear that progress isn’t simply a question of personal perspective, but something that can be proven through studies and statistics. “The question of whether progress has taken place is not a matter of having a sunny disposition, is it an empirical hypothesis,” he said. He demonstrated that progress can be measured through life, health, freedom and knowledge, among many other factors that have advanced over time.

Pinker displayed research from Our World in Data, an online publication that presents studies showing how living conditions around the world are changing. Some of the studies included worldwide life expectancy, which has increased from an average of 30 years to 80 years in the time period between 1771 to 2015. Pinker also asserted that “the world has never been more democratic than it has been in this past decade.” Crime has also been on a long-time downward trend. “A contemporary European has about one-35th the chance of being murdered compared to his medieval ancestors,” he said.

Pinker admits that while all of these studies support the overall progress of human-kind, it is easier for most people to deny it. Some of this phenomenon can be explained by cognitive research. “People estimate risk according to how easily they can recall examples from memory,” he explained. Good news tends to build up over time, while bad incidents happen quicker, making negative stories more memorable. “News is about sudden events, not gradual changes,” he said.

Pinker continued by analyzing some questions that highlight the importance of his conclusions. “It’s not good to be pessimistic; it is better to be accurate,” he said. He elaborated that, if people believe that all of our institutions are failing due to pessimism, it can result in a defeatist attitude or dangerous radicalism rather than a focus on problem-solving. He also expressed that progress is not inevitable or something that can be taken for granted, but rather a set of problems that have been solved over time through the application of knowledge. He ended by acknowledging the gravity of the issues that we as a society face today and placed them in accurate context with past issues that humanity has been able to overcome. “The problems that we face today are unquestionably stupendous, particularly climate change and nuclear war, but the rational way to deal with them is not as apocalypses, but rather as problems that need to be solved,” he said.