One in Two Thousand: Megan Siedman ’20 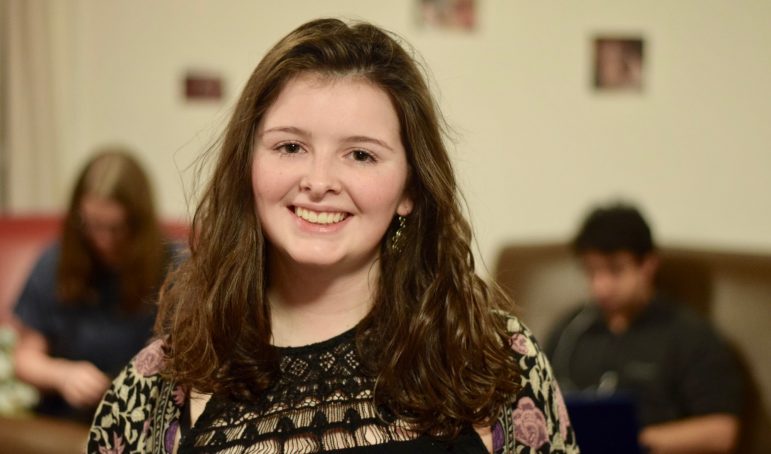 Megan, one my junior advisors (JAs) in Mills-Dennett 2, provides her frosh with countless funny anecdotes and snacks schedules organized by a secret mathematical code. We sat down to discuss gum, Kidz Bop and Lindsay Lohan’s secret twin.

IL: You’ve mentioned that a former Kidz Bop star blocked you on Instagram. Could you tell me about that?

MS: Yeah. I think it was in my junior year of high school that my sister and I took a Kidz Bop dance tutorial, and when you took it you had to take on the character of one of the people. So I was Kidz Bop Matt, and my sister was Kidz Bop Ashlynn. And so after that, anytime they posted on social media, we would comment under their posts, pretending we were them. So if they were in a picture together, we’d be like, “Yes! We’re the perfect couple. #Mashlynn.” And we decided we really didn’t like this one guy, Kidz Bop Grant, so we would comment, “Great to see you, Ashlynn, but we really need to have a band meeting – we need to kick Grant out of the band,” or “So glad we kicked Grant out of the band.” This has been going on for literal years. It’s still going on now – we still make these comments to each other.

One day, I clicked on Ashlynn’s account, and it came up with the whole, “This account doesn’t exist,” but you can tell that it exists because it has the number of posts and everything. And so my sister confirmed that Ashlynn had blocked me but not her – and Matt hadn’t blocked either of us. What we thought was great was that we know for sure now that Matt and Ashlynn have had conversations about my sister and me. And we think that’s awesome. And also that Ashlynn was probably like, “I’ll block her, but Matt, don’t block her, because I still want to see what she says.” The fact that we know that that conversation existed has really validated my life. [Laughs.]

IL: Is there anyone else notable who has blocked you on social media?

MS: Yeah. My account very regularly gets blocked by a lot of people… I’m up to 17 Instagram accounts that have blocked me, and I don’t understand how that’s possible – my account is boring at best. My ex-boyfriend has also blocked me on literally every form of everything except for LinkedIn. He’s a very professionally minded young man. Even email – but not LinkedIn.

IL: Tell me about your phobia of gum.

MS: Oh my god. [Laughs.] I think it started at my fourth-grade graduation. My sister spit her gum onto my knee when I was in my nice dress and we were heading out to Olive Garden to celebrate. And I just was fixated on it and couldn’t breathe and was so upset. Even when other people are chewing it, I hate it. The idea of chewing it horrifies me… I just am very uncomfortable with gum as a polymer.

It got worse my ninth-grade year. It was the first science project we did in biology. It wasn’t a bio project – it was just like, “Learn the scientific method!” And we had to see which gum brands would not only make the biggest bubbles but would stretch the longest. When gum stretches all the way, it can go on for several hallways because it’s just so durable, I guess. We did it in the science hall, and it got so thin that people were walking out of their classrooms and walking into it because it got so thin that you couldn’t see it. They were getting stuck in this gum, and I was just sitting in the corner, rocking, because I couldn’t handle it. And then when my mom came in for parents’ night, my teacher goes, “Oh yeah! Your kid’s the one who’s afraid of gum.”

IL: On a completely different note, what made you decide to be a JA?

MS: I became a JA for a number of very personal reasons. I didn’t always have the best home life, especially right before coming to Williams, and I had really lost this sense of home. I remember Sage A made me feel safe in a way that I hadn’t in a long time and made me feel that I was coming home to a space that actually was a home. It was warm, there were people who cared about me and I felt good in that space. And that first made me want to become a house coordinator – this idea that homes really matter, especially at a place like Williams. There’s a difference between a house and a home. There’s a difference between the dorm that you just live in and the place you feel comfortable thriving in. My house coordinator year was definitely very difficult but also very rewarding and, I think, confirmed for me that, No. 1, I was strong enough to be a JA and, No. 2, this was where my passions were. Providing people with a space where they feel comfortable was the biggest factor guiding it, among others.

IL: You’ve mentioned to your frosh that you believe in several conspiracy theories. Could you talk about some of them?

MS: I’m a huge fan of conspiracy theories. No. 1: I think Lindsay Lohan had a twin who died, and that’s why she became crazy. I definitely believe that one. I also think Avril Lavigne died and then they replaced her with her backup singer, so that’s why she sounds a little different, and her music’s a little different. And also the backup singer’s dad straight up admitted to it. They have clips. You can look it up. I feel iffy about the moon landing because I think we’ve landed on the moon by now, but I really don’t think it happened then. If you look at the footage, there’s an immense amount of evidence that just shows that everything is really off. And I think it makes sense in the context of the space race. We wanted to say we were there, you know?… I also believe in the Illuminati. I’m kind of iffy about lizard people, but Justin Bieber could definitely be a lizard person.

The one I believe in the most – this is 100 percent true – is that Mattress Firm is laundering money. If you look up Mattress Firms in your area, you’ll see that there are always, like, three Mattress Firm locations within the same street or two of each other, which is just wild, because no one buys mattresses. People buy them very, very rarely. The parking lots are always super empty. There’s no reason for them to have that many stores all within the same place. And the only reason why that makes sense is because they’re laundering money and trying to split it up between their stores to make it look like they didn’t get that money from someplace sketchy. It is 100 percent that they’re laundering money. It’s true. And also, it’s interesting and ironic because a mattress is a place you hide your money under. Boom.