One in Two Thousand: Amelia Montagnino ’24 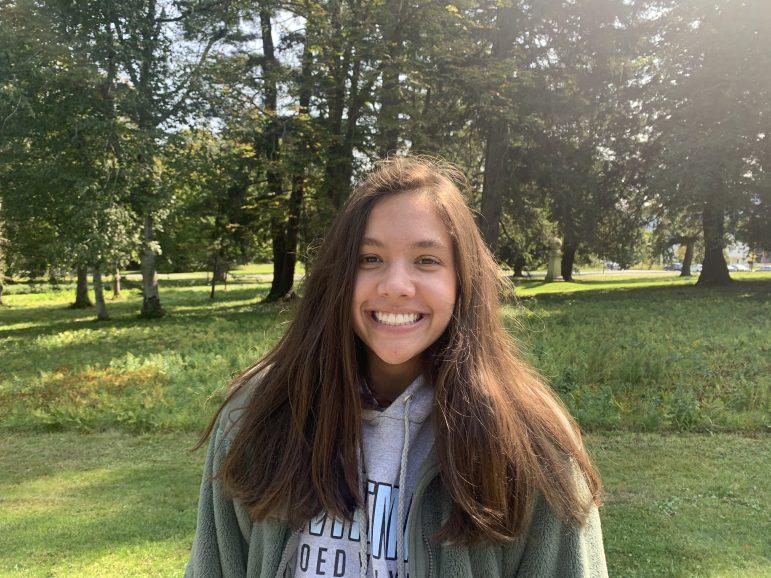 Each week, we randomly select a unix from a list of all current students at the College for our One in Two Thousand feature. As long as the owner of a selected unix is willing to be interviewed and is not a member of the Record board, that person becomes the subject of our interview. This week, we decided to draw a name from a list of first-year students, and the computer (using a script in R) chose Amelia Montagnino ’24, from Bethesda, Md., who discussed mental health advocacy, an anti-gun violence campaign and her first impression of the College. This interview has been edited for length and clarity.

We know each other through Williams Empower Through Health. What brought you to public-health–related work?

Well, in high school, mental health advocacy and suicide prevention work were a big part of how I spent my time, so when I saw [Williams] Empower Through Health and how it focuses a lot on mental health and getting that care around the world, I was really interested. I want to keep doing that type of work, so it really aligned with what I was interested in.

So I’m curious, because I did do some marginal background research, and I saw that you have produced a suicide prevention video in high school?

It’s a great watch. But what struck me the most is that it’s so carefully produced –– did you do all that work by yourself?

Yeah, I did. My sophomore year of high school, a friend and volleyball teammate of mine died by suicide. So I spent that following summer, researching and reaching out to people, filming, editing and then outreaching. That probably took me like 200 hours to do it all. But it was really rewarding and helped me kind of process everything.

It sounds like you’re really interested in public health and mental health [and] suicide prevention. So are you looking to continue exploring that interest in academics as well?

Yeah, I’m thinking about it. I’m interested in the public health concentration, but I understand that doesn’t start ‘til sophomore year. I also didn’t previously think I was interested in psychology, but kind of looking at what I’ve done with my life so far, it seems like that is something I should pursue. Then I’m also doing [suicide] hotline work, and I feel like that’s something that really gives my life meaning, so I should probably continue to explore that interest and see where it goes.

You have plenty of time ahead of you.

Yeah. There are so many exciting places where Williams can take you.

I have a big, vague question: Are you also looking to promote mental health here at Williams, the same way you tried to connect with students in your previous projects? The College has a lot of resources, but then there are also persistent problems.

Yeah, for sure. And I sadly think there always will be those problems, but I would love to do what I can. It’s all so new to me, but I definitely want to continue advocating for it. The hotline work that I have been doing is what’s pushing me to keep going. I’m joining Empower Through Health and RASAN, but I’ll definitely look into Peer Health and some other resources. It looks like there are a lot of different efforts at Williams, so I’m wondering how they work together and whether students feel like they have the support that they need.

For sure. Most students here lead a stressful life.

I saw that Williams was rated No. 1 for students who study the most.

I have not heard that, but I do hear people complaining about not being able to stay at the library past midnight. So I believe it.

It’s definitely weird being here, having all these restrictions.

It’s the first full week of college –– any moments that have shined so far, over the past week?

When we were finally able to be in a common room with people outside of the pod, it was really nice to have that community feel with other people in the entry.

How is the experience of being in a pod with six other new students?

It’s pretty crazy. And …I think they also assigned them somewhat randomly. But by chance, I actually really like my pod. And we’ve been able to get pretty close. Last night, our entry had a dance party. We were all on different sides of the common room, trying to distance.

Have you ever considered enrolling remotely or taking a gap year?

Yeah, I was actually really interested in taking a gap year. But financial-aid-wise, it didn’t make sense for my family.

What would you have done if you had taken a gap year?

That’s a good question. I was thinking about AmeriCorps for a little bit, or maybe an internship –– I had an internship with the Brady Campaign, about gun violence, so I was thinking of reaching out to them and seeing if there’s any work I can do remotely for that. I just also think that Ad Council work is really cool and amazing, so that’s something I was gonna pursue as well. I didn’t really fully explore it because the option wasn’t quite there, but I really felt like I needed that time to reconnect with myself [and] with the world. I didn’t quite get that, but that’s alright. [Laughs.]

I hope you find the opportunity to reconnect with the world at Williams as well. You mentioned working for an anti-gun violence campaign — could you tell me more about that?

The summer of my junior year, I interned at The Brady Campaign, about gun violence, and worked on their End Family Fire program, which focuses on shootings resulting from an improperly stored or misused gun in the home, which also includes suicide. And so it kind of merged those two public health problems. Before I was applying for the internship, they had this notice about a PSA competition, which I mentioned before, so I just went for that. And my submission ended up winning, which is really awesome. It’s shown nationally now.

Sounds like you do a lot of activist work. Aside from all these busy things and classes, how do you like to relax or take care of yourself?

Honestly, hotline work feels like self-care in a way to me. It helps me feel less helpless. And it feels like that’s what I’m supposed to be doing at this point. But in terms of actual self-care, I like doing yoga and art. I just got into watercolors. I also just like being outside. And really, Williams is just the perfect place to explore and be outside, so that has been really nice. I also like being with people, good food, watching something on Netflix –– yeah.

How has socialization gone for you and other freshmen? I’m genuinely curious because …I imagine it’s very hard.

I feel like it’s probably different for everyone. People have different comfort levels, and it might be different depending on where you live. But I’ve really appreciated having the entry system and a pod system in place. It was very isolating during quarantine, but my pod got on Zoom after a few days and played some games, which was really nice just to have some human contact at Williams before getting out there. And then it’s been nice to have that group of people, an amazing group of people to eat with and do things with. It helped me settle in a little bit.

You mentioned the isolation creeping in during quarantine. Was the summer before college hard for that reason?

Yeah, it definitely was. Also because of the idea of losing those senior year experiences and not having that proper closure and being able to say goodbye how I’d like to. I remember I was at a volleyball practice when the notice came out that school would be closed for the next two weeks. My heart just felt like it dropped. I looked at one of my teammates, and we just went outside and walked away without saying a word to each other. I don’t know — it was a very surreal experience. And then the next day, you’re at home and you’re taking your classes, but they only take an hour, and you can’t see the people that have made your high school experience what it was. Everyone had to deal with it, but it wasn’t not a fun experience.

Are you staying in touch with your friends from high school?

Yeah, definitely. But some of them are taking gap years at home, so it’s kind of hard.

I suppose the good news is that you’ll get to go home earlier this fall, now that campus closes after Thanksgiving.

Yeah, for sure. I have mixed feelings about that, but it’s definitely gonna be nice to go home.