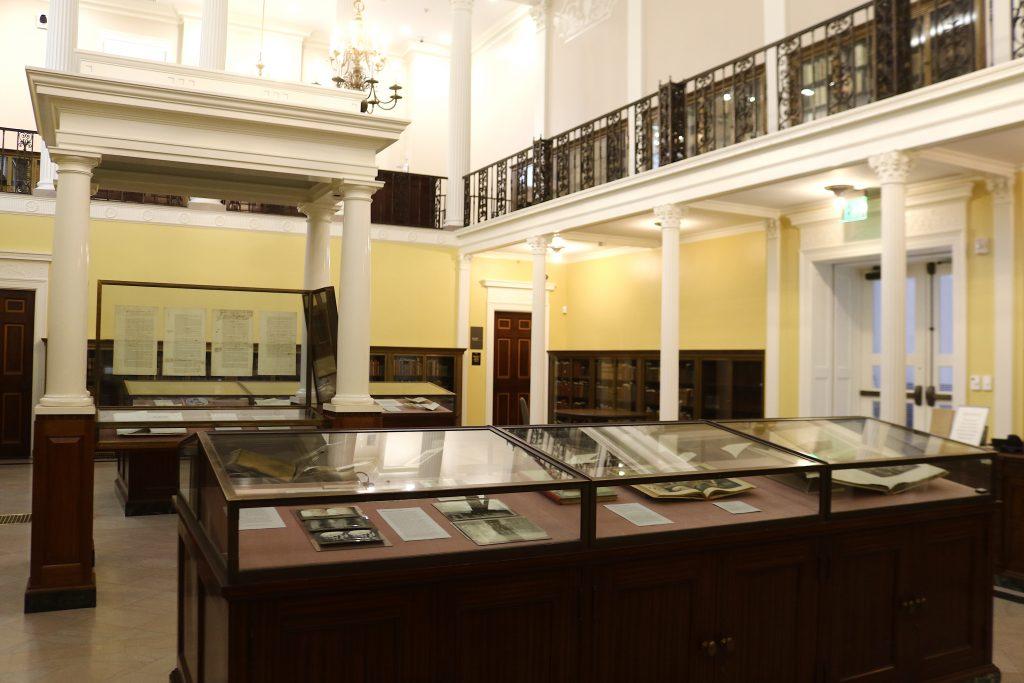 The World War I memorial program began with the French Film Festival last spring and will continue throughout the fall. Chapin Library is currently showcasing contemporary memorabilia. Sophia Shin/Photo Editor

November 2018 will mark 100 years since the end of the “war to end all wars.” As the most destructive war of its time, World War I (WWI) saw the near-downfall of Western civilization, claiming the lives of over nine million military personnel and six million civilians. In order to honor their bravery and sacrifice, the College has organized a yearlong commemoration, incorporating the archives of fellow College students and faculty who gave up their studies to fight in the war. This commemoration of the centenary was co-organized by professor of French and comparative literature Brian Martin, professor of German Helga Druxes, Administrative Director of the Center for Foreign Languages (CFFLC) Jane Canova, Sawyer Library employees Sylvia Kennick Brown, Wayne Hammond and Lisa Conathan and alums Andrea Rodas ’18 and Sophie Wunderlich ’18.

The opening event of this yearlong program started with the French Film Festival in the Spring of 2018, which presented three recent films about WWI – Christian Carion’s Merry Christmas, Jean-Pierre Jeunet’s A Very Long Engagement and Francois Ozon’s Franz. These films, released in the 1990s and 2000s, were chosen to prove “that the war still mattered, and to teach a new generation of students, faculty and staff, who don’t know much about the war because it predates even [their] grandparents, about it,” Martin said.

Continuing the commemoration, during the summer, the CFFLC, in collaboration with Sawyer Library and Rodas and Wunderlich  used the museum-type exhibition spaces in both Sawyer and Schow to curate The Great War at 100: Williams College and Beyond, displaying various memorabilia from WWI. The galleries in Schow illustrate the contributions of students, faculty and alumni, among them Major Charles W. Whittlesey, Class of 1905, and French professor Jean Norton Cru. Martin noted that during Cru’s time in the trenches, he wrote letters back to colleagues and students about his experiences, and these letters were published in The Williams Record.

Collections in the Chapin Library also showcase stories of the war through “contemporary photographs, satirical cartoons, notable poetry and prose, soldiers’ archives and other publications, including a trench map of Ypres, an army engineer’s notebooks, a delegate’s copy of the Treaty of Versailles and tourist guides to European battlefields,” according to the exhibition’s description.

In October, the CFFLC will be hosting a lecture series, inviting WWI scholars Professor Susan McCready from the University of South Alabama and Professor Raffael Scheck from Colby, which will hone in on the war’s effects in France and Germany.

Finally, the committee decided to tie WWI into fall semester courses.The comparative literature, history and German departments are offering a range of war-related classes such as “Remembering the Great War,” “The Great War,” “Reisefieber: Germans on the Road” and “Silence, Loss and (Non)Memory in Austria.”

For Martin, “World War I changed everything.” At the end of the war, European and Middle Eastern maps were completely changed due to the collapse of the  Austro-Hungarian Empire, the Ottoman Empire and the Russian Empire. “Instead of advancing culture, new technologies in the 19th century – steel which was used to make trains were now being used in machine guns and bombs – were used in the massive destruction of human bodies and cities,” Martin said. Any progress that was hoped to come out of the 19th century was used to dismantle people’s lives and cities.

However, the chaos caused by WWI was not contained to the four years. WWI’s “political and economic aftereffects were felt for years to come,” Druxes commented. Likewise, 19th century violence continued beyond the fin de siècle, leading into the “Irish Rebellion in 1916, the Russian Revolution in 1917 as well as massive decolonization in both [the] British and French Empires,” Martin said.

In addition to the beginning of the decline of European imperialism, the war spurred democratic movements, such as the founding of the League of Nations, women’s suffrage and the general liberation of women. “Some of the echoes that [students] are seeing in their own lives, such as the continual battles of racism – colonial or endemic institutional – immigration movements and wars in the Middle East, are all echoes of the First World War,” Martin said. This is why The Great War is still relevant a century after the fact. Hence, the College has come together in various ways to commemorate those who fought in the war and understand its impact. The Great War at 100 will be on display in Chapin and Schow libraries through the end of 2018, Monday through Friday from 10 a.m. to 5 p.m, and the lecture series will take place on Oct. 10 and Oct. 23.