One in Two Thousand: Jakin Miller ’24 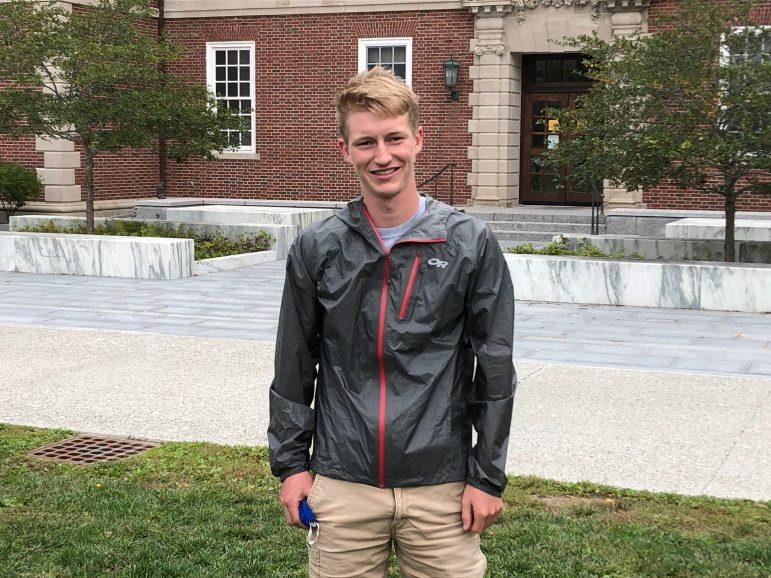 Each week, we randomly select a unix from a list of all current students at the College for our One in Two Thousand feature. As long as the owner of a selected unix is willing to be interviewed and is not a member of the Record board, that person becomes the subject of our interview. This week, we decided to draw a name from a list of first-year students, and the computer (using a script in R) chose Jakin Miller ’24, who discussed seeing a cow on Rte. 7, speaking English with Aristotle and speaking Norwegian with Norwegians. This interview has been edited for length and clarity.

I looked you up on WSO [Williams Students Online], and I saw you’re from Williamstown.

Tell me about how you ended up at Williams.

I am on the Nordic ski team, and the ski team is awesome here, and that was a big part. And it’s a good school, obviously. And I’ve never really felt the need to escape Williamstown. Like, many people don’t want to go to school in their hometown. But I figured because I had a tip for skiing, that would help me get in, and I figured, it’s a great school — I might as well.

Is Nordic skiing doing anything as a team this fall, given that sports aren’t officially happening?

Yeah, we can’t officially train. A couple of us have just been running together informally. We currently don’t have a training plan or anything.

And, I suppose, no snow.

Right. We can rollerski, but yeah.

Has your perspective on the College or the town changed since you’ve been a student?

Yeah, it’s kind of interesting to see it from the other side, because — one example is, Williamstowners always grumble about Williams students just stepping out into the road without looking. And I complained, and now I do it all the time, just because it’s what you do when you’re a Williams student. So it’s fun to see both sides of it.

Interesting. So, I’m from New York City, so I can’t drive. I can’t believe I’m putting that on the record. But I assume you drive in Williamstown.

So was that something that you had to deal with, students running past your car?

On a completely different note, do you think aliens exist?

Well, I think that life probably exists on the planets, but I don’t think intelligent life.

I think we would have seen evidence of them.

Do you have an idea of what you want to major in?

Not really. Maybe physics, but not really sure.

Do you think about physics while you’re doing Nordic skiing?

Other than Nordic skiing, are there any socially distanced extracurriculars that you’re thinking of getting involved in?

Do you have any experience with rock-climbing?

What does that mean?

I have climbed on maybe a dozen occasions, inside.

If you could get Snar — well, wait. Do you know what Snar is?

Snar is the Williams abbreviation for “Snack Bar,” the late night food. If you could get Snar with any person, living or dead, who would it be?

That’s a hard one. Probably — [Pauses.] I don’t even know where to start thinking about that one. Can we come back to that one?

Yeah, sure. I want to hear more about what it’s like to grow up in Williamstown. I know it’s a quiet place in many ways — perhaps in other ways not. But what’s the weirdest thing you’ve seen here?

What? Really? In the middle of the road?

What did you do?

Well, there were other people taking care of it, so I just biked by. But yeah, there was a cow in the middle of the road. Probably don’t get that in New York City.

No, not so much. What are you most excited about, about being here as a student?

Probably just access to everything the College has to offer, because I’ve always lived here, but I haven’t been really able to be part of the Outing Club or — I’ve been to soccer games, but it’s different when you’re a student — or be on the Williams team and study in the library and take classes and stuff.

You mentioned you were maybe interested in studying physics. What drew you to it?

I’ve always kind of been interested in machines and how things work — science, math.

Well, before I came to Williams, I could just go around Williamstown without a mask, and there weren’t really many restrictions. And now I can’t do that, obviously, and I can’t go see my family like I would normally be able to. So, not excited for kind of living only in the bubble. But there are good things about that, too.

Two miles away? It was a little funny. It was like, “Yeah, I’m going to college.” My parents were like, “Yeah, we’ll be back in ten minutes, just drop you off.” And one of the professors who was greeting everybody came in — he was my soccer coach for six years. Like, “Oh, hi. Hi, Coach.” So I’m sure it was a little different from most people’s experience.

To go back to my earlier question, who are you getting Snar with?

Who am I getting Snar with? I’ve been having to read a lot of Aristotle for my classics class and figure out what he was trying to mean. So I’d probably get it with him and ask him.

Do you think he speaks English?

Probably not, but if I’m getting it with him, then we’ll pretend he speaks English.

I assume this is your Record debut?

So is there anything that you want the Williams community to know about you that I haven’t asked you about?

I do… I studied abroad in Norway last year.

Cool. What were you doing there?

I was at a one-year school, quote-unquote “studying” sports training. I had Norwegian class and then I trained the rest of the day.

Oh, you did Nordic skiing training?

Do you ever get Pete Buttigieg references?

He ran for president and famously spoke Norwegian, and people thought he was really cool for that. What’s your favorite Norwegian word?

This word “hyggelige” [“hig-li-ya”], but it’s spelled [like] “hig-a-liggy.” I read it in a book, and someone asked me the very same question, and I said, “Hig-a-liggy!” And they laughed at me, because that’s not how you say it.

What does it mean?

What do you miss most about Norway?

Probably my friends, because I lived with them at a boarding school for a year, and then I’m not really going to get to see them again.

Did you get sent home?

Oh, that’s too bad. Well, is there anything else I should know about you other than your secret ability with Norwegian?

Not that I know, off the top of my head.