Men’s soccer edges out Amherst in last-minute save, falls to Bates 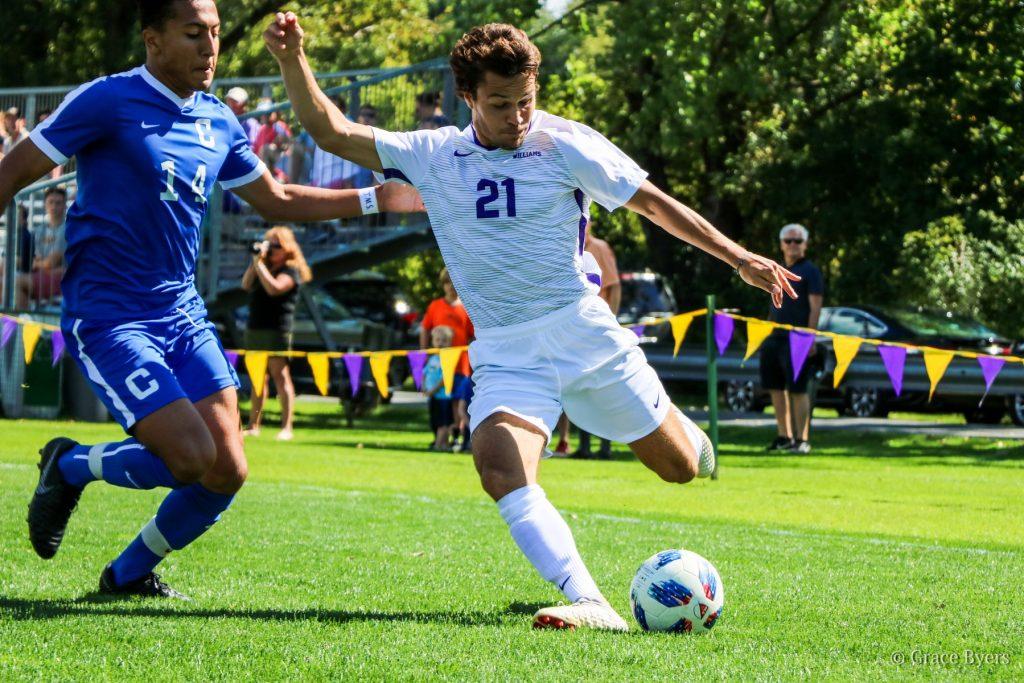 On Sunday, the Ephs started out aggressively against the Bobcats, creating multiple chances in the first half. In the 30th minute, Bobcat goalie Robbie Montanaro leaped to his left to stop a screamer from Nick Boardman ’22, and a 38th minute chance from Eric Hirsch ’19 was blocked. This defensive energy turned into offense for Bates, and their attack was spearheaded by forward Charlie Cronin’s persistent runs up the pitch, which bent the Williams defense out of shape.

In the 32nd minute, Cronin picked up the ball on the left wing and hit a ground-bound ball towards the net that was only just saved by Schein. In the 38th minute, Cronin was inches away from easily scoring off a pass from midfielder Jordan Cannon, but Cannon’s pass missed Cronin’s foot.

Following halftime, the Bobcats attacked early and often, and drew first blood in the 56th minute when midfielder Peder Bakken passed a ball that was deflected by Schein onto Eric Opuku, who poked it home to give Bates a 1-0 lead. Two minutes later, the same tandem worked again. Bakken hit the post off of a free kick, and the ball bounced right to Opuku, who merely stuck his foot out and redirected the ball into the net to double the Bobcats’ lead.

The Ephs had several chances throughout the remainder of the half – notably a frozen rope from Chris Fleischer ’20, but Montanaro and his defense played a tremendous match, displaying terrific awareness and cohesion to record the shutout.

“[It was a] disappointing performance today and a definite learning experience for us. We simply need to compete smarter to neutralize other teams’ strengths, earn more possessions and create more chances,” head coach Erin Sullivan said of the match.

On Saturday, the men outlasted archrival Amherst 2-1 in an away match.

Forward Demian Gass ’20 ripped two shots within the first 15 minutes of the match, to no avail. However, those chances were the result of constant workmanlike play from the Eph backline and midfield.

While the men were able to create several legitimate opportunities, they were tested by their archrivals, especially in the first half. Using the high-risk, high-reward “flip throw” on each and every throw-in, Amherst put the ball in highly advantageous positions near the net numerous times. Despite myriad opportunities in this manner, the Mammoths were unable to convert any of those chances.

Mammoth forward Jimmy McMillian sprinted past the Eph defense on multiple occasions, and forward Sebastian Derby happened upon the ball in Williams’ territory at several pivotal moments but failed to put the Mammoths on the scoreboard thanks to heads-up play from Eph defenders like co-captain Scatt MacDonald ’19 and Liam Bardong ’20. Both teams entered the 15-minute halftime hoping for the ball to make it past the net.

Both teams picked up in the second half right where they left off in the first. In the 51st minute, Derby got the ball at the top of the box with only Schein to beat but flipped it just right of the goal, depriving the Mammoths of the first score of the match. From there, the momentum started to shift toward the Ephs.

The Ephs blocked four Mammoth shots in the next 10 minutes and ratcheted up its defensive pressure, turning it into offensive firepower. This gradual buildup culminated in the 58th minute, when midfielder co-captain Greg Andreou ’19 got the ball off a free kick and punched it home to put the Ephs on top.

The Williams lead was doubled 15 minutes later when Fleischer attempted a cross that instead snuck past Mammoth goalie Michael Stone and into the net, giving Williams a 2-0 lead with time quickly running out.

Amherst would not go quietly, though; in the 86th minute, midfielder Dane Lind got to a ball just outside of the box, did a step-over move and crossed it to Derby, who was positioned right in front of the net. He poked it home to cut the Ephs’ lead to one goal. A minute later, Amherst defender Sean Fitzgerald headed a ball towards the goal that was only just saved by Schein, and the Mammoths started to play aggressively, even bringing Stone outside the net to the outfield. This approach paid off when an Eph committed a foul in the box in the 89th minute, setting the stage for a climactic penalty kick from defender Cutler Coleman. He struck the ball, but unfortunately for Amherst, Schein guessed correctly, grabbing it and effectively sealing a Williams victory. Schein has denied a penalty kick twice this season.

Both goalies recorded six saves on the day.

After the match, Sullivan praised his squad’s tenacious effort. “We carved out a gritty road win today led by our seniors,” he said.  “I’m proud of our entire team for the way [we] prepared for this game, competed throughout and stuck together through some rough patches at the end. These are the types of games players live for, and so many players rose to the occasion, particularly late in the match.”

Men’s soccer will match up against Conneticut College at 2:30 p.m. on Saturday.