Through Unmasked app, students share how they are really feeling 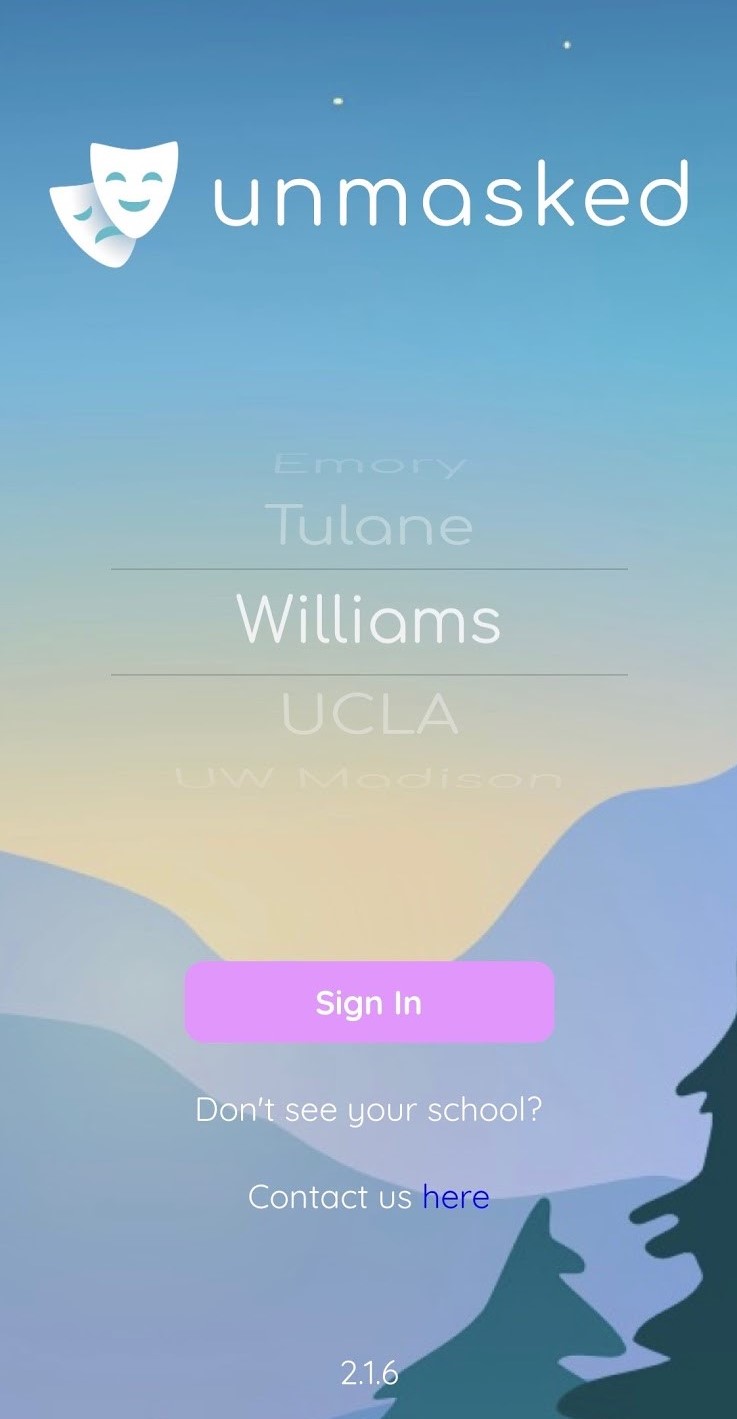 At the top of the screen reads a simple prompt: “Hi, how are you really feeling today?” Posts, arrayed on a nature-themed user interface that practically screams calm, seem to take the question seriously, answering candidly and thoughtfully. Responses range from fears that feel too mundane for in-person discussion, to critical and existential worries about life, death and the nature of happiness. Scanning through the anonymous posts, “I was just thinking about that!” quickly becomes a common mental refrain.

This is the Unmasked Project, an app that provides college students a space to discuss their mental wellbeing. The app, which has separate communities for each of its participating colleges, serves to direct people with severe mental health issues to appropriate resources, allows college students to share whatever is on their mind, and helps students feel connected to their particular college community.

Co-presidents Cailin Stollar ’21.5, Katie Nath ’23 and Claudia Iannelli ’23 brought the app to the College last spring. As of July 27, the Williams version had 297 users. It was first launched at Dartmouth by recent graduate Sanat Mohapatra, and has since expanded to nine schools, including Williams. Mohapatra said he was inspired by the anonymous social media app YikYak. While most of YikYak’s content was focused on humor, he noticed a small group of people posting about mental health. Unsurprisingly, they usually didn’t receive particularly supportive comments, and were often victims of the trolls who plagued the app. He reached out to a couple of the posters, and through a series of in-depth conversations he discovered high demand for an anonymous forum app dedicated to mental wellbeing.

“A lot of those students were not interested in using traditional resources, like they felt like they’re too busy — they’re taking too many classes,” he said. “And when YikYak finally shut down at the end of the spring, I realized like all those people didn’t really have anywhere else to go. So that’s when I started working on the app.”

But he was missing a pretty important skill. “I am an English major with a concentration in creative writing, so I’m pretty terrible at CS,” he said.

With the help of friends, a startup lab on Dartmouth’s campus and $60,000 in grant money — and after three years of work — Mohapatra launched the app this winter.

In early April, a friend of Iannelli’s who was involved with Unmasked at Dartmouth told her that they were looking to expand the app to other schools. Iannelli eagerly began reaching out to friends through group chats and social media. She ended up recruiting track teammates Nath and Stollar.

Stollar joined the project because mental health is a big part of her life. A psychology major, she is currently working in a lab that focuses on non-suicidal self-injury and identity. She also said she has anxiety.

“It’s not fun to constantly share things with your friends,” Stollar said. “One, because they might not get it, and, two, at least for me, I feel like they’ve all heard it before. They constantly hear me stressing out about whatever, and I don’t want to burden them with that.” Stollar said she thought that Unmasked would be a great way for people in a similar situation to vent their anxieties without straining friendships.

Nath joined because she went to a small, K-12 school that she said emphasized mental health, which she felt was missing from her Williams experience.

Mohapatra went to every early meeting with the Williams team to make sure all was going smoothly. Even when still in school, he called the app his “full-time job.” He often goes through the posts of each of the nine school’s feeds: Emory, Tulane, UCLA, UW-Madison, Columbia, Barnard, and Yale in addition to Dartmouth and Williams. He focuses on Dartmouth in particular, estimating that he looks through 90 to 95 percent of the posts.

After meeting with Mohapatra’s team, the trio sent out a Google Form to find moderators, who work to ensure that the app remains a safe space. The new Williams moderators then went through online training. During their shifts, moderators go through recent posts and comments to make sure none of them are hurtful, and they address potentially dangerous situations. They also make sure every post has at least one comment.

“We were only looking for a couple of moderators, but we got over 20 applications,” Iannelli said. “Then we had to narrow that list down, and we prioritized upperclassmen and people with experience with mental health.”

During interviews, the applicants impressed the co-presidents with their enthusiasm.

“People were really jumping at the opportunity, Iannelli said. “It was really amazing.”

Stollar added, “A lot of them had personal experience where mental health affected them in one way or another, whether it was a family member, a friend or themselves, personally. Having that experience, we found it made them even more passionate to want to help others and want to bring this platform to everybody.”

As the app has grown at the College, the organizers have arranged themselves into three teams: product design, marketing and moderation, though all organizers continue moderating shifts.

Adrienne Conza ’21, a moderator for the app, said she thinks the anonymous nature of the app is key. Along with being a moderator for Unmasked, she is also a Peer Health counselor, which works similarly to Unmasked. She can refer someone who comes to her to the appropriate resources and offer support, but without the anonymity. Having to interact with someone physically might deter some from using the service, she said.

“I saw a psychiatrist a few times in my freshman year when I was struggling more,” she said. “It didn’t really work out. I didn’t really click with the guy. I didn’t feel comfortable talking with him because I am a very private person, so I think that the anonymous element of the app is really helpful.”

Sam Jocas ’21, another moderator, said the anonymous feature allows users to be more candid about how they are feeling.

“It’s really difficult, I think, to reach out when you’re by yourself and you want to talk about a mental health problem you’re having, especially when people know it’s you,” he said. “It is important now because people are having a lot of intense emotions and most people don’t have access to therapy when they’re at home in quarantine.”

For people struggling with their mental health, the app offers various professional resources for mental health, both college specific and otherwise, such as various hotlines, administrators to contact, and talk therapy resources.

A recent addition of the app links to BIPOC-specific resources such as Blackline, Melanin and Mental Health, National Queer and Trans Thearpists of Color Network and more. “We feel that a lot of mental health resources are tailored, whether intentionally or not, toward white communities,” the co-presidents wrote in an email to the Record. “These specific resources provide support to BIPOC in a way that they may normally not feel supported in this space.”

Conza added that the app is also just a forum for people to share whatever is on their mind, be it movie recommendations or anxieties, in addition to difficult emotional problems.

Unmasked user Oliver Cohen ’23 said he has used the app to work through some of the sadness and anxieties that came with campus closure and being in isolation.

“I feel like I’m in a really good place right now and don’t feel like I have a lot of reasons to seek more mental health services than I have used in the past,” he said. “That being said, I am missing my friends a lot and am uncertain about the fall. In my case, Unmasked is the perfect way to talk about those things that are on my mind.”

Another user, Caroline Galo ‘21 said that while she has not yet posted, she consistently reads through the posts because it helps her feel connected to the Williams community.

“Last night when I checked it, there was a thread of people whose summer internships were canceled, and mine was canceled as well. It was really helpful to see people at Williams going through the same thing,” she said.

After the moderators and co-presidents promoted the app on social media, several incoming first year students have begun using the app. They, too, worry about the fall.

“Many of the ways they typically would learn about the Williams experience (previews, on-campus summer programs, etc) have been canceled due to COVID,” the Williams Unmasked co-presidents said. “The Unmasked app gives them a space where they can ask Williams students with varying backgrounds and experiences questions about Williams and with none of the pressure of having to share their identity.”

As the return to school looms, the co-presidents hope to continue spreading the word to increase their user base when school begins. Once on campus, they plan to do more advertising and outreach.

In the future, the app itself may undergo changes. Mohapatra hopes to develop group messaging and customized feeds where you can search for certain topics. He also plans to continue spreading it to as many schools as possible.

As the app continues to grow, adding more schools with distinct cultures and student needs, a fundamental goal of the app will remain the same: to create a space where classmates can validate and respond to each other’s feelings.

“There’s not a good way to know how people are really feeling,” Mohapatra said. “But this is a cool way to start to understand.”