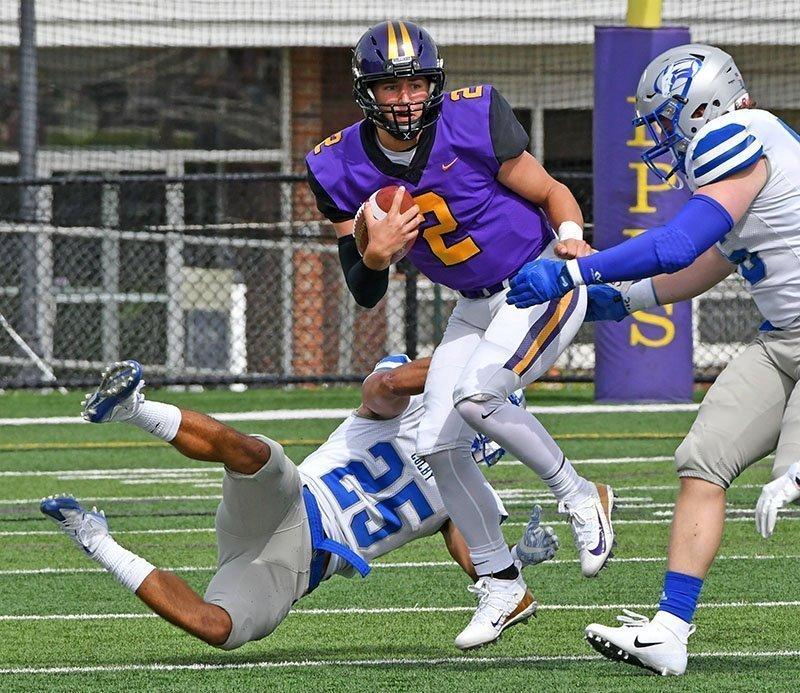 A momentum-changing special teams play, a record-tying four rushing touchdowns from quarterback Bobby Maimaron ’21 and a career-best performance from running back TJ Dozier ’21 sparked football’s (2-0, 2-0 in the NESCAC) 36-14 win over Colby in its home opener.

The game’s only turnover came on a play in which Colby punt returner Alex Sands fumbled the punt, which was then recovered by defensive back Christian Dumons ’19. Two plays later, Maimaron kept the ball on a read-option play and ran into the end zone for a touchdown, giving Williams a 6-0 lead it wouldn’t relinquish.

Despite this, the Eph offense didn’t jump off to a great start, as Maimaron completed just three of his first 11 passes and the Mules defensive line generated consistent pressure up the middle. But the turnover towards the beginning of the second quarter gave Williams’ offense plenty of momentum, as it scored 15 points on its last three drives of the half.

Towards the end of the first half, with Williams holding a 9-0 lead in what was still a close game, Maimaron orchestrated a two-minute, 80-yard drive that culminated in another touchdown run by the quarterback. Maimaron wasn’t dominant through the air (8-for-18, 110 yards); instead, he did most of his damage on the ground, tying his own collegiate record with four rushing touchdowns.

The Ephs started the third quarter with two quick touchdown drives, highlighted by an improved passing attack and multiple chunk plays by running back Dozier.

By the end of the third quarter, Williams had already taken an insurmountable 36-0 lead. In the fourth, Colby finally got on the board with two touchdowns to cut the deficit to 36-14, but the Williams offense was able to run out the clock on its next drive to improve to 2-0.

The Ephs’ defense was extremely stout, limiting Mule quarterback Jack O’Brien to a 1-for-8 passing day for just three yards, which in turn led to quarterback Matt Hersch taking over towards the end of the second quarter. After holding Colby to seven straight punts in the first half, the Ephs didn’t allow a single point until the fourth quarter for a second straight week.

Dozier, one week after piling up a career-high 128 rushing yards, broke his own record with 160 yards on just 19 carries. Averaging an impressive 8.4 yards per carry, Dozier consistently broke tackles and juked defenders, gaining 15 yards or more on five different rushes.

But his most impressive play on the game came on a bulldozing nine-yard touchdown run in the third quarter, in which he took two defenders with him and lunged for the goal line to break the plane. The score put Williams up 29-0.

Dozier reflected on the all-around team effort. “The chemistry we had between the running back, quarterback, the offensive line … it was perfect,” he said, while making sure to emphasize the standout performances of his teammates after the game. “I can’t take all the credit because the offensive line did an amazing job today.”

Despite the final score, there were still many areas of improvement for the Ephs. Williams converted just two of 11 third-down opportunities and committed nine penalties for 62 yards, compared to just three for 32 yards for Colby.

“I think we got a little ahead of ourselves, trying to do too much early, rather than just execute, and we made some critical errors,” head coach Mark Raymond said of his team’s first-half performance. But Raymond was nonetheless thrilled with the Ephs’ strong start to the season. “We’re always happy to be 2-0. Wins are hard to come by, and you cherish every single one of them,” he said.

Next Saturday at 1:30 p.m., the Ephs will host Trinity in what should be an exciting matchup between two undefeated teams.