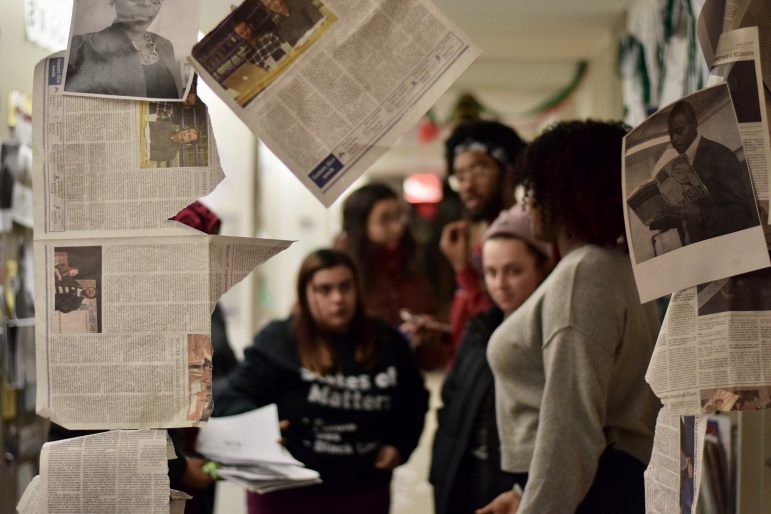 Students rebuild the memorial in Hollander Hall after the original one was deconstructed by a faculty member. SABRINE BRISMEUR/PHOTO EDITOR

Students rebuild the memorial in Hollander Hall after the original one was deconstructed by a faculty member. SABRINE BRISMEUR/PHOTO EDITOR 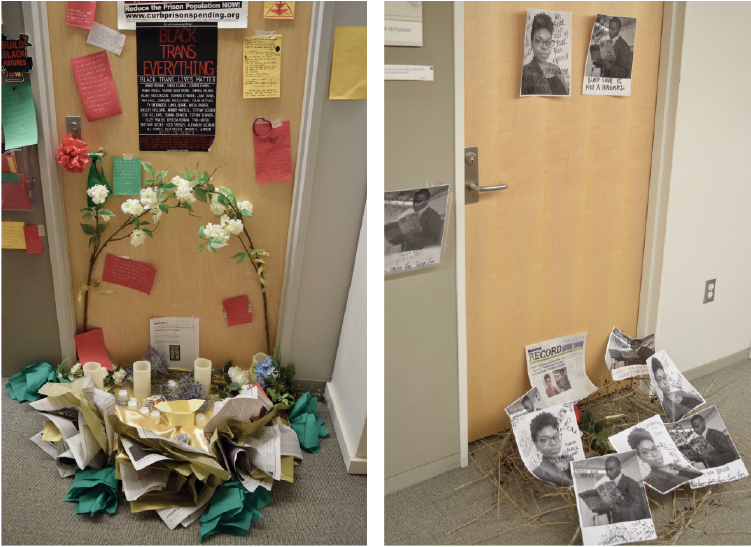 On Monday, students took down portions of an installation honoring Assistant Professor of Women’s, Gender and Sexuality Studies Kai Green ’07 and Assistant Professor of English Kimberly Love in Hollander Hall at the request of President Maud Mandel, who cited fire code and Americans with Disabilities Act (ADA) violations. Students first began placing the installation in Hollander on Feb. 9. On Feb. 13, Keith McPartland, associate professor of philosophy and chair of the Schapiro-Hollander users committee, deconstructed and moved parts of it after clarifying with Head of Campus Safety and Security (CSS) David Boyer and Manager of Safety and Environmental Compliance Frank Pekarski that the installation violated fire codes. Neither Boyer nor Pekarski, however, instructed McPartland to remove the installation. After the partial removal, students created an even larger memorial. They relocated parts of it after Mandel confirmed that the installation was in violation of “both state law and campus policy.”

The original installation – composed of flowers, poems, copies of the Record, Feminist Wire articles, artwork and notes  – spanned a hallway on the first floor of Hollander Hall and gave students an opportunity to express their solidarity with and support for the professors, who each cited institutional violence as the reason for taking leave before the start of the spring semester. The installation covered portions of the wall, though materials were also placed on the floor and the doors of the two professors.

In an all campus email yesterday, Mandel explained that last week, senior staff decided that the memorial materials “weren’t impeding movement through Hollander and should be left undisturbed for a period of time,” yet that they “would eventually have to be moved.” The email continued, “Our plan was to allow them to remain until we could discuss long-term options with students.”

Pekarski said that while  he and Boyer were both instructed not to move the materials, he informed McPartland that the installation had violated fire codes but did not explicitly ask McPartland to remove the materials. Acting as chair of the Schapiro-Hollander users committee, which works to adjudicate issues within the buildings, McPartland deconstructed parts of the memorial. Some students expressed disaproval of McPartland’s decision.

President Mandel ended yesterday’s all campus email with a call for unity.  “I also believe Williams has what it takes to persevere and transcend its challenges to become a better place,” Mandel wrote. “In fact, I believe we have to. I’m grateful I’ll be working toward that goal in partnership with all of you.”

To some students, Mandel’s calls for cooperation rang hollow.  “I am highly critical of the fact that President Mandel’s most recent email prioritizes the defense of Professor McPartland, rather than interrogating the biased and violent removal of the shrines that he enacted,” Minority Coalition co-President Tyler Tsay ’19 wrote.  “He took it upon himself to reach out to CSS and EHS [Environmental Compliance], seemingly looking for any excuse to remove the materials; he took it upon himself to walk across to Hollander to remove the materials, even though senior administration was already dealing with it directly with students in a much more appropriate manner.  Even if he did not intend his actions as violence (and that is up for debate), they certainly were violent in their result.”

On the morning of Feb. 13, Boyer reached out to Pekarski. “I contacted Frank Pekarski when I heard that he was reaching out trying to get the items moved,” Boyer said. “[I] was told that the items in Hollander Hall were a clear violation of the building/fire codes and that the items had to be removed from the hallway.” In an email to the Record, Pekarski confirmed that the installation, as it was originally constructed, was in violation of the fire code. Pekarski said he was told “that the memorial wasn’t to be moved while things were sorted out,” and Boyer said that he was instructed “that the items were to remain and not be disturbed by anyone in CSS.”

“At the end of our conversation it was not clear who was going to remove the items,” Boyer said. “I gave Frank Pekarski the name of professor Keith McPartland, who is our listed contact for building matters in Hollander.”

Pekarski said that he told McPartland “there were fire code issues,” though he noted that he “didn’t tell [McPartland] to remove the materials.”

McPartland contacted Boyer that day. “I talked with Professor Keith McPartland prior to the items being moved and told him about my conversation with Frank Pekarski,” Boyer said. Boyer did not send anyone to Hollander Hall, telling McPartland, “[This] was not our area of expertise or enforcement.”

That evening, students began construction of a new, larger installation. Printed photographs of Love and Green, copies of the Record and articles from the Feminist Wire – including the piece Love and Green co-authored – were hung from the walls and ceiling.

Photos of Love and Green were placed on McPartland’s door, and a wreath of sticks were placed on the ground in front of it.  Messages from the students were written on the pictures of the professors, including “Black Love is Not a Fire Hazard,” “We Remember” and “Free Speech At What Cost?” with the hashtags #BlackLives Matter, #SayHerName and #WeRemember written over the pictures as well.

That night, a banner reading “Black Love is Not a Fire Hazard” was raised over the fireplace in Paresky Center.

On the morning of Feb. 14, Mandel sent an email to the student body addressing the removal and reconstruction of the installation. “I am deeply distressed by any interference with students freely expressing themselves in a way that is not disruptive,” Mandel wrote. “I want to make clear that I fully support those who were expressing their thoughts and feelings through the content that was removed.”

That night, students placed fliers of McPartland in Hopkins Hall.  The posters, which were taken down by College staff that following morning, read: “Keith McPartland. We Charge this man with the destruction of Black Existence on this Campus.”  The fliers also quoted civil rights activist Malcolm X, reading, “I charge the white man with being the greatest murderer on earth… Everywhere he’s gone he’s created destruction.”  In her email on Feb. 19, Mandel called the fliers an “incendiary, offensive and damaging attack has no place at Williams.”

As the installation remained, students added their messages.  On one wall, covered with a sheet of paper, students wrote messages criticizing both McPartland’s decision to remove pieces as well as the College at large.  Messages such as “Respect Our Mourning,” “Look They Hate Us” and “When can I be free to learn”  were written across the wall.  “To Idle is To Hurt” and “We Are Hurting” were written on the wall and floor with newspaper.  The memorial expanded as the days passed.

On the afternoon of Feb. 18, students looking after the installation were told by Mandel that the memorial was in violation of the fire code and ADA regulation.  Before the end of the day, in compliance with regulation, the installation had been moved from the hallway to the front of Hollander Hall.