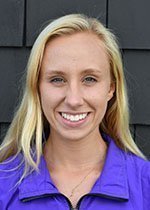 I started running cross country in fifth grade. I ran on the USA Track and Field cross country team, and I was really bad at it to start. I came in second to last in one of our first races. I would run, and if I got tired, I would start to walk. I had a nice time, but I just didn’t do very well. I continued competing through middle school and high school. Then, I started to enjoy the competitive aspect of running more. I also started to do track in middle school and did the longer distance track races. In high school, I took running more seriously and began thinking about fitting it into my college experience. Running has been my main sport for most of my life.

Why did you decide to attend the College?

It was in large part because of running. I was deciding between here and a pretty similar small liberal arts school. Their program was Division I, so I wouldn’t have been able to run there. As I was making a decision, it became pretty apparent to me that I wanted running to be a part of my life. I would be really sad to not have it. I wanted to compete on a team that really had competing well as one of their goals. That was important to me, and it was a big deciding factor. I also love this area. There are also the typical reasons of wanting to go here, like it being a small liberal arts institution with the focus on undergraduates.

What goes through your head when running?

I got really into long runs this summer. Something that is cool about those is that I either really don’t think or I reflect about something that is going on in my life for an hour and a half or two hours. It’s a cool period to reflect and not think about anything in particular. In races and workouts, I focus on where my teammates are in relationship to me. I try and run and compete with myself. I don’t do this all the time, but sometimes I write a word on my hand so when I look down in a race it reminds me of something. What I try to think about is running with a purpose. What that is changes from race to race. Sometimes it’s competing for your teammates or yourself. I would say I don’t really think about anything in particular.

We have an annual run at Mt. Greylock. We all start at the bottom together and run up. The first three miles are very steep, so we kind of separate out into smaller groups. You end up running with two or three people. It’s a really cool opportunity to surmount this really big thing with a couple other people. I’ve heard a lot about how shared adversity brings people together, so this is a cool opportunity for that. As you are finishing, the people who have already finished are lining the sides of the big monument, and so you run it and the people who have already finished are cheering you on. You go up, touch the monument and cheer on the other people who are still finishing. Coach Pete [Farwell ’73]  brings up apple cider and cider donuts, and it’s a great time. Another team tradition is our goals meeting. We had it last week, so that is fresh in my mind. This year, we had a really nice conversation that many people contributed to. A lot of people’s goals centered around continuing to find the joy of running and making it the focus of the season.

What’s your relationship with Farwell  and co-captain Lindsay Klickstein ’19?

I think it’s so unique to have a coach who isn’t focused on having you run at a certain pace during your run and run a certain number of miles. Having someone who is more focused on the joy of running and being in a beautiful place and getting to know people on a deep level as you run is so unique in a college coach. Lindsay and I have been running on the team together for four years. We really became good friends over the course of our sophomore year when we were training together more. Unfortunately for me, she did the Williams Exeter Program at Oxford, so that was sad, since she was not here for the whole [junior] year. She left for Oxford in the end of September. However, she was present in the month of September, and it was really fun to continue to run with her for at least part of my junior year. She really loves the team, so she came to a lot of the races over the course of the fall when she could. We are living together in Lambert this year. Before races, we usually have snacks; somebody usually bakes something and we hang out the night before a race. We’ve hosted a couple of those.

What is your favorite memory with the team?

This is definitely one of my favorite memories. It was last year towards the end of the season. There weren’t a ton of people practicing. We did this workout on the golf course after daylight savings time. It was getting dark really early, so we were on the golf course together in the dark. It was at a point in the season when everyone was feeling really fast and strong. So, it was fun to do that. We did part of the workout on the golf course and the other part on the track under the lights. It was cool to be all together and feel really strong. I also love the late fall weather and all of our runs at that time of the year.

How have you developed as a runner over the past four years?

When I came in my freshman year, I hadn’t been able to run for the entire month of August because I sprained my ankle many times. That wasn’t great because for cross country, summer training is kind of important. I had kind of a slow start. I was running to be running and didn’t think I was too much in a position to be competitive. I worked my way up through the season, but the focus of that season was to just be out there. Over the last three years, during the summer and the season, I’ve worked my way up a little each season, which has been really cool. Last year, I was part of the crew that got to go to Nationals for the first time, and that was exciting to be competing with my teammates at that level. I wouldn’t have been able to do that at a Division I school. That had been a big goal for me coming into Williams. This summer I had a really solid training. I think I am probably in the best shape I have ever been in, which has been pretty exciting.

It’s pretty close this year. We all enjoy running together obviously, but people are finding a lot of ways to be together outside of running, which is pretty cool. That is something that hasn’t been the case in past years as much as it has been this year in my opinion. Being friends with people outside of running and taking interest in their lives contributes a lot to the team dynamic. You trust people both on and off the course.

Do you feel pressured to lead the team?

Any pressure that I feel is self-imposed. Something that Lindsay and I noticed is that people have stepped up to leadership roles without Lindsay and I doing anything. A lot of younger girls on the team have taken on leadership roles and feel comfortable taking on those roles. That is something Lindsay and I really appreciated. In general, it makes it a more collaborative atmosphere. Lindsay is [also] really good at connecting with people and makes that one of her priorities, which I think has contributed a lot to our team dynamic.

How do you connect with different running groups, since not everyone runs at the same speed?

One way we try to do that is through team snacks and goals meetings. Those are a couple of  times when we sit down and focus on getting to chat with everyone. We have been incorporating more doubles this year. Once a week, the coaches would recommend running in the morning and running in the afternoon, so that is good opportunity. The morning run is pretty chill and is just for the sake of getting out and getting your legs moving. That has been and will continue to be a chance to get to run with people who you don’t run with normally. We all also go to dinner after practice. That is a nice time to debrief and get to know more about people. Just by the nature of this sport, if you end up running with people who are around your pace, it’s easier to develop a friendship because of the time you have spent running together. On a team with so much breadth, that is something we have to be very deliberate about.

What is the relationship between the women’s and men’s team like?

We do quite a bit of stuff together. We are basically one team. The men and the women will almost always do the same workout. The men definitely will do it a little faster, but they are not doing more, which is cool. From time to time, people from different teams will run together, but that is not the norm. Sometimes we have coed snacks. We also have team t-shirts that we make every year. This year, the men and women have the same t-shirt to foster a one-team mindset.