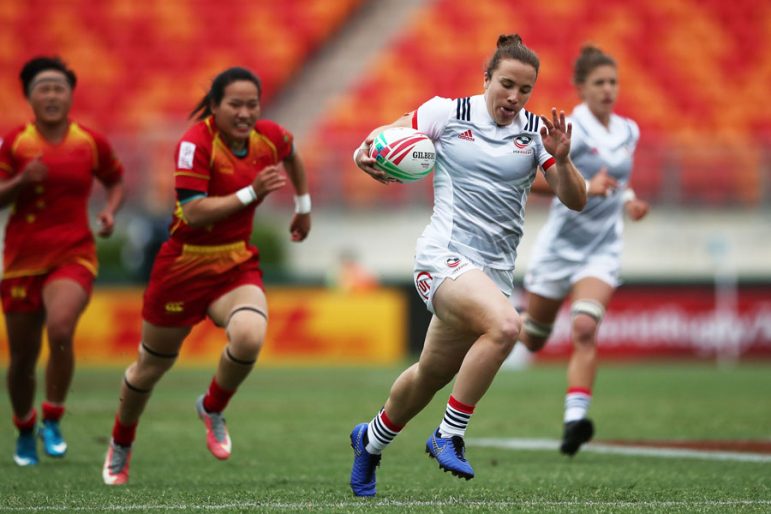 Kristi Kirshe ’17 is one of the most decorated players in the history of the College’s women’s soccer program, but on Jan. 31, she made her debut at the highest level of a completely different sport.

At the tournament, Kirshe helped the USA Eagles take the bronze medal and move into second place in the overall standings. The top four teams in the standings at the end of the season clinch an automatic berth to the 2020 Summer Olympics in Tokyo.

“We called it ‘Statement Sydney,’” Kirshe said. “We really wanted to make an attacking statement and just kind of show the world all the hard work we’ve been putting in.”

Kirshe, who started playing rugby only 11 months ago, stepped up when leading scorer Ilona Maher suffered an injury minutes into the first game. Over the course of six games, Kirshe notched a team-high 5 tries – the rough equivalent of a touchdown in American football. The 5 tries tied for fourth most among all players in Sydney.

A variant of rugby union, rugby sevens – in which each team has seven players on the field, and each game lasts 14 minutes – is becoming increasingly popular around the world for its fast pace and highlight-reel tackles. The sport was added to the Olympic program for the Rio Games and proved an immediate hit.

Kirshe learned about the game from a high school friend and joined the amateur Boston Women’s Rugby Football Club last February while working at the Boston law firm Ropes and Gray. About six months into playing, Kirshe began to realize that she could play rugby professionally.

“Some of my friends started hyping me up about it,” she said. “Some people would make comments about it, about getting onto [the Olympic Training Center team] and the possibility of that and I just tried to take it one step at a time … not to get too far ahead of myself.”

After strong performances at several club tournaments over the summer, Kirshe earned a spot on the developmental national team in September. She impressed at a competition in Japan and was named to the residency program for the senior national team in January.

Kirshe has since left her position at Ropes and Gray and moved to Chula Vista, Calif., where she lives and trains full-time as a professional athlete for USA Rugby.

“I really thought that my shot at the Olympics was gone once I stopped playing soccer,” Kirshe said. “And so it’s a dream I kind of gave up on a long time ago, but it’s pretty unreal to be in a position again where I’m chasing it down.”

While she took her first big strides toward that dream with her performance in Sydney, Kirshe did not enter the tournament with high expectations. “Personally, I was just honestly happy to be there,” Kirshe reflected. “I wanted to make sure that I just did everything that I could with the minutes I got and make sure that I was just focusing on the team mentality and the team gameplan.”

The injury to Maher less than a minute into the first game against China quickly posed problems for the team. Heavy underdogs heading into the match, China scored the first try of the game and followed with another in the seventh minute to take a 10-7 lead into halftime. While the Eagles pulled ahead in the second half, Kirshe subbed in at the 12 minute mark and secured a win for her team. Out of a scrum, she received a pass and beat her defender one-on-one before racing to the end zone for her first try for the Eagles.

“It was pretty unreal,” said Kirshe, who credited the turnover forced by teammate Kasey McCravey for creating a set piece opportunity. “I saw the gap and I was just like, ‘OK, I’m gonna take this.’

Kirshe followed her try-scoring debut with another appearance on the scoresheet in her next game, against Spain. Entering the game in the sixth minute, Kirshe reached the end zone in the eighth minute. A second-half defensive collapse from the Eagles, however, squandered the game to the lower-seeded Spain.

With the surprise loss to Spain, the women faced a must-win match against Australia, the home team and the reigning Sevens Series champions, to stay alive in the tournament. With the standings for Olympic qualification on the line, Kirshe earned her first start.

She recalled that the team focused on improving ball security and “just coming out absolutely on fire” before the game. “Everyone was fired up for that game,” she said. “Everyone was so ready to play, especially after the disappointment with [Spain].”

After teammate Jordan Gray-Matyas opened the scoring in the second minute, Kirshe added a second try in the fifth. Another teammate, Naya Tapper, joined Gray-Matyas and Kirshe on the scoresheet two minutes later to seize a commanding 19-0 lead. “In a game like that, once you score the first two, you have the momentum at that point,” she said. “So we tried to run with that momentum for as long as we could.”

While Australia mounted a comeback in the second half, it was too little too late for the hosts. With a narrow victory in the last game of pool play, the Eagles had clinched a spot in the tournament playoffs with a 19-12 victory.

Following a 7-5 defensive triumph over Russia in the quarterfinals – a final score indicative of wet weather and poor field conditions – the Eagles encountered their toughest test of the tournament in the semifinals: New Zealand. Nicknamed the “Black Ferns,” New Zealand had easily claimed first place at the previous two events on the Sevens Series tour, winning every game by at least seven points. Kirshe started the game, but the Eagles did not have an answer for the Black Fern attack. New Zealand advanced by a score of 29-5.

“It was a grueling game,” Kirshe said. “It’s really hard to play defense for that long. Obviously, not the result we wanted, not the showing we wanted to put on against New Zealand. But you know they’re the best team in the world for a reason. I think we have a lot to learn from playing against them.”

Although the Eagles were eliminated from title contention, a third-place game against Ireland remained – a chance to win a medal and earn points in the standings. Kirshe said that the team also used the disappointing loss to New Zealand as added motivation.

With a 26-10 win over Ireland in which they never trailed, the Eagles redeemed themselves and walked away with the bronze medal. Kirshe scored 2 tries in the medal round game, one in each half. 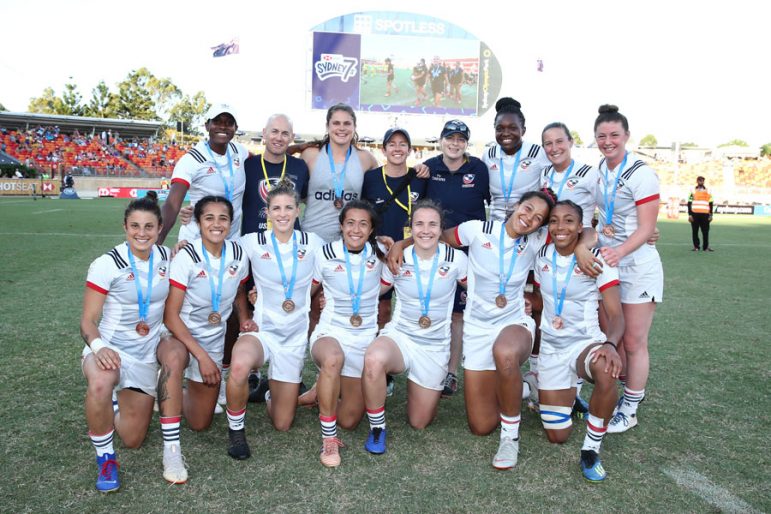 Kirshe is one of 24 members of a USA Rugby residency program, 12 of whom traveled to Sydney and claimed bronze medals. Photo courtesy of KLC Fotos.

Kirshe discussed the camaraderie of the rugby community off the field. She said that the women’s teams all stayed at the same hotel in the Olympic Village from the 2000 Sydney Games. “Rugby’s a sport where people are really good at separating what’s on the field versus off the field,” she said.

Kirshe also reflected on the opportunity to travel to Australia. “I never thought I’d actually get to go,” she said. “It’s not someplace that I think I would ever have taken myself.” The team got a day off for sightseeing and visited the Sydney Opera House. After practicing in 100-degree summer temperatures, the team also cooled off at the beach.

Looking ahead, the next Sevens Series event is scheduled for mid-April in Kitakyushu, Japan. Kirshe explained that for every tournament, the 24 players at the facility in California compete for 12 spots on the roster. “It’s a new pool of players almost every tournament, so it’s not something that you can really count on,” Kirshe said. “You really have to work for it, day in and day out.”

The constant competition for positions on the national team roster is fitting for a sport with frenetic, back-and-forth gameplay and sudden momentum shifts.

“It’s a game that can change at any instant,” Kirshe said. “It’s just so crazy. You literally can’t stop playing for a second because it can change the entire game.”

After scoring 5 tries at her debut tournament and helping the Eagles clinch the bronze medal, the momentum is all with Kirshe right now.