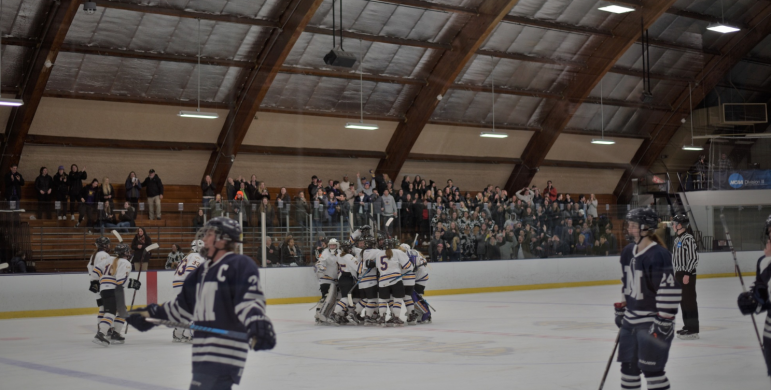 Last weekend, No. 10 women’s ice hockey (17–4–3, 10–4–2 in the NESCAC) recorded its first-ever regular season sweep of No. 8 Middlebury, taking two games by a score of 2-1 on back-to-back nights. The Ephs clinched first place in the NESCAC standings, securing home-ice advantage through the conference tournament for the first time in program history.

The women opened the weekend at Middlebury on Friday night. With the game tied at 1 in the third period, a power play goal from Bri Laycock ’22 gave the Ephs their first win in the Panthers’ rink since 2006.

The Ephs started out the night taking two penalties, although goalie Chloe Heiting ’22 and the penalty kill were able to keep the Panthers off the scoreboard. The Ephs had a power play opportunity later, but neither team scored in the first period.

The Ephs took the lead in the second period after a successful penalty kill. At 15:29, Meghan Halloran ’21 went low to high to Mia Carroll ’20, who then passed back to Halloran. Cutting the seam, Halloran received the puck and shot short side past the glove of Panthers goalie Lin Han for the first goal of the game.

Only minutes later, however, Middlebury tied the score with a goal from Jenna Letterie right before the end of the period.

In the third period, the Ephs had to kill off a penalty to Anna Fucillo ’19 for holding at 3:44. Then during the second of two power play opportunities, they pulled ahead. Delaney Szlezyngier ’22 kept the puck in the zone at the point and put a shot on the net. Gabi Montembeault ’21 redirected the shot, and Laycock buried home the deflection in the slot with 10:38 remaining.

For the remainder of the game, the Ephs prevented the Panthers from equalizing, successfully killing off a penalty to Brynn Puppe ’21 for interference at 12:57.

By the end of the night, Heiting had saved 27 of 28 Middlebury shots while Han had saved 13 of 15 shots.

“The penalty kill was great. I thought the whole team did a great job of getting in ones and clocking shots,” head coach Meghan Gillis said after the game. “The third period was our best period, and we hope to build off that.”

Back at home on Saturday night, Avery Dunn ’21 scored 1:54 into overtime to make the difference. The victory was the Ephs’ first-ever over the Panthers at Lansing Chapman Rink.

The Ephs scored the first goal of the game near the end of the first period when Elizabeth Welch ’22, assisted by Dunn and Michaela O’Connor ’21, shot between the pads and buried the puck.

After the opening goal, the Ephs controlled the game, out-shooting the Panthers 9-5 in the first period.

At the beginning of the second period, the Ephs successfully killed off a penalty to co-captain Abby Brustad ’19 for hooking. Despite the one-player disadvantage, the Ephs appeared to score during the penalty kill, but the goal was waved off.

For the remainder of the period, Middlebury outshot the home team, but Heiting made sure the Panthers did not equalize the score with 11 saves.

Despite some successful penalty kills at the beginning of the third period, the game became tied with 6:30 remaining in regulation when Middlebury’s Sidney Porter scored. The game remained deadlocked at 1 for the rest of the period, forcing the game into overtime, when Dunn turned in the slot and took a quick shot that beat Han low.

By the end of the game, Heiting had saved 27 of 28 shots while Han had saved 22 of 24 Eph shots. “Chloe Heiting stepped up at many key moments to make huge saves,” Gillis said.

“I thought that the team played really well together and weathered some great pressure by the talented Middlebury team,” Gillis said. “I think playing a top-10 team like Middlebury helps us get ready for playoffs next weekend.”

The first-seeded women host eighth-seeded Wesleyan at 3 p.m. on Saturday in the quarterfinal round of the NESCAC Championship.