Men’s basketball advances to NESCAC semis with win over Trinity 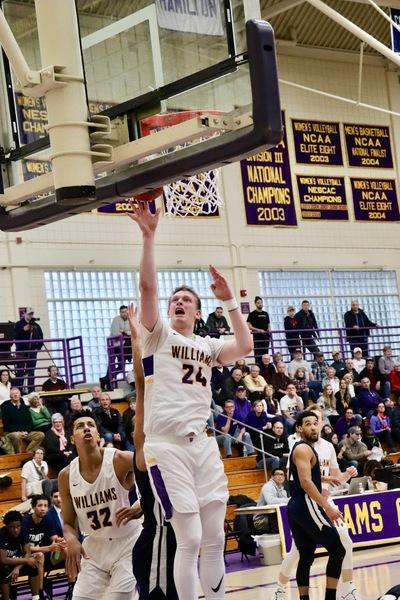 Fourth-seeded men’s basketball (20–5, 6–4 in the NESCAC) prevailed over fifth-seeded Trinity 88-77 in a back-and-forth NESCAC quarterfinal matchup on Saturday. The men advance to play Amherst this weekend in the semifinals, which are hosted by Hamilton.

Coming off a rare three-game losing streak — which included two home losses last weekend – the No. 16 Ephs looked to get off to a fast start. Determined to attack the basket early in the game, they earned several trips to the free throw line on their first two possessions but could only convert one of four attempts. The Bantams then reeled off an 8-0 run over the next minute. Despite their struggles in recent games, the men displayed composure and fought their way back.

“I believe this is the longest losing streak these guys have gone through,” said Eph head coach Kevin App. “And to do it at the end of the regular season is tough. But it was also a great time to wipe the slate clean. I am really proud of our seniors for their leadership and poise. Then to come from down three with five minutes left and rally the troops was just really impressive.”

Although the Ephs would regain the lead at 15-14 with 13:37 remaining in the half, it became increasingly clear that it would be a tight, physical and defensive-minded game.

“Trinity is a really well-coached, great program that has made us a lot better over the past few years,” App said. “Every game against them has been just like this. We knew what to expect and that it wasn’t going to be easy. We knew we would have to buckle down defensively and fight for our opportunities on the offensive end.”

The highlight of the first half was the battle down low between Eph center Karpowicz and Trinity forwards Jorden and Jadakis Brooks. Karpowicz – who led the way with 15 points and 9 rebounds in the half – showed off stellar post moves, helping the Ephs build a six-point halftime lead at 40-34.

As has been the case all season, the Ephs struggled at the free throw line, shooting 7 of 15 in the first frame. Trinity, on the other hand, made all six of their attempts from the charity stripe. On top of the discrepancy in free throw success, the Bantams collected 10 more boards than the Ephs to help keep the deficit within single digits.

The Ephs erupted for a 7-0 run to open the second half. Two layups by Henry Feinberg ’20, sandwiched around a 3-point play from James Heskett ’19, put the Ephs up 13 points with under 17 minutes to play. But right when it looked like the higher-seeded Ephs might pull away, Trinity countered with an 11-4 run to make it a two-possession game.

After Trinity cut their deficit to two, Heskett drilled a 3 from the left side with 11:25 remaining to put the home team up 57- 52. The Ephs, however, could not sustain any momentum. Bantam Francis Uzorh nailed a 3-pointer a couple of minutes later to tie the game at 59. On the following possession, Trinity guard Bell hit a deep 3 before the shot clock expired to give the Bantams their first lead since the first half.

App called a timeout with 8:40 left, and the Ephs tied the game at 62 when play resumed. The game remained a one-possession affair for the next couple minutes as more fans piled into Chandler Gymnasium.

With Trinity leading 66-64, Scadlock collected an offensive rebound and converted on a 3-point play to give the lead back to the Ephs with under five minutes remaining. But as they did all game, the Bantams responded with Bell converting a three-point play of his own. In the spirit of the back-and-forth play, Karpowicz joined in with an and-one on the very next possession. But he missed the free throw, and the game stayed tied at 69 with 4:26 left.

After Casey made one of two free throws, Michael Kempton ’19 drew a charge on the other end to elicit an explosion from the home crowd. Casey connected on a difficult layup out of a timeout to put the Ephs up by three. A few plays later, Karpowicz skillfully fed Heskett on a backdoor cut for an and-one to secure a 77-71 lead for the home team with 1:41 remaining.

Without much margin for error, Trinity’s Christian Porydzy hit a clutch 3 to pull his team back within three points of the lead. Out of a timeout, the Ephs went with the familiar option of having Casey drive to the basket. His layup attempt missed, but Scadlock grabbed the rebound and was fouled with 43.6 seconds left. With the Ephs in the double bonus, Scadlock hit both free throws. A defensive stop on the next play all but sealed the game, and put an end to the Ephs’ losing streak.

“In the playoffs, it’s easy to start worrying about seeds and what happened in the regular season game,” said App. “But at this point, it really doesn’t mean anything. You go out there, you let it rip, and see what happens against some great teams.”

In their third consecutive NESCAC semifinal appearance, the men will play No. 13 Amherst at 4 p.m. on Feb. 23 in Clinton, N.Y. No. 8 Hamilton, the second seed, takes on eighth-.seeded Tufts in the other semifinal. The winners will compete on Sunday for the conference title and an automatic bid to the NCAA tournament.