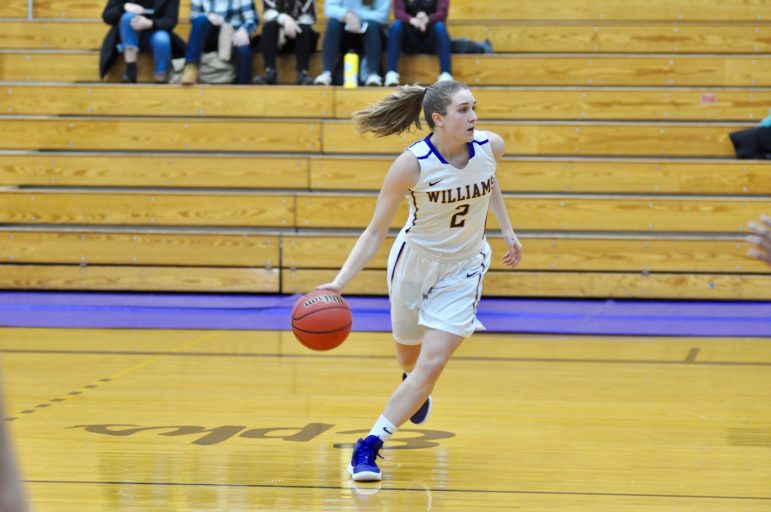 In her four years on the team, tri-captain Lexi Jones ’19 has scored 248 points and played in 91 games. Photo courtesy of Sports Information.

Women’s basketball (11–14, 5–5 in the NESCAC) was defeated by No. 6 Tufts 75-51 on Saturday in a NESCAC quarterfinal. This was the last game of the season for the women, who entered the tournament in the conference’s sixth seed while Tufts was seeded third.

“Tufts is one of the best teams in the country, and they were on fire to start the game,” Williams head coach Pat Manning said. “We played well in spurts, but two things that hurt us were turnovers and offensive rebounds. It would seem like we would play really good defense, but then they’d take the shot and get the rebound.”

Mikaela Topper ’21 and Maggie Meehan ’21 were the two leading scorers, with 22 points and 20 points, respectively.

“They both were able to create in the open floor some fantastic one-on-one moves,” Manning commented. “[It was] a very impressive performance by both of those kids.”

Tri-captain Lauren Vostal ’19 led in rebounds with 8 while Gabby Martin ’21 was a force in the paint with her defense and rebounding. Jumbo guard Jac Knapp racked up 19 points and was the overall top scorer for her team, while Cailin Harrington led her team with seven rebounds.

The Jumbos looked to push the tempo early on and found themselves easily firing on all cylinders, finding many of their points through 3-point shots early in the first quarter. The Eph defense weathered the weight of the Jumbos as Knapp put up 7 points for Tufts in under two minutes. Topper evened the score with a 3-pointer to tie it up at 7-7, but two 3-pointers from Tufts quickly followed to strengthen the Jumbo lead. Knapp made it into double digits with another 3-pointer with less than 20 seconds left to give Tufts a 31-14 lead at the end of the first.

Meehan and Topper in combination cut down the deficit to 12 almost immediately, taking advantage of holes in Tufts’ defense and causing Jumbos head coach Carla Berube to call a timeout. The Ephs initially outscored the Jumbos and forced a few turnovers, but Tufts’ defense continued determinedly forward. After a three-minute break from scoring, Emily Briggs made a layup for the Jumbos and put her team back on track for the quarter. The women did not score for the rest of the period, and Tufts increased its lead to 42-23 at the end of the first half.

A full-court press from the Jumbos brought another resurgence in scoring, taking advantage of the Ephs’ troubles with ball security. Meehan responded by pushing the tempo for the Ephs and trying to regain some momentum. Even with the Ephs working the ball in and out of the paint, the Jumbos stormed ahead, racking up another 20 points for the quarter.

In the face of an almost 30-point deficit, the Ephs gave it their all in the last period, going on to outscore the Jumbos for the first time in the game. A deep 3 from Topper made it 62-38; she would go on to score another six points on top of that. The Ephs ran the court to put up 17 points from three players. The final score, however, saw Tufts on top 75-51.

Regarding the upcoming offseason, Manning remarked, “Every season you have to add something to your game and you can’t be content with what you did. Adding something offensively to your game, like another shot or move, something like that makes you a more versatile player.”

For Vostal, Lexi Jones ’19 and Caroline Lovisolo ’19, Saturday’s game was the final time playing for the Ephs. As tri-captains, they led the Ephs through 25 games this season, going 5–5 in conference, and pulled off an upset over Trinity. Throughout their four years, they have collectively scored 728 points and seen over 50 hours of game time.