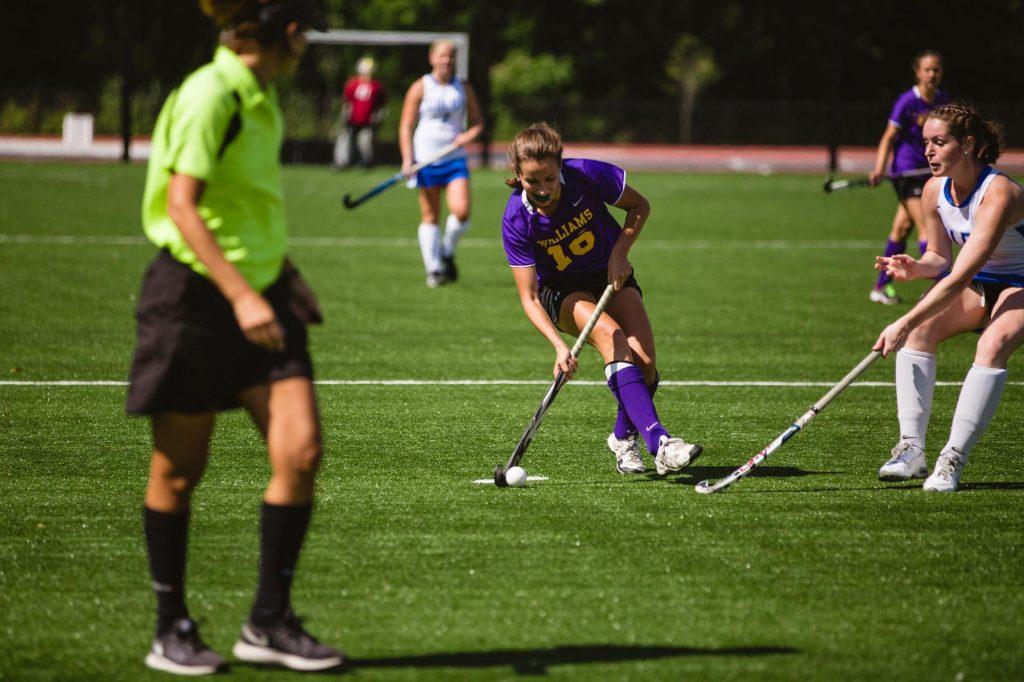 On Sunday, the Ephs pushed past the Bobcats with two second half goals by Isabel Perry ’20 and Emma Ticknor ’20. The match got off to an action-packed start for the Eph defense as keeper Emma Santucci ’19 defended two shots from Bobcat Emma Patterson and Grace Fitzgerald within the first six minutes. Bobcat senior Taylor Lough, however, took a ball off Fitzgerald’s stick for a 5:53 goal, giving the Bobcats an early 1-0 lead.

The Ephs offense pushed back with four penalty corners and three hard shots before Meredith Wright ’19 found the back of the goal at 12:41. The shot was assisted by Perry and Ticknor, tying the game at 1-1.

The pressure shifted back and forth over the rest of the period. Taking the lead, the Ephs added a goal by Libby Dolan ’19 at 17:01. However, the Bobcats did not back down and finally found a gap in the Eph defense to push a late goal by Bobcat forward Bridget Thompson who was  assisted by Riley Burns and Emma Patterson at 31:22. The Ephs and Bobcats remained at a 2-2 stalemate heading into the half.

At the half, Santucci had four saves and was replaced by Abby Lloyd ’20 for the second.

The energy of the first half was not lacking at the beginning of the second half, as Bates notched two quick shots by Fitzgerald and Lough in the first three minutes. Both were saved by Lloyd. The contest kept the pressure on, with both teams totaling 13 penalty corners in the half. But a 57:42 penalty corner by Kate Gregory ’22 ended in a nice shot by Perry for a 58:18 goal, pushing the Ephs ahead 3-2.

The Ephs took the defensive advantage, keeping the Bobcats at bay and fronting strong offensively. Ticknor sealed the Eph lead with a 64:36 goal assisted by Wright to bring the Ephs to 4-2 with six minutes left in the match.

The Bobcats had a chance to retaliate in the final minutes of the game with a late penalty corner at 69:14. A Bobcat goal into the corner was nullified for a foul due to “dangerous play,” ending the match at 4-2.

The Ephs totaled an impressive 17 penalty corners in the game. “We really capitalized on those [penalty corners], and we did a great job stepping up to the ball,” head coach Alix Barrale ’93 said. “We bounced back hard and defensively we were able to stay composed when Bates pushed the pace of the game up… Gregory also really stepped up for us today and was a solid part of our defense. It was a battle from start to finish, and I’m glad we didn’t have to sit with our loss for too long.”

On Saturday, the Ephs had a good start but ultimately fell to the Mammoths 4-3.

On the Ephs’ fourth penalty corner, the Mammoths fouled and gave the Ephs a penalty shot. Wright stepped up and slipped one over the glove of Amherst goalie Katie Savage for the first goal of the game at 25:01. Five minutes later, Siobhan Morrissey ’22 scored her first collegiate goal to double the Ephs’ score to 2-0.

The Mammoths picked up the pressure and cut the Ephs’ lead in half after Franny Daniels connected with teammate Natalie Hobbs at 33:48, making the score 2-1.

The Ephs led 2-1 going into the half. Lloyd took over in goal in the second half of the game for Williams. Santucci ended the first half with three saves. Lloyd would finish the day with eight saves.

At the beginning of the second half, the Mammoths kept the pressure on the Ephs with several near shots on goal. At 46:58, the Mammoths tied the score off of Kendall Casey’s shot from the top of the scoring circle.

On the Mammoths’ eighth penalty corner of the game, Casey put the Mammoths on top 3-2 with an assist coming from Shannon Tierney. The Mammoths had another opportunity at 61:20, but a kick save by Lloyd cleared the danger for the Ephs.

The Ephs pushed the offensive tempo and put some defensive pressure on the Mammoth goalie with shots from Wright at 63:38 and Emma London ’22 at 63:28. However, the Mammoths were able to keep the ball from entering the net. At 66:01, the Ephs called a timeout to regroup.

Out of the timeout, Perry connected with Wright, who put the Ephs level with her second goal of the game, bringing the score to 3-3. The Mammoths answered back two minutes later with a goal from Schwartzman with the assist coming from Tierney.

The Mammoths held onto their 4-3 lead, ultimately winning the game.

“It’s funny because we scored three goals, which is a good offensive game, but we lost the lead, and I think Amherst deserves the credit,” Barrale said. “They beat us to a lot of balls and finished well. We were playing a little bit hectic, weren’t making our regular passes, and they finished well and had some beautiful shots. However, we hung in there and made it exciting, but it wasn’t our best showing.”

The women will play Springfield today at 6 p.m. at Williamson Field.