WPD use of force policy falls behind advocates’ benchmarks, six reported uses of force in past two years 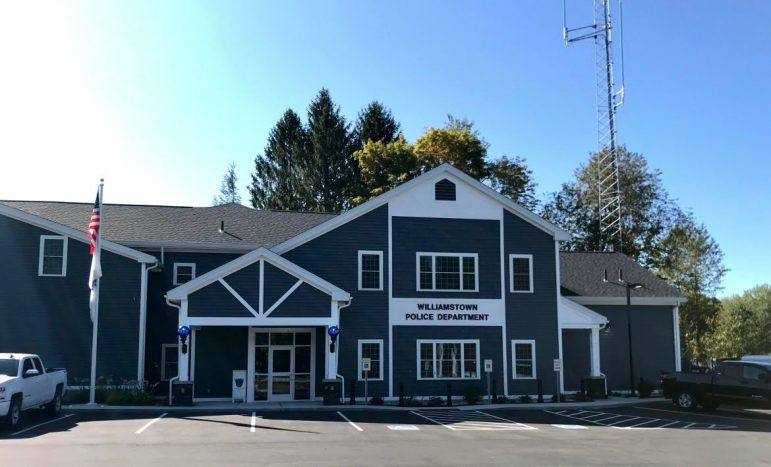 The Williamstown Police Department’s (WPD) use of force policy does not require the use of de-escalation tactics before force is used.

It does not establish a duty to intervene when officers witness excessive uses of force.

It does not mention or restrict the use of choke-holds.

And it does not require officers to exhaust all other reasonable means before use of deadly force.

These are all reforms that anti-police violence advocacy groups like the Use of Force Project and activists nationwide have broadly called for.

Johnson confirmed that the WPD has no policies pertaining to the use of “neck restraints” or “officer intervention,” but said that they will be included in the forthcoming revised use of force policy. Though Johnson said de-escalation tactics are “taught at the recruit level and then reviewed annually through in-service training”, their use is not required by the WPD.

Williamstown Town Manager Jason Hoch ’95 dismissed shortcomings in the current policy, emphasizing the forthcoming revised policy instead and what he sees as the relative infrequency of uses of force by the WPD.

“You know what, I don’t care how deficient our current policy is — We know that. That’s why we’re rewriting it,” Hoch said. “The operation we have has focused on de-escalation over time. I think there are any number of policies that we haven’t always caught the written document up to current practice.”

“There are places where again, up until a month ago, for better or worse, a specific sentence prohibiting the use of chokeholds was not on anybody’s particular radar screen,” Hoch added. “Now, it’s something that everybody will want to look in and see in a policy. So that’s part of the evolution of it all.”

Meg Bossong ’05, a Pittsfield resident and local advocate for police abolition, emphasized that, to her, use of force policy reforms are a floor, and not a ceiling.

“At a minimum, we need to be reviewing them often enough to make sure that the community, either directly or through its electeds, has the chance to weigh in — as new weapons are marketed to departments — on what kinds of weapons they consider acceptable to use against their neighbors,” Bossong said.

The WPD’s current use of force policy states that sworn officers should “use only the force that is reasonably necessary to accomplish lawful objectives” and outlines a five level continuum of force, with corresponding permissible responses to five “perceived circumstances.”

The current policy allows for use of deadly force “to protect the officer or others from what is reasonably believed to be a threat of death or serious bodily injury.”

It also allows for use of deadly force to make an arrest if: the arrest is for a felony; the officer reasonably believes the force does not put innocent persons at risk; and the officer reasonably believes that the alleged crime involved conduct including the use of force or that there is a “substantial risk that the person to be arrested will cause death or serious bodily harm if such person’s apprehension is delayed.”

The policy has two explicitly enumerated restrictions to use of deadly force: Both warning shots and shooting at moving vehicles that are not an imminent threat are disallowed. However, it does not require that officers exhaust all other alternative means before use of deadly force. The Boston Police Department’s (BPD) use of force policy, in comparison, has language requiring that “there is no less drastic means available” before officers discharge a firearm, although advocates have pointed to the BPD’s continued acquisition of military equipment, even as the department reforms its use of force policies.

In an interview with the Record, Williamstown Town Manager Jason Hoch ’95 said that Johnson, the Williamstown police chief, recognized a need to update the policy in the wake of the killing of George Floyd by Minneapolis police officer Derek Chauvin while in custody.

“In the first days after the Floyd incident, [Johnson and I] said, ‘Hey, where are we on our own policy? We haven’t looked at it in a while,’” Hoch said. “And then quite honestly, the chief was already ahead of me. He said, ‘Yep, I’m there. I started looking at the draft policy now.’”

According to Johnson, the process of revising the use of force policy is being conducted internally by the WPD. He said it will involve himself, Lieutenant Michael Ziemba, Sergeant David Lemieux, who is a firearms and taser instructor, and officer Brad Sacco, who is a firearms instructor. “We obtain our policies from the MCOPA (Massachusetts Chiefs of Police Association), and then adjust them as applicable to fit our department,” Johnson said.

At Wednesday’s Williamstown Select Board meeting, members of the board discussed a plan “responding to racial concerns” raised by residents. The plan includes the internal “review of state and national standards currently being used in the local Police operations,” which has already been initiated.

At the July 1 meeting, Selectperson Jeffrey Thomas proposed that the review involve an external consultant or a neutral third party. Hoch demurred, raising concerns about what he sees as the practical challenges of an external audit, and his belief that a third party would not be necessary for a review of what he said is “core data.”

“I think there’s less discretion in some way there,” Hoch said.

Thomas also recognized his expectation that any review would not reveal significant shortcomings. “I have a bias going into this, which is that I have a feeling we’re going to end up learning that our police department is above average, and maybe in a lot of dimensions,” Thomas said.

Selectperson Hugh Daley echoed Thomas’ confidence in the WPD’s current practices. “It’s those macro level questions, like, is the size of our police department the size that we want? And you know, from my perspective, I think it is that 24/7 policing works. It seems to be where we want it to be,” Daley said. “But I think we got to start at the 30,000 foot level, all the way down to the — okay, now you’re at a traffic stop. And what are you doing?”

In an interview with the Record, Bossong said in order for use of force policies to be effective, they also require the implementation of external mechanisms for accountability.

“A community might spend a ton of time writing an airtight use of force policy, but how does that help a person who has been killed or wounded by prohibited force if the officer is given 2-3 days before making a report, gets a chance to review all the body camera footage before make a report, or if their firing by a chief or review board is subject to being overturned in arbitration?” Bossong said.

Leticia S. E. Haynes, Vice President for Institutional Diversity, Equity and Inclusion at the College, spoke with the Record about use of force policy nationwide.

“I just think that it’s always been critical that law enforcement at all levels really consider the impact of their practices,” Haynes said. “Not just in their particular town or county. This is especially important in light of what continues to happen nationally, in particular, how some people are discriminated against and over policed, which oftentime results in injury and or death. And that has particularly been true for Black and Brown people.”

Six reported uses of force in the past two years

Of the six reported uses of force which took place between January 2018 and June 2020, five included the use of a taser. Of those five uses, the taser was fired in two cases and drawn but not fired in three other cases. The remaining use of force report indicated the use of a firearm, where the firearm was drawn but not discharged.

One report describes a March 2020 incident, where an officer fired a taser at someone they were attempting to arrest. The report, written by the officer who used force, said that the ‘subject’ “at one point held a knife and a barbell over his head” in a way that the reporting officer described as threatening.

“[The] subject also took his shirt off and took a fighting stance telling officers to engage him,” the report said. The officer fired a taser at this person, according to the report.

The WPD’s current use of force policy only allows “electrical weapon deployment,” or the use of a taser, when the officer perceives that the subject is “assaultive.” “Assaultive” is defined within the policy as “an actual attack on the officer or others,” with a reasonable expectation of bodily harm, serious bodily harm or death.

According to the March 2020 report, the person on whom the taser was fired complained of injuries, and treatment was sought. The subject was “transferred to the ER,” the report said.

Anti-police violence advocates have called for careful reevaluation of force continuums, like that used by the WPD in determining the use of tasers.

“The challenge with use of force policies is that any and all of them always have the caveat that lethal force is justifiable if a reasonable officer feared for their life, which is why we see that used as the defense in nearly every case that’s come to public light,” Bossong said. “As communities, we often end up then engaged in a side conversation about who does and doesn’t value officer safety. I think that can then become a diversion from larger conversations like, in what circumstances are we comfortable allowing the extrajudicial killing — or strangulation, or electrocution, or chemical exposure — of our neighbors?”

In a Dec. 2018 incident, an officer fired a taser at someone they were attempting to arrest, according to a use of force report. The report, written by the officer who used force, said that the subject had no weapon, but acted “aggressively.”

In the Dec. 2018 instance of use of force, the taser was deployed for 5 seconds, according to the report. The “injuries” section of the use of force report was not completed, except for a description of injuries that read “none.”

At the time of publication, the Record has not yet obtained the WPD’s policy on how and when uses of force are reported, so it is unclear whether all uses of force, such as the use of what the written policy calls “pain compliance techniques,” automatically trigger a formal report that is accessible as a public record.

Anti-police violence organizers nationwide are also calling for reforms broader than changes in use of force policy, which some say are not sufficient to address the root cause of police violence. Cities across the country are discussing defunding or dismantling police departments in response to these calls.

In Williamstown, residents, including Tashi Rai, who spoke on behalf of the Williamstown Youth Abolition Coalition at Wednesday’s Select Board meeting, have asked Hoch and the Select Board to halt a $50,000 increase to the WPD’s current budget. Some students at the College have also criticized the College’s choice to fund a new Williamstown police station with a $400,000 donation in 2018.

“This moment calls for you all to recognize the urgent need to reevaluate police presence in this town,” Rai said.

As further public records are obtained by the Record, this article will be updated.