The Williams Record • May 29, 2020 • https://williamsrecord.com/307737/news/faculty-passes-motion-to-reduce-graduation-requirements-administration-announces-no-division-of-the-day-next-year/

Faculty passes motion to reduce graduation requirements, administration announces no Division of the Day next year 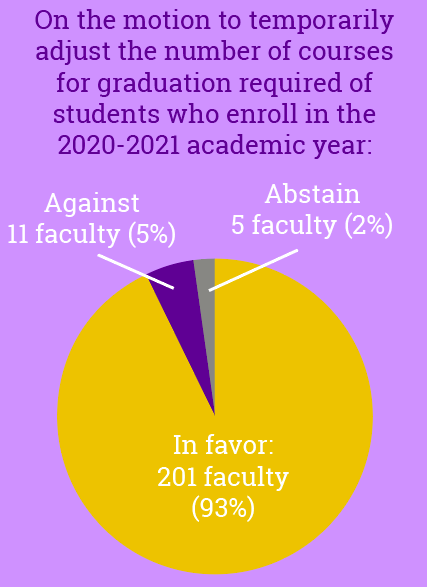 At an extraordinary faculty meeting Wednesday, faculty overwhelmingly approved a motion put forward by the Committee on Educational Affairs (CEA) to temporarily adjust graduation requirements, allowing students who are enrolled next year to graduate with a minimum of 30 courses and three Winter Study credits.

This decision, which only applies to students enrolled in the 2020-21 academic year, comes after President Maud S. Mandel announced last week the reduction of required courses from four to a minimum of three next year and the cancellation of Winter Study — otherwise known as the 3-0-3 decision — regardless of whether classes are in-person or online. In last week’s all-community email, Mandel had announced that the faculty would soon be voting on amending graduation requirements.

The motion ultimately passed with 93 percent of faculty voting in favor, 5 percent against and 2 percent abstaining.

The administration also announced at the meeting the removal of “Division of the Day” next year. Division of the Day is the College’s typical scheduling policy in which no classes take place between 4 p.m. to 7 p.m., leaving those hours for extracurricular activities and athletic practices. Without this policy in place, classes could presumably be more spread out throughout the day, allowing for smaller class sizes and more dispersed dining hours.

In its justification for temporarily modifying course requirements for graduation, the CEA noted in a memo to the faculty that “the load of four Williams courses a semester is unsuitably and demoralizingly high for remote learning conditions.” Given that the following school year will be “at best a hybrid year that combines in-person and remote instruction,” the motion seeks to ease the academic burden on students while still allowing them to graduate on time.

Following the College’s decision to implement a 3-0-3 two-semester model for the 2020-21 academic year, the CEA unanimously proposed the motion to change graduation requirements accordingly for all students enrolled during the upcoming academic year. Students enrolled in a single semester would be allowed to graduate with the satisfactory completion of 31 regular courses, while students enrolled in both semesters can graduate with the satisfactory completion of 30 regular courses. Any students enrolled at all next year will only be required to complete three Winter Study courses. Students will still be expected to complete distribution requirements, while individual departments are currently assessing what implications the new measures may have for major requirements.

Under this motion, students taking three courses per semester in the 2020-2021 academic year will be considered full-time students. Students intending to take more than three courses a semester can still do so through the same process by which they would add extra-graded fifth courses in a normal semester. These changes will go into effect regardless of whether courses for the year take place in person, remotely or some combination of the two.

“We have learned this spring that taking four Williams courses remotely is a much heavier burden than taking four courses in person, for a variety of reasons,” explained CEA Chair and Professor of Philosophy Bojana Mladenović. “Since every student’s academic experience next year may include an online component, the minimal number of courses for full-time status was reduced to three.”

Faculty reactions to the vote

Prior to a vote on the motion, some faculty members expressed reservations about its necessity. Chair and Associate Professor of Theatre David Gürçay-Morris ’96 said that while he understood the reasoning behind the reduction to three required courses for next year, he questioned the necessity of reducing the ultimate course requirements for graduation so quickly.

“We had a lot of language about compassion and thinking of the students who are most negatively affected by all this, as if the 30-course solution were the only compassionate solution,” he said. “I found that disingenuous.”

Ultimately, he voted against the motion. “I understand the use of modest emergency powers to enact the change to a 3-0-3 course load in a swift manner, but I disagree that the larger, four-year solution to credits towards graduation needed to be solved in the same compact timeframe,” he said.

Meanwhile, Associate Professor of Philosophy Keith McPartland questioned the decision to allow students to take only three courses per semester in the first place, since that change was made without a full faculty vote. He subsequently raised a motion to indefinitely table the CEA’s motion, citing a breach of Robert’s Rules of Order. Professor of Mathematics Steven Miller and Assistant Professor of Mathematics Leo Goldmakher both seconded McPartland’s motion, allowing it to go to a vote. Eleven percent of faculty (25 faculty) voted in favor of the motion to table the original motion, 81 percent (179) voted against it and 8 percent (17) abstained.

Professor of Economics William Gentry said he voted in favor of lowering graduation requirements, a measure he described as “surgical” in that it “need not impact students who have the ability to complete four courses.”

“This is not about mandating students that they take three classes –– this is about creating flexibility,” he said. “Options and flexibility are very valuable when there’s uncertainty… This is a compassionate way of dealing with a lot of the anxiety.”

In response to faculty questioning the 3-0-3 model or the way in which it was implemented, Gentry said that faculty could’ve expressed that opinion by voting against the broader motion to change graduation requirements.

“I took it as a combination vote,” Gentry said. “We were only voting on the graduation requirement part, but a predicate of that was the 3-0-3, and so to me, it was all jumbled together. If you really hated the 3-0-3, then just vote against the proposal. They’re not separable.”

Chair and Professor of English Katie Kent also voted in favor of the motion, saying that the motion would address inequities students may face during the 2020-21 academic year.

I supported the measure,” she wrote in an email to the Record. “In the case that we are doing only remote instruction for the fall term, it seems clear that juggling four different courses is far from ideal for many students, and, in particular, might exacerbate existing inequities amongst our community or not allow for exigencies such as someone in one’s family falling ill, or falling ill one’s self. It would not be fair to tax every student who opted to take three courses during the upcoming year with deficiencies to be made up before graduation, either. And as I understand it, students who wish to can choose to take four classes. After this year, I assume and expect that things will go back to normal: four classes per term and a Winter Study.”

Gentry said he believes that this measure will not leave a significant impact on students’ ability to finish major and distributional requirements.

Still, Gentry said, “I would advise students that if you think you can take four classes, sign up for four classes, and if you need to drop down, we can drop down.”

Removal of Division of the Day

Regarding Division of the Day, which was not voted on but rather announced at the start of the meeting, the College said the schedule change would help the College maintain classroom settings that meet recommended public health practices, should campus return for in-person learning in the fall.

“In addition to proper ventilation, protective equipment such as masks and gloves, and social distancing of at least 6 ft. between people, there is the requirement that the time between classes must be 30-40 minutes, for cleaning, ventilation, and air particles to settle,” explained Mladenović in an email to the Record. “It is likely that, without the Division of the Day, all classes could fit the five working days without spilling into the weekend.”

If courses resume on campus, and if athletic teams are able to practice, coaches will have to schedule practices around students’ schedules. “It may mean more smaller group sessions, or team members may have to workout on their own on certain days,” Director of Athletics Lisa Melendy said. “As is currently true, some athletes will miss practice due to an academic conflict.”

In addition to affecting students, Melendy mentioned the impact this change could have on faculty and staff if athletics take place. “This will of course need to be managed in such a way that allows support staff, in particular equipment managers and athletic trainers, to appropriately do their work,” she said. “This will certainly require more of coaches who may greatly increase the number of hours they spend coaching in order to support students in their training. This could likely be the same of support staff.”