Four Years through the Headlines: Capturing the Class of 2020’s experience 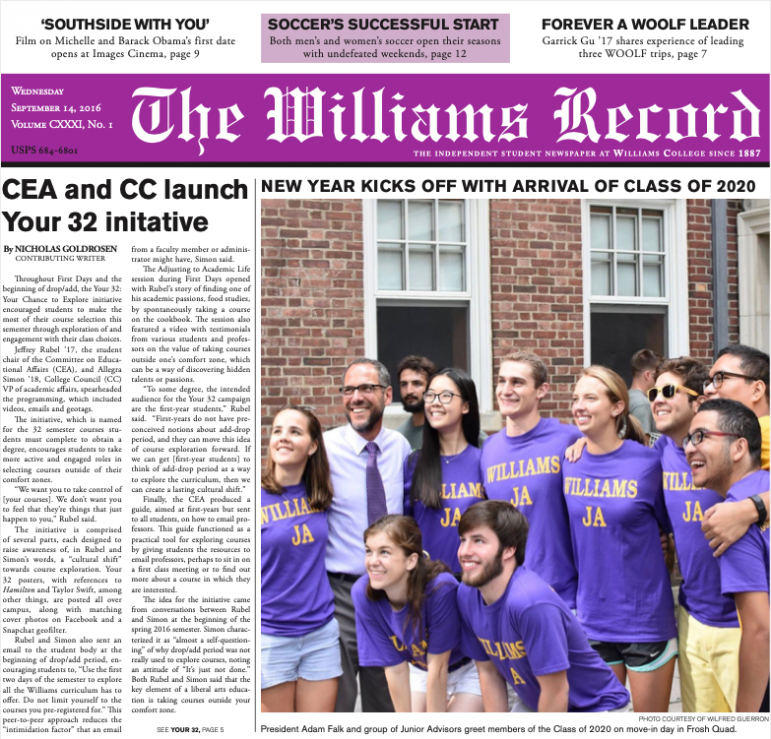 Members of the Class of 2020 have seen two United States presidents, three College presidents and two different forms of student government during their four years at the College. They’ve celebrated two homecoming wins, danced to Shaggy live at Spring Fling and witnessed Papa Smurf win a write-in nomination for College Council (CC) — which later got abolished. They’ve seen the fall of Vine and the rise of TikTok. And most recently, they’ve become the first class to complete their Williams education remotely amidst a pandemic.

In our senior issue celebrating the members of the Class of 2020, we went through the Record archives from the past four years to capture their time at the College through the headlines.

By far the most newsworthy event during the fall of 2016 was the election of U.S. President Donald J. Trump. In the days following, students occupied Baxter Hall with an open-mic session to express their thoughts, unsuccessfully petitioned then-President Adam Falk to cancel classes and held a rally at the roundabout between Routes 2 and 7. Two students vandalized Griffin Hall with fake blood “to bring attention to the effects of the presidential election on many within our community,” Falk said in an email to students.

Trump’s election sparked a wave of activism on campus. Towards the end of November, students walked out of classes and marched from Paresky to occupy Hopkins Hall, calling on Falk and circulating petitions to declare the College a sanctuary campus. Students held signs with slogans including “Brown, queer and illegal” and “We refuse to hate,” and chanted lines such as “No borders, no nations, stop deportations.” Another chant called for “Less slabs, more therapists,” reflecting a College-centric controversy at the time surrounding the then-new marble slabs on Sawyer Quad and student frustrations towards Psychological Counseling Services (now Integrative Wellbeing Services). CC passed a resolution at the end of November supporting undocumented students. In January, around 60 students traveled to Boston with the Davis Center to attend one of the scores of Women’s Marches taking place across the globe.

On campus, Horn Hall opened, and with it, a wave of student activism against Joey Horn, the trustee for whom the building was named. Horn and her husband were convicted in Norway for violating immigration and criminal law by lying to immigration authorities about the employment of two Filipino au pairs. Students unofficially renamed Horn Hall “’69 & ’93 Hall” in protest. This movement also intersected with unsuccessful protests against the trustees advocating for the College to divest from fossil fuels.

Students also packed Paresky auditorium in March to advocate against CC’s censure of Cap & Bells for a party at which students were transported. The group ultimately received a warning instead of a censure.

Near the end of the academic year, the Junior Advisor Advisory Board (JAAB) announced the end of a previous requirement that Junior Advisor co-pairings be male-female. Accordingly, this was the first year the JA Selection Committee did not admit an equal number of male and female JAs for the Class of 2021. Meanwhile, faculty elected to eliminate the “high pass” option for Winter Study grading, and replaced the Exploring Diversity Initiative curricular requirement with the Difference, Power and Equity requirement.

And, let’s not forget the range of other newsworthy events that happened during the Class of 2020’s first year: Sushi Thai changed its name to Blue Mango, Vine shut down, Purple Dragon Games opened, and Shaggy performed at Spring Fling. 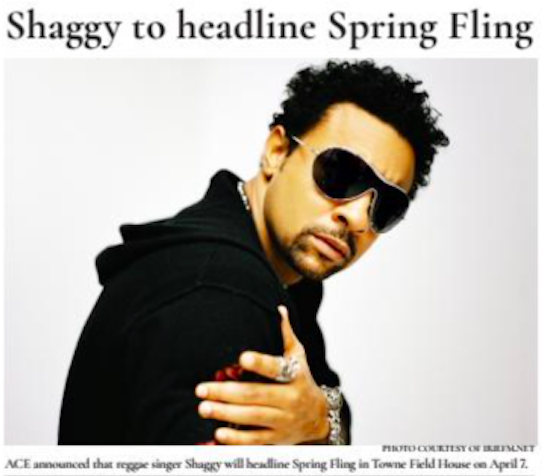 The Class of 2020’s sophomore year kicked off with Falk’s announcement at the end of the summer that he was leaving the College for the Alfred P. Sloan Foundation after seven years as president. Falk concluded his time as president at the end of the fall semester, after which Professor of Physics Tiku Majumder served as interim president during the spring semester while the search committee began its work. 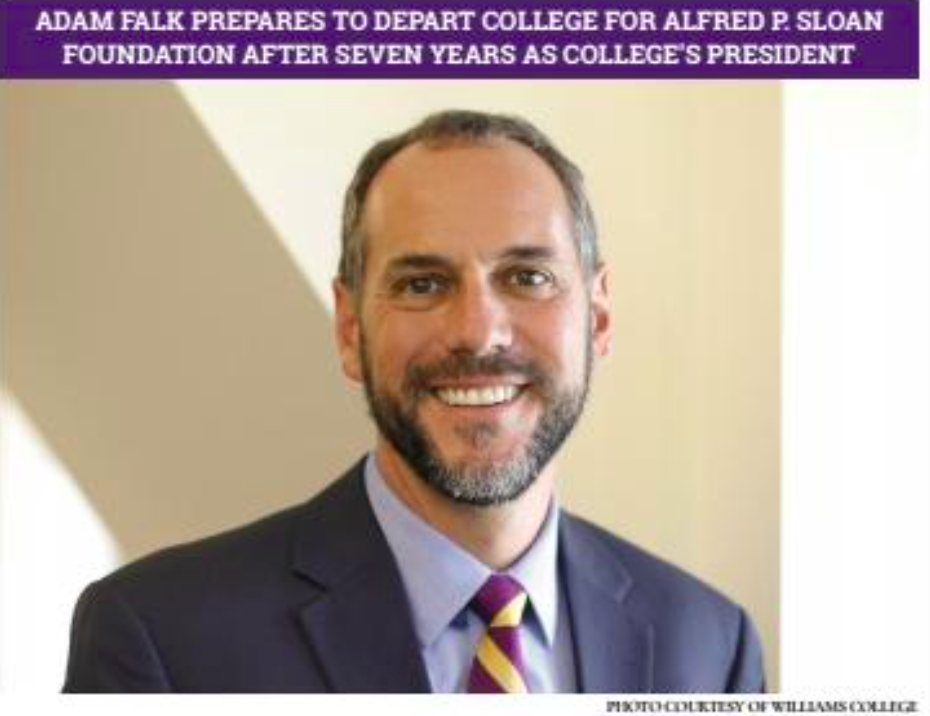 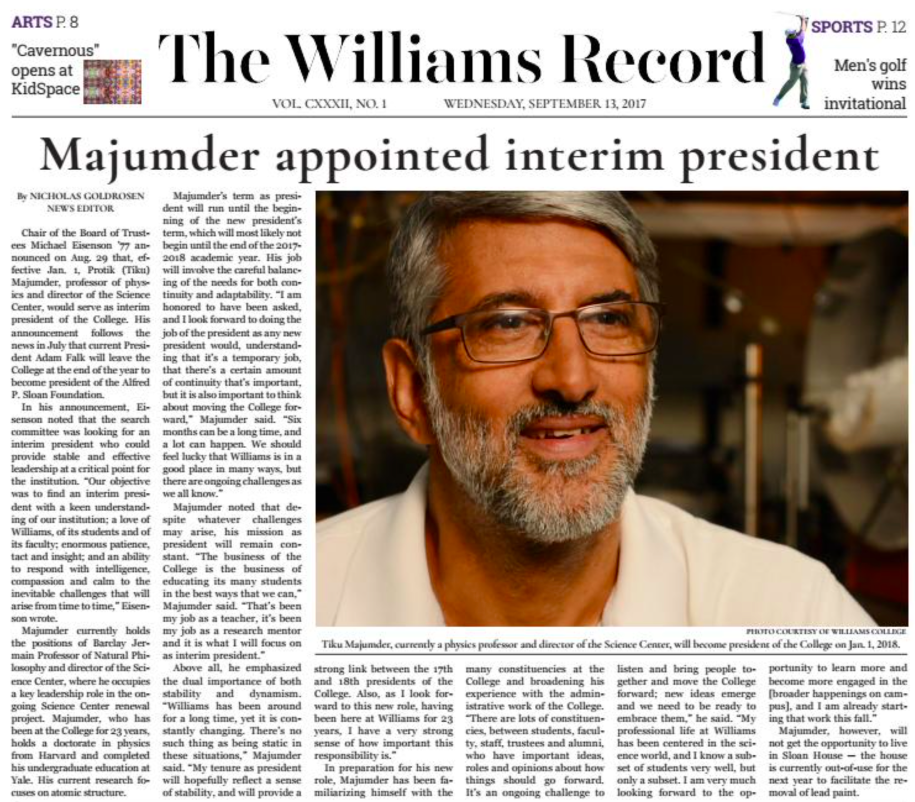 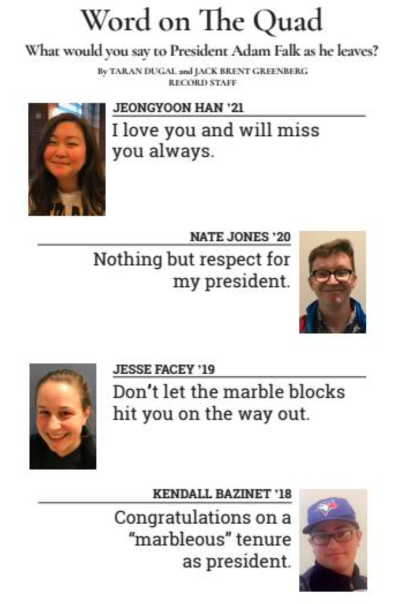 In September, the Trump administration announced its repeal of the Deferred Action for Childhood Arrivals program (DACA), sparking a protest on the roundabout between Routes 2 and 7. On Mountain Day, Gospel Choir protested the U.S. national anthem in its singing of “The Star Spangled Banner,” taking a knee alongside many protesting throughout the country. The Muslim Student Union, Minority Coalition, Coalition for Immigrant Student Advancement and International club also hosted a two-day event to protest Trump’s travel ban. Meanwhile, both Bryan Stevenson and Laverne Cox packed Chapin Hall, delivering inspirational talks on their work as part of Williams Reads and the 25th anniversary celebration of the The Michael Dively ’61 Lecture Fund for Human Sexuality and Diversity, respectively. 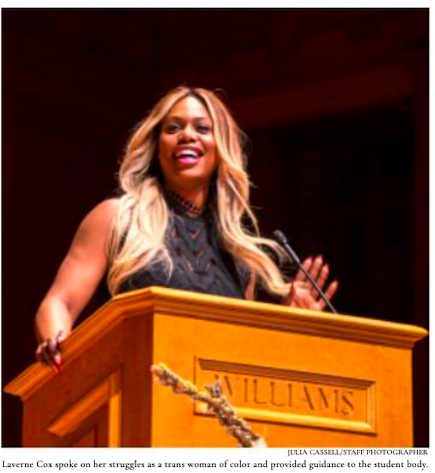 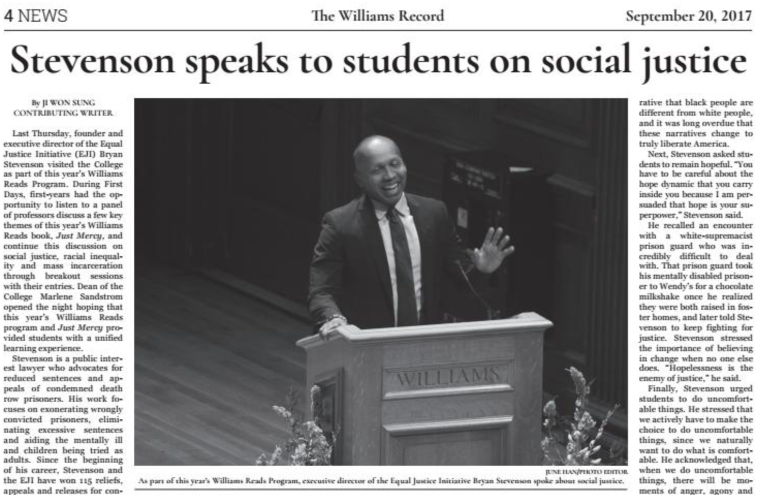 Also that fall, the first-years on the football team received unique haircuts following the team’s overtime homecoming win against Amherst, its first since 2010.

In the spring, a low number of JA applications prompted JAAB to reconfigure the entry system, increasing the size of entries from approximately 20 first-years to groups of 30 to 40, and allowing for JA co-groups of three or four as opposed to the traditional pairs. During Previews for the class of 2022, members of the student movement advocating for an Asian American studies program at the College protested at the Jamboree, criticizing the College and reigniting the movement for Asian American Studies on campus. 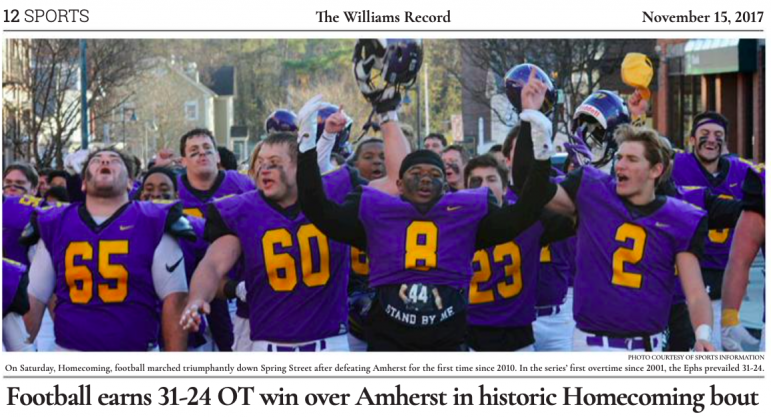 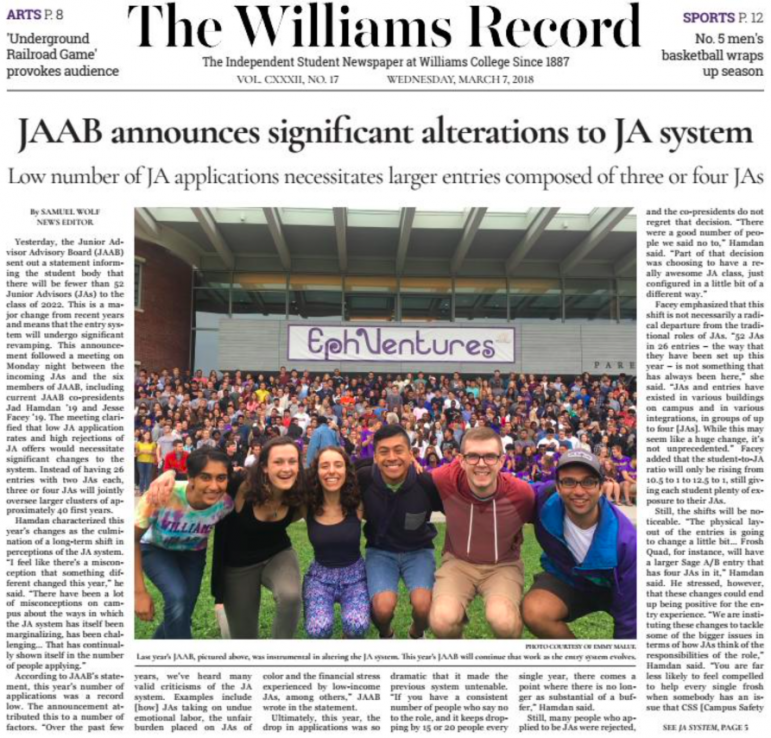 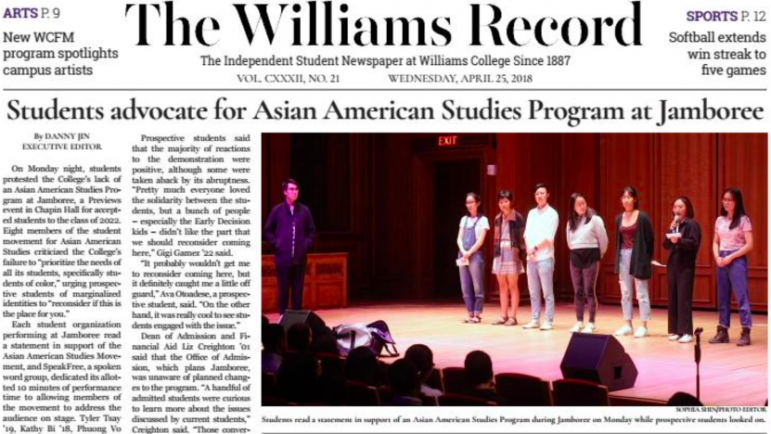 In other College news, Psychological Counseling Services changed its name to IWS, Goodrich opened in Dodd as “Doddrich” amid Goodrich renovations, and the new bookstore opened on Spring St. “Students lose opportunity to complain about walk to Water Street,” the Record wrote on the Bookstore. Yet, while Spring St. gained the bookstore, it lost Subway.

The spring semester also brought the announcement of the next College president, Maud S. Mandel, who visited campus from Brown for the first time in April. 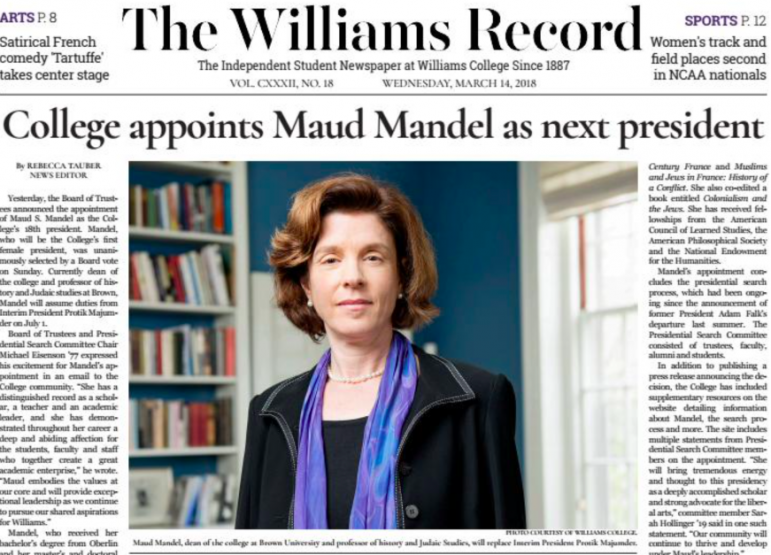 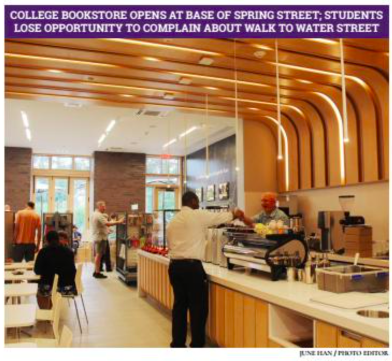 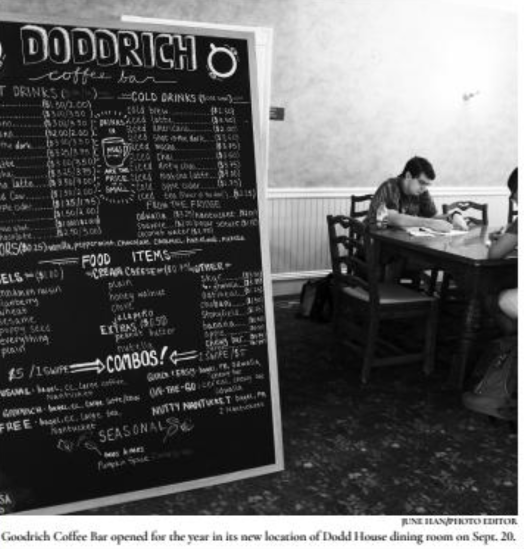 The year started off with a new president at the College, Maud S. Mandel, former dean of the college and professor of history and Judaic studies at Brown, and the first woman to lead Williams. Meanwhile, campus was adjusting to new changes: Goodrich reopened, marking the end of the Doddrich era. It was also a year of experimentation under a new JA system, in which the number of first-years per entry nearly doubled and JAs worked in groups of three and four, as opposed to in pairs. 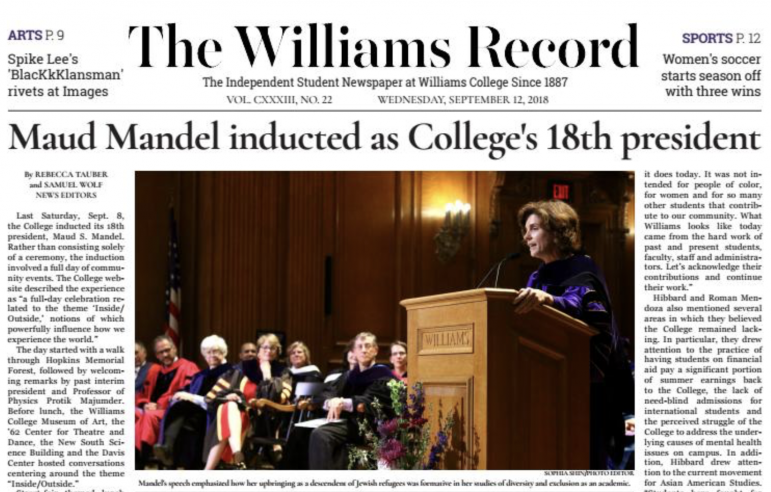 Developments within the U.S. found its way into campus discussions, from a Democratic comeback in the 2018 midterm elections, to debates over the Chicago Principles on free speech. Students discussed the merits of affinity housing. The cancellation of Beast Thing shed new light on the theater department’s treatment of student actors and its handling of issues related to race.

The spring semester marked these four years’ most eventful period in campus politics and activism. The leaves of assistant professors Love and Green sparked protests against the College regarding the treatment of faculty and staff of color, demonstrations that intensified as memorials commemorating the professors grew and then were taken down — a move which students criticized, protesting a lack of transparency and empathy. The Committee on Educational Affairs (CEA) approved the hiring of both a senior scholar and tenure-track professor in Asian American studies — a huge win for the Asian American studies movement and a first step towards the establishment of an Asian American studies program at the College. The College celebrated 50 years of Africana studies, and students organized programming for prospective Black-identifying students, known as “Black Previews.” CC came under further scrutiny for its handling of Black Previews’s funding application and as the College found out that $225,000 of CC funding throughout the past few years had not been distributed. And the student group Coalition Against Racist Education Now released a statement to Mandel, listing “12 objectives that its members believe would resolve what they perceive to be contradictions between the College’s practices and stated mission.”

The last two weeks of the semester were filled with student organizing over CC’s rejection of the Williams Initiative for Israel’s request to become a registered student organization and an alleged bias incident committed by the chair of the English department toward a faculty member of color, placing the English department under further scrutiny.

The fall saw new curricular and campus developments, with the hiring process for positions in Asian American studies making headway and the new Williams Inn opening that summer.

Still, the memories of fraught student governance and student activism calling for racial equity were at the forefront of students’ minds as the year began. A call to boycott the English department was released after a professor used the N-word in a class, reigniting student activism from the previous semester. And in February, CC was replaced with a new student government system: the Three Pillars. 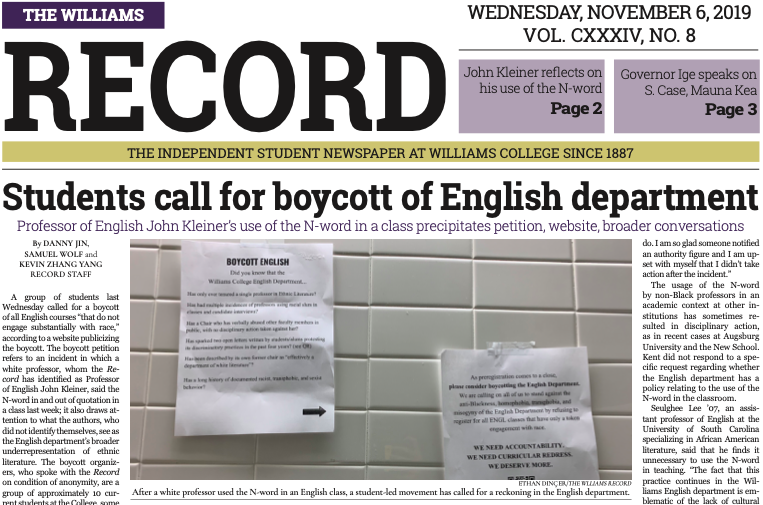 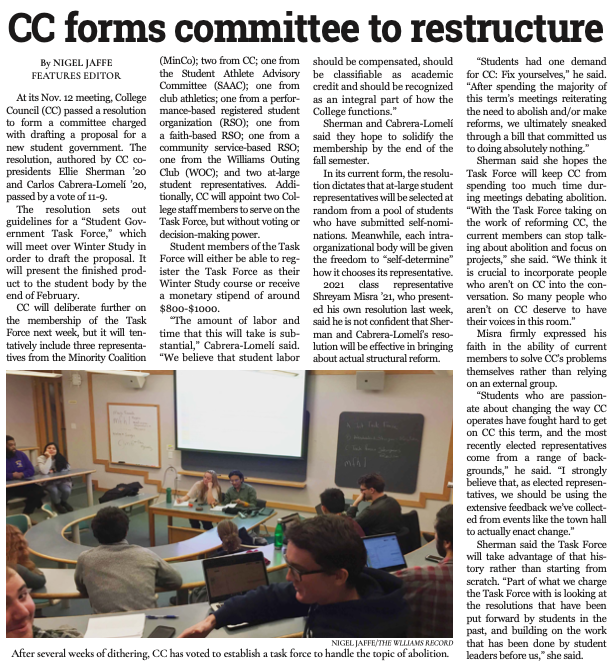 The Record published its first article about COVID-19 at the end of January, about students planning to study abroad in China returning to the College for the semester amid concerns about the virus — concerns few at the time thought would come closer to campus.

While the campus was beginning to digest preliminary reports shared by the College’s Strategic Planning Committee about the future direction of the College, the threat of COVID-19 quickly grew. Over the course of just a few weeks, the virus had spread throughout the world, first impacting students studying abroad, and affecting campus by midterms as Mandel announced on March 11 that students would have to leave campus within a week as the College transitioned to remote learning. 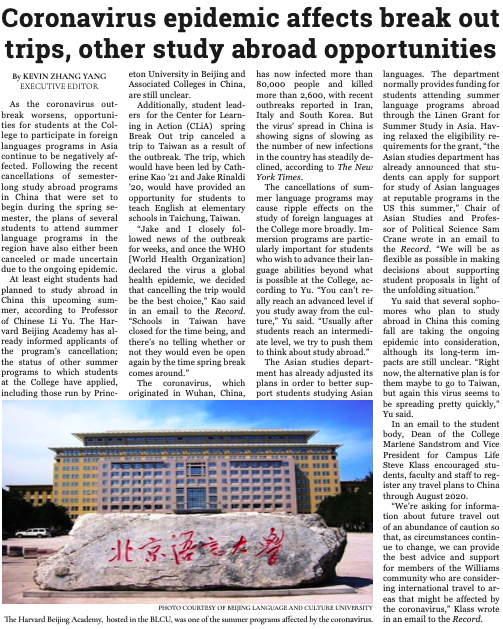 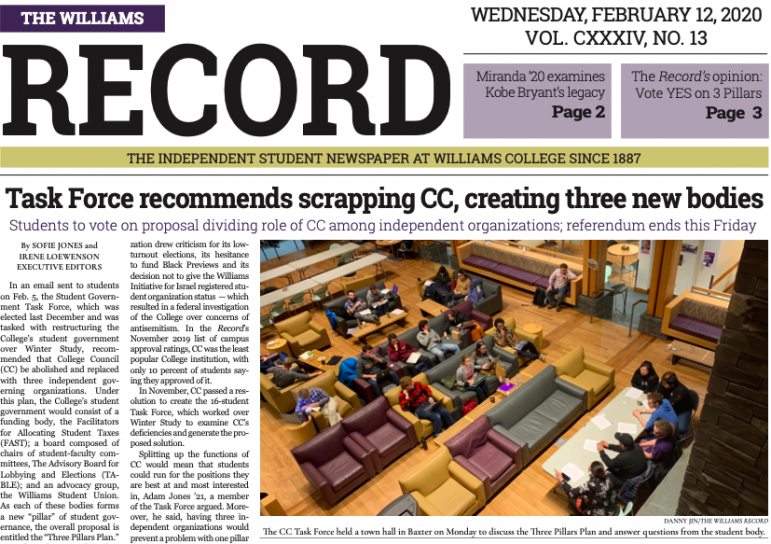 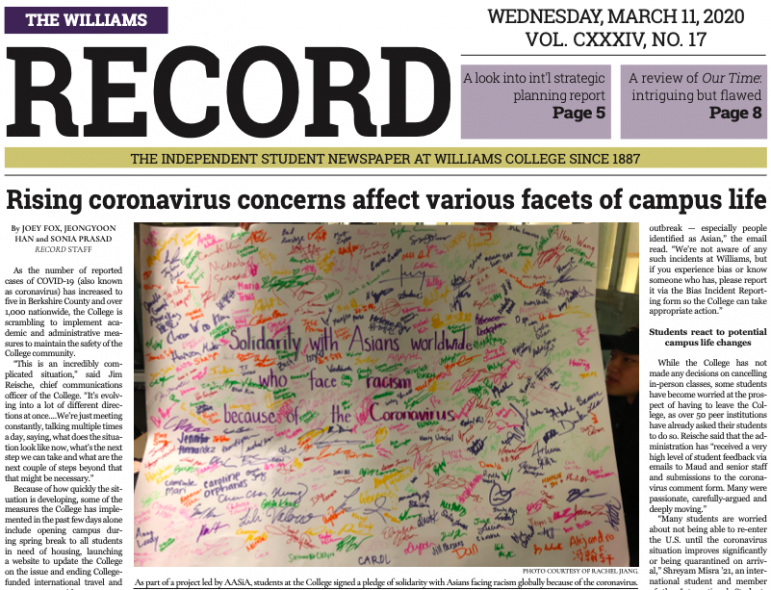 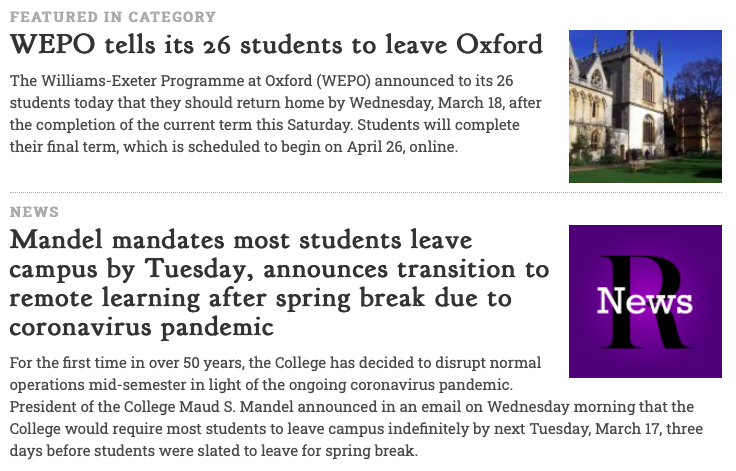 With the pandemic came mourning and loss of loved ones in our community. Faculty, students and staff alike had to navigate the challenges of running a college remotely as academic inequities exacerbated. The College adopted a mandatory pass/fail grading system for the spring term, and Mandel announced that commencement would be postponed until 2021. But the community found new ways to keep in touch with each other: from hangouts in Club Penguin to virtual Storytimes. Some living abroad are seeing life return to “normal,” while others have celebrated socially-distanced weddings.

The 2020-21 academic year looks uncertain, as Mandel is set to announce by July 1 if campus will be able to reopen in-person or will continue remote learning for the fall amid the pandemic. 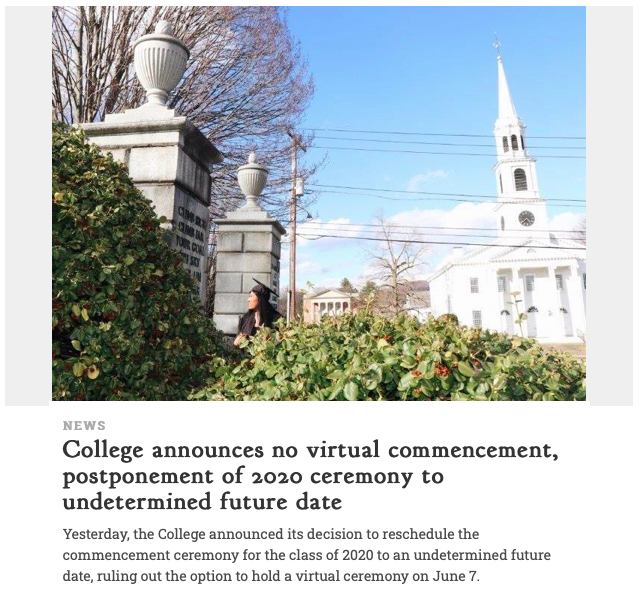 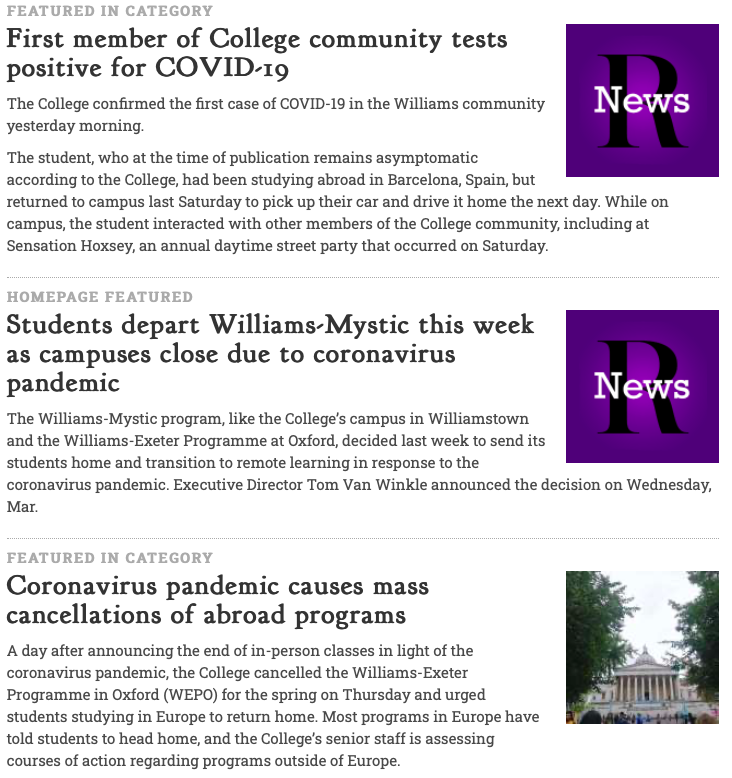 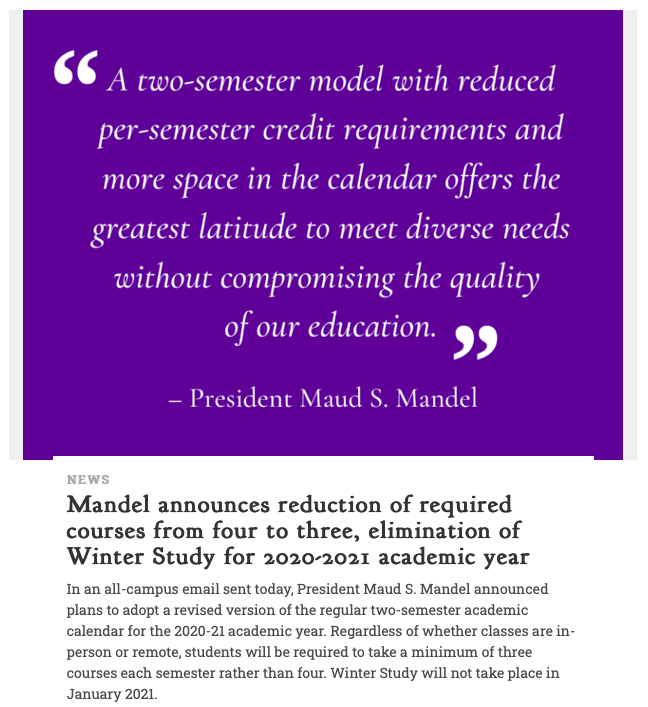 With four years coming to a close, the class of 2020 has much to look back on, with countless games, shows and late-night Snars filling the time in-between an exciting start and abrupt end to their time in the Purple Valley. The memories that this class will carry with them are, needless to say, unique only to those who have come to shape and be shaped by the College community. 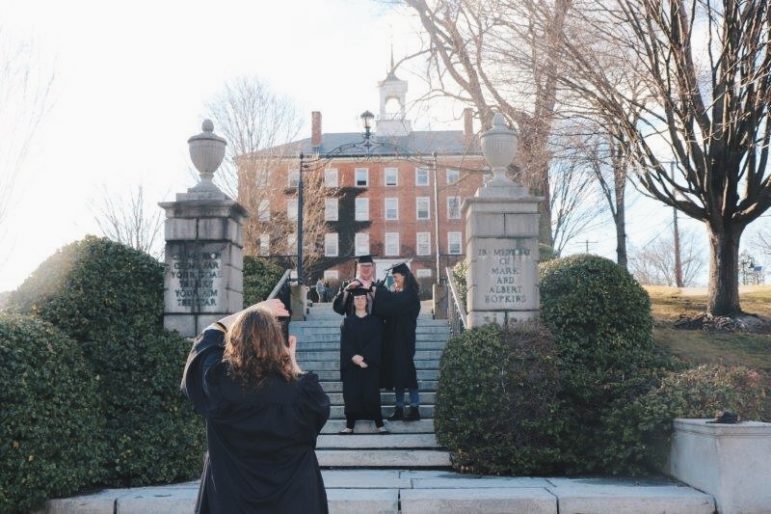 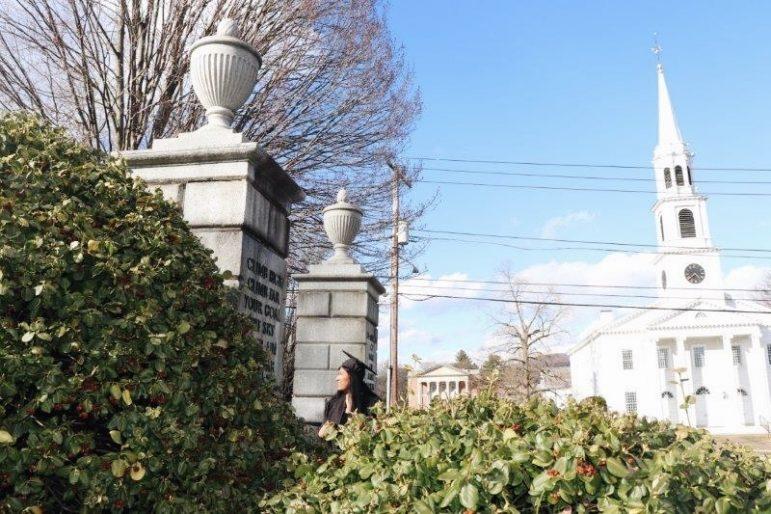 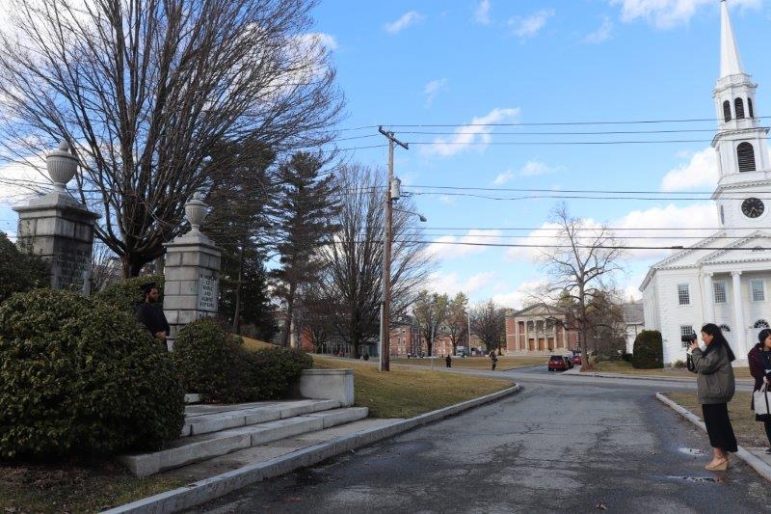 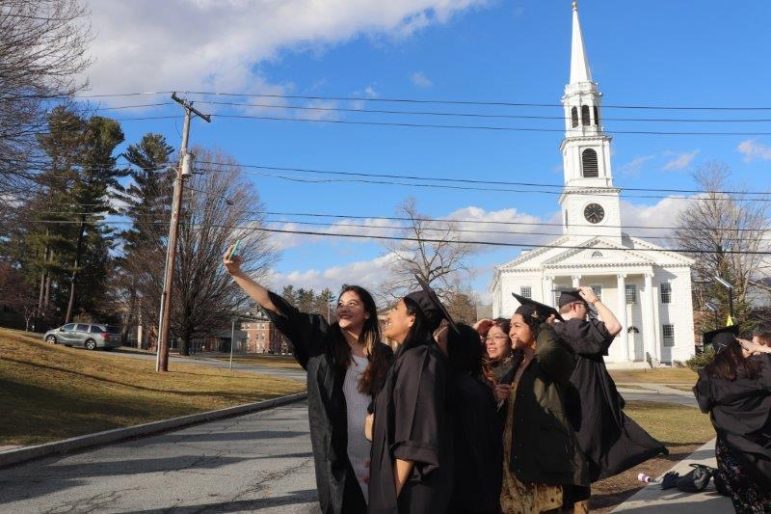