The Williams Record • May 23, 2020 • https://williamsrecord.com/301287/sports/spring-sports-teams-celebrate-their-seniors-despite-cancelled-seasons/ 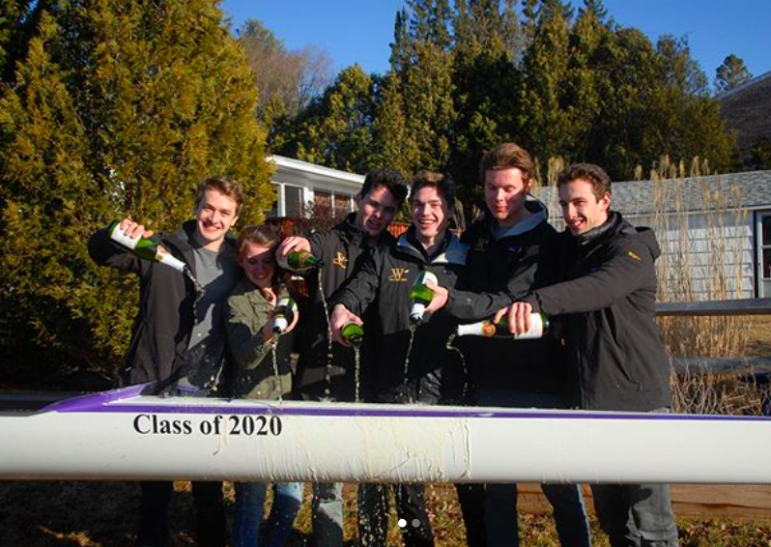 Men’s crew named their newest racing shell “Class of 2020” in honor of their graduating seniors. (Photo courtesy of head coach Marc Mandel and @Ephheavies on Instagram.)

A few days before campus closed in March, women’s tennis head coach Anik Cepeda had her team over for a hearty weekend meal. Over Cepeda’s home-cooked barbecue, the team spent several hours enjoying each other’s company. But there was more to this gathering than a casual chat: It was a celebration for the team’s seniors, each of whom received a “poster-sized collage of memories, pictures, and inside jokes,” Cepeda said.

This spring, women’s tennis will graduate four team members. By honoring them over “a few speeches and a couple enjoyable hours,” the team celebrated their contribution over the years. “They gave their best selves to the group, and that has a ripple effect.” Cepeda said, adding that their contribution is a large part of the team’s supportive network.

Like women’s tennis, many other teams whose seasons were cut short by the campus closure have chosen to celebrate their seniors with quickly organized group get-togethers and  modified last-minute banquets so that they could send off their graduating teammates in person.

For women’s golf, that occasion was in the form of a team dinner. “It was a great evening in highly unusual circumstances,” head coach Tomas Adalsteinsson said. Having just been told that their spring season got canceled and students were to leave campus, the dinner was an occasion where the team united under stressful times.

Aside from the banquet, women’s golf has also tried to follow the tradition of Senior Day, which happens at the end of each school year. Due to the special circumstances this year, the team took their celebrations to social media. “[It was] not nearly the same as being with them in person, but they will continue to be an important part of our team as alums,” Adalsteinsson said.

As one of the teams with a larger roster, men’s lacrosse will send off 13 of its members this spring. “This senior class has played a pivotal role in our most recent successes,” head coach George McCormack wrote in an email to the Record. “On the field, their talent and determination translated to wins against some very challenging opponents. Off the field, their leadership, and camaraderie were the building blocks for great team chemistry.”

The team came together remotely and celebrated their seniors over a virtual banquet.  “Every senior had an opportunity to discuss what they were thankful for and/or reminisce about some of their favorite memories.” McCormack said.

Similarly, women’s track and field celebrated its 15 members from the Class of 2020 in a moving moment of team spirit. According to head coach Nate Hoey, while the team traveled back from the canceled indoor national championship meet during the last week of in-person classes in March, “unprompted, the juniors went to work organizing a modified banquet to honor our seniors.”

The rest of the team managed to pull together everything typically done for an end-of-season celebration in less than 24 hours, before the date that students were asked to depart campus. “In their words, ‘We are not letting you leave campus without going through our year-end traditions,’” Hoey wrote.

These traditions include presenting the seniors with flowers, which they would usually receive at the last home meet of the year; printing and framing a picture for each senior, with a note from every team member attached to it; and, of course, the modified banquet in the form of brunch, where members shared stories of each graduating member and spoke about their impact on the team. “It was an awesome morning which highlighted the connection and support the team has for each other through good times and challenging times,” Hoey said.

As with the rest of the spring teams, the loss of their season was an emotional one for men’s crew. “The day we learned of the College’s move to remote learning, we gathered at practice, shed tears, and team members shared impromptu recollections of how each senior impacted them,” head coach Marc Mandel said.

The team organized a banquet at their boathouse where they honored each senior and named their newest racing shell the “Class of 2020”, according to Mandel. “While they didn’t race this spring, their name on our shell ensures they will race with us for years to come,” he said.

Women’s lacrosse celebrated their seniors with the Ephs’ heated rivals, Amherst. “We had an away game at Amherst before our season was canceled and asked them to also create programs for our seniors during their senior day,” head coach Alice Lee said. “So it was a Senior Day for both teams!”

After campus closure, the team adopted the idea of taking senior celebrations online through social platforms. According to Lee, the team has made videos and Instagram posts for their senior tribute, honoring their role on the team for the past four years.

Celebrations, however, could not compensate for the seniors’ lost season, and neither could weekly video calls compensate for the presence of their team in real life. When many athletes were looking forward to concluding their career at the College on a strong note along with their teammates, the campus closure prevented them from doing so.

While women’s softball has held similar celebrations for their four seniors, their reflection on the unexpected conclusion of their student-athlete experience will continue in the months to come. “The fact that we didn’t get to play this year is devastating,” head coach Kris Herman said. “Yet, like any season, [it’s] just a small part of one’s experience.”

Cepeda stressed the importance of forming long-lasting relationships as well. “My hope for this group is that they recognize ‘a moment’ isn’t actually what carries the greatest weight,” Cepeda said. “But that the collection of relationships that surround it do.”

For Chloe Henderson ’20, a graduating member of women’s tennis, the impact of her career as a student-athlete and the relationships she formed with teammates will remain long after her graduation. “My teammates are some of the few people I can completely be myself around and who have continuously taught, supported and inspired me,” Henderson said. “Williams tennis has been and will always be my family.”