The Williams Record • May 22, 2020 • https://williamsrecord.com/300844/features/pandemic-brings-financial-uncertainty-to-students-and-their-families/

Pandemic brings financial uncertainty to students and their families 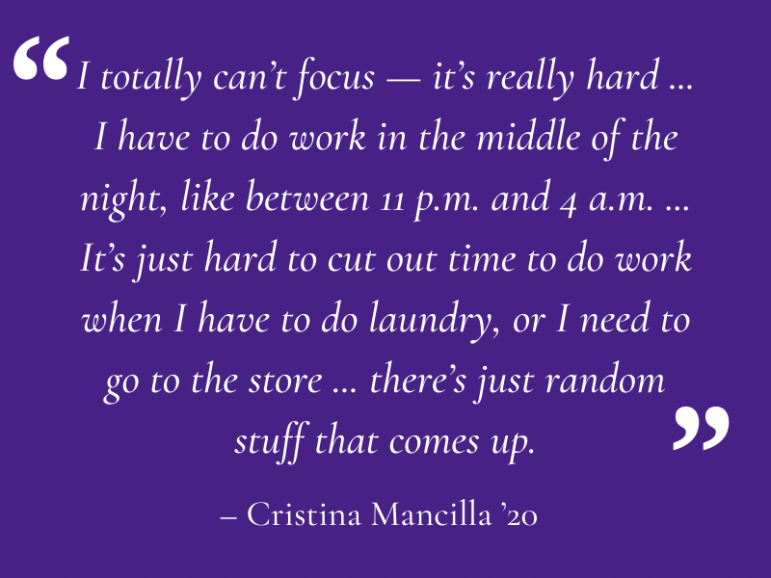 Jesus Estrada ’20.5 lives with his mother and sister in Huntington Park, Calif. Estrada’s mother provides most of the family’s income, and as an employee at a fast-food chain, she’s classified as an essential worker. But she also has diabetes, a condition that makes her more vulnerable to serious complications from COVID-19.

Estrada and his family have felt the financial impact of the pandemic acutely, in part because of his mother’s vulnerability. “[My sister and I] could get jobs, but we don’t want to put my mom at risk,” Estrada said. “But the idea is like if something happens and she’ll get in trouble [by becoming ill].”

When students left campus in March, some returned home to face the effects of an economic downturn that has already left millions of Americans unemployed. The uncertain trajectory of the pandemic has meant short-term anxieties about job security and lost household income for some, while generating longer-term concerns about their families’ financial stability for others.

Estrada’s concerns intensified after extenuating work circumstances forced his mother to go on unpaid leave for several weeks. With his mother temporarily unemployed, Estrada and his family had to confront the possibility of losing their primary source of income. “We were kind of like, are we going to [be able to] pay for everything? Because they haven’t stopped rent payments at all,” he said.

The uncertainty meant that he had trouble focusing on classwork as the semester continued remotely. “After that happened, like, you’re kind of on edge because … it was really hard to concentrate, because we didn’t know what would happen,” he said.

Estrada’s mother was eventually able to go back to work. But since then, his family has also relied on alternative forms of income, including financial aid provided by the College to Estrada.

“I’ve been using a lot of the financial aid credits they gave us at the beginning, with the $500 grant and then the refund for housing,” Estrada said. “That’s good enough to pay probably like one month’s rent in case we fall behind or something. So it’s mainly in terms of me trying to save money just in case something happens.”

Daniel Park ’21 said he is uncertain about his family’s future financial security because his father repairs and installs air conditioning and heating units for a living.

“The biggest short-term issue is that the workflow coming is kind of erratic, so it’s not as stable as it was,” he said. “A long-term concern is whether, on average, people are not going to have enough income to spend money on those services, and how that’s going to affect the workers at this company.”

“I remember talking to my family about the effects of 2008 and 2009, and those were pretty hard times as well, so I want to be optimistic and say that we can also get through the effects of this economic downturn,” he added.

His family has adjusted their lifestyle to take measures to avoid contracting the virus. “We are also definitely spending less because we are not going out at all, so there is a balance there between possible cuts to income versus reductions in expenditure,” he said.

Like Park, Ethan Hyatt ’21 also faces uncertainty over his family’s finances. While they are currently stable, he thinks his father’s income might be jeopardized by the pandemic.

Hyatt’s parents separated when he was young but decided not to get a divorce for financial reasons and to keep the family together. His father, who works as a truck driver, pays for day-to-day expenses, while his mother has built up savings from her time working in a radiology lab.

Bills “would probably come out of [my dad’s] paycheck, and mom, for any not-planned expenses or just things that might need to be covered in between paychecks, she has the money,” he said.

“We’ve never been hungry or wanting or anything,” he added. “She’s always done what she needed to do to make sure that we had what we needed.”

While Hyatt said he’s not familiar with his family’s finances, he thinks they are probably under strain because he and his sister are home again, meaning his mother needs to buy more food than usual.

“I guess, more recently, the savings are dwindling a bit,” he said. “In that sense, bills are tight, but … I have not perceived any super drastic expenditure or finance restraint, but I’m not the person who takes care of that, so I don’t have the whole picture.”

The mother of Cristina Mancilla ’20, who works at a Dollar General and provides the primary source of income for Mancilla’s family, has also had to dip into her savings in recent months. Recently, the store manager cut employee hours down by approximately 10 hours to 39 hours a week –– just an hour shy of the 40-hour minimum that would’ve qualified Mancilla’s mother for health insurance.

But with Mancilla, a friend from the College who was looking for a place to stay during the pandemic, Mancilla’s sister and her sister’s boyfriend all staying at home, additional financial strains leave the future uncertain for the family.

Government stimulus has helped, but only a little, Mancilla said. If her younger sisters start working, it would disqualify the family from receiving Supplemental Nutrition Assistance Program benefits, which have been critical in ensuring the Mancillas’ financial stability.

Mancilla said she did not plan on staying at home after graduation. But as the oldest child in the family, she said she feels a greater sense of obligation to support her mother during these difficult times.

“I just feel like I need to be more present — you know, be present emotionally and mentally,” Mancilla said. “And my mom is under a lot of stress, because of just everything that’s going on. So I feel like I need to talk to her a lot and just be around her and support her.”

Mancilla wants to help, so she offers her own savings to her mother, who refuses the money. “She gets really upset if I give her money.”

For Mancilla, it has been difficult to complete the semester, let alone focus on assignments, because she sees that there’s so much she could be doing to help around the house.

“I totally can’t focus — it’s really hard,” she said. “I have to do work in the middle of the night, like between 11 p.m. and 4 a.m. It’s like, I don’t know. It’s just hard to cut out time to do work when I have to do laundry, or I need to go to the store and get this, or someone needs help with something, or there’s just random stuff that comes up.”

In thinking of ways that she can help around at the home, Mancilla has become more open to finding any job that could support the family financially — even if they are unrelated to her interest in oceanography and marine ecology as a biology and environmental studies double major.

“Before the pandemic I was more hopeful that I would find a job in nonprofit, or something more that I’d be interested in,” Mancilla said. “But now, with a pandemic, I feel like the availability of jobs will be … kind of hurt. So it just made me more open to other positions.”

Her original plan coming out of her undergraduate career was to spend one or two years working in nonprofit, and then enter a graduate program, but those plans are up in the air for now as she and her family weather out the next few months.

In the meantime, Mancilla is trying to enjoy her time spending quarantine with her friend and family as much as possible. For Mother’s Day, the matriarchs of the family all came together –– in a socially distanced matter –– to celebrate the occasion.