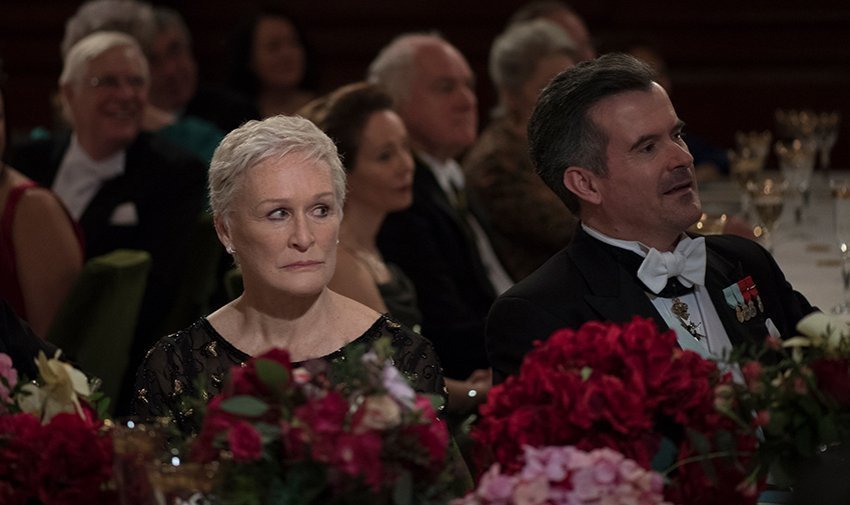 The Wife is an intriguing film, although its immense quality makes it at points hard to watch. The performances are so real, and the reality they capture so unsettling, that there are times when you wonder how much you are actually enjoying it – until all the uncomfortable details build to a thunderously satisfying climax that, while not wrapping anything up neatly, provides a much-needed emotional catharsis.

The Wife, directed by Bjorn Runge, is based on the novel by Meg Wolitzer. The movie is above all else a vehicle for a powerhouse performance by six-time Oscar nominee Glenn Close as Joan Castleman. Joan, the titular wife of newly Nobel-Prize winning author Joe Castleman, played with complementary aplomb by Jonathan Pryce, spends the bulk of the film in Stockholm for a ceremony that unceasingly feeds her husband’s ego while treating her like a respectable decoration.

The focus on award-ceremony parties, suffuse with high society and intellectual elites, quickly reveals itself as an excuse to expose the artifice present in the most painfully awkward moments of such staged celebrations. From strained introductions and stilted small talk to the banter that the men in the room think is much cleverer than it actually is, the film makes the audience feel Joan’s exhaustion and frustration with the proceedings even before the unfolding drama makes it clear that there is more to her life and her husband’s career than the public assumes.

Close shines in Joan’s public performances of contentment but really makes an impact in one-on-one scenes with her husband and son (played by Max Irons). Her son is an insecure aspiring writer who has a fraught relationship with his father. Joan lets down her guard some of the way but never makes it clear until the very end what she really feels. Her scenes with a hopeful Castleman biographer (Christian Slater)  are also revealing. He suspects the whole story is not what it seems but is unable to get Joan to tell him what he wants to hear, leaving the audience wondering not just what the truth is, but what Joan wants the public to believe.

Playing expertly off of Close’s eroding self-restraint is Pryce’s barely (if at all) restrained narcissism. In an environment where everyone is lining up to tell him how wonderful he is, Joe spends most of the film performing a faux-humility, in which his praise of his wife makes clear he sees her as a prop to his success as much as a person in her own right. This dynamic continues in their more candid private moments, where Joe’s affection, while definitely genuine, is weighed down by his expectations for her to forgive his transgressions and put up with the imbalanced lives they live in public.

No definite answers to the question of a sustained but fractured relationship are provided, and it is unclear until the end whether or not it is really unable to be salvaged. This drama is compounded by a chilling series of flashbacks detailing the meeting of Joan as a talented Smith College student with a knack for writing and Joe as a professor struggling to get his fiction career off the ground. There is clearly a genuine attraction between them that is complicated by Joe’s clear abuse of his power and insecurity over his craft. The slow build of revelations in both tracks of the narrative helps the audience understand where it all leads while still leaving them totally unprepared for the final culmination of Joan’s arc.

It is that emotional climax, with Close delivering a powerful monologue, that might finally secure her an Academy Award, which elevates the film from good to great. Joan’s pent-up rage over the course of several decades is unleashed in a way that reveals just how much she had been suppressing, even in her seemingly most honest moments. While it does not lead to a simple resolution to the plot, witnessing an unfixable wrong given some measure of justice just by being spoken of and acknowledged provides the audience with a visceral satisfaction.