The Williams Record • May 23, 2020 • https://williamsrecord.com/297372/features/seniors-celebrate-graduation-off-campus/ 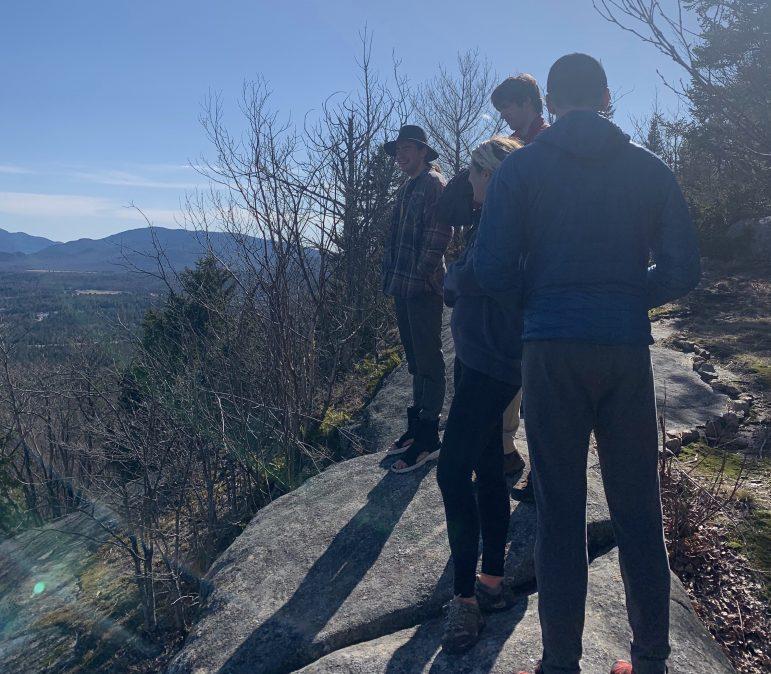 (From left to right) Seniors Jared Bathen, RB Smith, Emily Elder and Matt Wiseman stand atop the mountain they plan on hiking — in caps, gowns and hiking boots — when they celebrate their graduation.(Photo courtesy of Jackson Ennis.)

A group of seniors currently quarantining together in a cabin in Lake Placid, NY plan to celebrate their graduation by embracing the outdoors. The group, made up of some of the residents of Doughty House this past school year, plan to hike a nearby hill in their caps and gowns and call a special guest to deliver a speech. “[Director of Outing Club] Scott Lewis is going to be one of the speakers,” Jackson Ennis ’20 said.

While an in-person commencement for the class of 2020 has officially been pushed to an unknown future date, some seniors, including Ennis and his friends, are making their own plans to celebrate their graduation off-campus in the weeks to come.

There’s no doubt that hiking up a mountain in a cap and gown might be a bit impractical, but RB Smith ’20 said he is excited nonetheless. “I would love to get mud on my gown,” he said. “I figured having a gown with some mud on the hem would make a good souvenir.”

Smith also mentioned that this setting is perfect for the group of students, many of whom were involved with the Williams Outing Club during their time at the College. “We like the mountains, so we figured we’d graduate on a mountain,” he said of their plans. “We have found a lot of joy in being outside.”

The group doesn’t currently have a solid itinerary for the celebration, but caps and gowns, mud and Lewis will definitely be there. “I think maybe in the spirit of these unprecedented and unpredictable times, we’re choosing to be spontaneous,” Smith said.

Other seniors are celebrating back home with their families. For Nohely Peraza ’20, being at home adds the perk of being able to celebrate her graduation with her family, which she would not have been able to do at school.

“I actually wasn’t going to have any of my family members attend commencement at Williams due to personal reasons, and my brother would’ve been in the midst of his finals,” Peraza said. “I was already kind of dreading the day because I knew that I wouldn’t be able to have my family alongside me, so it’s been somewhat of a bittersweet circumstance to be able to be home with them.”

Peraza said that her family is planning a small gathering at home to celebrate her accomplishment of being the first in her family to graduate college.

“My parents already said they want me to wear my cap and gown and dress up as if I were receiving my diploma, and they’re gonna throw me a little party, probably cook some food and just spend time together,” she said. She also stressed the importance of the accomplishment for first-generation students in particular, as graduating college is a milestone that no one else in her family has seen.

Tiffani Castro ’20 said she was planning on celebrating her graduation with extended family from Honduras, but they are unable to travel now because of the pandemic. Instead, she, her mother, father and two siblings plan on dancing to reggaeton, zumba and salsa music, and eating Thai food, tamales made from banana leaves and apple pie at home in California. Since her older sister doesn’t live at home, the celebration will involve necessary COVID-19 precautions: leave the jackets outside, make a beeline for the bathroom to wash hands, heat the takeout in the oven and swap sandals for indoor shoes.

Graduation is especially momentous for Castro because she first entered the College in 2014. Over the course of her time at Williams, she took two years off for medical reasons.

“That’s why the whole family was very disappointed when the graduation got cancelled,” she said. “They understood, but they were very furious at the thought of having an online graduation because they wanted to see me walk the stage.”

Her extended family members in Honduras, who don’t have easy access to WiFi, plan on calling in over the phone during the party on June 6.

The timing of the end of this semester works out perfectly for Omar Kawam ’20, who is currently observing Ramadan along with his family. “The last day of classes is the last day of Ramadan, so I think at the very least we will be eating during the daytime,” Kawam said of his plans to celebrate graduation. “Krispy Kreme is giving out free donuts for people who are graduating this year and all you have to do is go up to Krispy Kreme with your I.D. or cap and gown and they’ll give you a free box of donuts on Tuesday, [May] 19, so we’ll be doing that.”

Other students plan to celebrate by playing online games and having Zoom calls with friends, baking a cake with parents and tuning into the online graduation ceremony hosted by YouTube that Barack and Michelle Obama will speak at on June 6.

Although Kawam said the current situation is “certainly weird” for students, especially seniors, he also said he has been taking time to embrace his surroundings and is trying not to focus on the news. “Just in general, take a moment to breathe and enjoy the weirdness,” he suggested. “Try to look for the beauty in the weirdness of where we’re all at.”