The Williams Record • May 21, 2020 • https://williamsrecord.com/297044/features/three-williams-students-experienced-covid-19-symptoms-these-are-their-stories/

Three Williams students experienced COVID-19 symptoms. These are their stories. 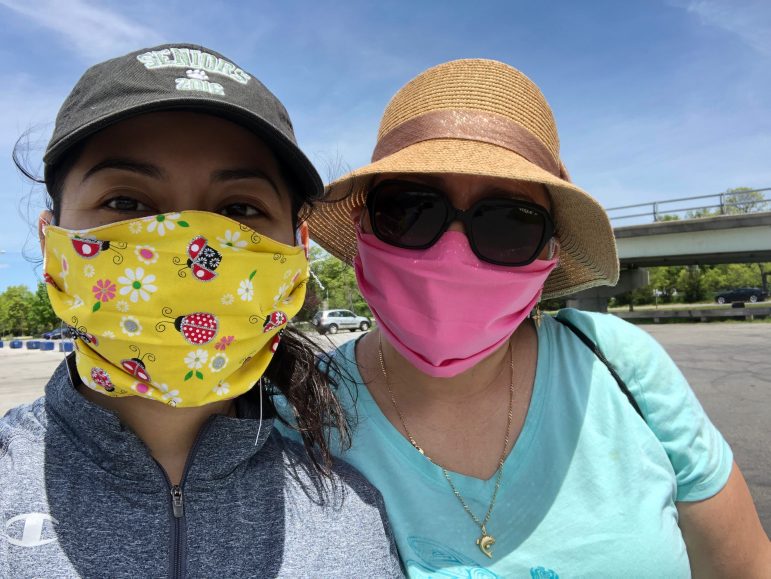 After battling with COVID-19 symptoms, Calle and her mother went for a walk last weekend in Flushing Meadow Park in Queens, New York. (Photo courtesy of Tania Calle.)

While many students at the College have felt the effects of COVID-19 from afar — financially, emotionally, academically — relatively few have come into close contact with the virus itself. But for three students, it has become intimately familiar. Tania Calle ’20, Kalina Harden ’21 and Max Mallett ’23 all experienced telltale coronavirus symptoms and either lived in or passed through an epicenter of the virus.

Calle had just returned to her home in Queens after an abrupt end to her senior year. “My first week [back] was very emotional, just because of leaving campus and sort of saying goodbye to everyone,” she said.

A week later, her parents were sick with symptoms associated with the coronavirus: lack of a sense of smell and fevers lasting for days. Soon after, Calle became sick too, fatigued and with a “ridiculous cough.”

She was unsure whether she and her family had contracted COVID-19, but alternative explanations seemed unlikely. Corona, the neighborhood in Queens that she calls home, has been hit hard by the virus. “It seems very, very unlikely that we sort of all got the flu in the midst of the epicenter of the epicenter in the world,” Calle said.

Since her parents were especially vulnerable, she was more concerned about them than about herself. Her mother has cardiac issues, and her father has both respiratory and cardiac conditions.

One night, while her father was experiencing trouble breathing, she and her mother had to make a decision: Take him to a hospital nearby, which was overburdened and struggling to treat all of its patients, or take care of him at home and risk that his illness worsens?

A few weeks before Calle went back to Queens, Harden was studying abroad in Barcelona. Her story provides a window into the early days of the pandemic, when most in the U.S. still had not realized how serious the novel coronavirus was.

Days before all of Spain was put under quarantine on March 14, “Everyone was acting like normal,” Harden said.

She had visited Milan in late February.

“I didn’t know that it was hitting Italy that hard at the time,” she said. “I wasn’t just like, ‘I’m going to dive in.’ The attitude surrounding the disease was so different. Nobody thought it was a big deal.” At the time, people were still comparing COVID-19 to the common cold, she said. She was still taking public transportation and going to beaches and bars with her friends.

After Milan, she took two day-trips to Madrid in early March. One day after her final trip, Madrid shut down, a couple days before the national lockdown.

Her program was canceled on March 15. She had originally decided to try to stick it out in her apartment in Spain, but she said she became lonely because many of her American peers had already left, so she flew home on March 19.

The day she left, she started experiencing classic COVID-19 symptoms.

“I was like, ‘Well, this is bad,’ and it happened to fall on the day when I’m doing an international flight, and have to wake up at like 7 a.m. … I had to get my ass to the airport, get on a plane, go through all the security and spend nine-plus hours flying, and then show up at [John F. Kennedy International Airport], wait, do a layover in JFK, then fly back to Indiana, then drive home.”

When she landed, she indicated on a pamphlet given to all passengers that she was experiencing COVID-19 symptoms, so she was stopped by Centers for Disease Control and Prevention (CDC) personnel when she got off the plane.

“I flew into JFK with a 101.4-degree fever and a bad cough and no sense of smell,” she said. “I’m literally delirious, like off my rocker, I’m so, so sick.” They scanned her forehead, and it was 101.4. Then they scanned it again because they thought it was a mistake, and it was 99.4, which she said is still a fever for her. And then they let her go. The pamphlet she had gotten on the plane advised her to self-quarantine, which she did when she got home.

Unlike Harden, Mallett was at home when he began experiencing symptoms, including bouts of fatigue and dry coughing. Having recently contracted Lyme Disease, Mallett had assumed the symptoms came from that rather than COVID-19.

But upon hearing of the symptoms, the doctors he was seeing for Lyme Disease, who specialize in infectious diseases, raised the possibility that Mallett had contracted the coronavirus.

“They were like, ‘Oh no, that sounds very much like coronavirus,’ which was very much a surprise because my family has been [in] pretty extreme isolation since me and my sister came back from college,” Mallett said.

The main tip-off was one of Mallett’s symptoms: “COVID toes” — purple or red bumps on the fingers or toes, similar to chilblains.

“You know when you’re cold and then you’re warm again and your toes get all tingly and sensitive? It kind of felt like that a lot,” Mallett said.

Harden, who has asthma, said she often gets sick, so the COVID-19 symptoms didn’t feel that out of the ordinary.

“It was kind of just like being sick for me, which is like all the time,” she said. “I had a cough, but I had already had a cough from bronchitis in the winter, so it was a continuation and worsening of that cough.”

But it was still a really difficult experience.

“Everyone was kind of staring all the time because I was coughing all the time and I’m an Asian,” she said. “And I got really, really tired and had a really high fever and was super cold, and I think it also paired with a sinus infection, so I also had a lot of congestion, which is not a symptom of COVID.”

The strangest part, she recalled, was losing her sense of smell.

“Usually, when I get sick, I can still smell,” she said. “It was like nothing, nothing at all, and I was like, ‘I’m literally cooking onions and garlic, and I can’t tell.’”

Her mother had been visiting her in Spain at the time she left, and Harden said she is fairly sure that she, her mother and her mother’s boyfriend all contracted COVID-19, although they never got tested. Harden’s mother and her mother’s boyfriend both lost their sense of smell, and Harden’s mother was extremely fatigued for a couple of days. When Harden called the appropriate medical professionals, they advised her to stay home.

Mallett, on the other hand, did get tested. Upon receiving his positive test result, he went into isolation at his home in Westchester, N.Y.

On that day in early April, Calle decided not to take her father to the hospital. “The nearest hospital to us is Elmhurst Hospital, which … was incredibly [at] overcapacity and at some point had 13 deaths a day,” she said. “The trouble there is it wouldn’t have been better.”

Faced with overwhelming demand, one medical resident at Elmhurst Hospital called the conditions “apocalyptic,” according to The New York Times.

Reflecting on the decision, Calle thinks she made the right choice. “[My father] recovered, and he’s fine,” she said. “We sort of made him use his inhaler and went through the process of understanding how to reduce his anxiety, because I think part of it is also being very afraid. And that’s how you’re interacting with your illness.”

Calle said she believes that this anxiety stems from the number of COVID-19 cases in her neighborhood in Queens, which has been one of the epicenters of the virus in New York. “A lot of people that we know and their families have [gotten ill],” she said. “My brother’s future soccer coach passed away. A lot of this was like — it was very close to us.”

In Westchester County, Mallett said he was able to access testing “pretty easily” at a local urgent care center. But the number of people who were trying to get tested in Queens resulted in long lines and crowded clinics, discouraging Calle from doing the same with her parents.

Across the East River from Queens, the Bronx’s Jacobi Medical Center has become a battlefield as swaths of people — mostly low-income and people of color — lined up in their cars to get drive-in coronavirus testing.

Mohammad Faizaan ’23 lives a block away from Jacobi.

The streets and shops of Morris Park, Faizaan’s neighborhood, are typically filled with Bronx residents. “My home is, like, in the middle of this,” he said. “We’re usually interacting with other people… But now because of coronavirus, a lot of movement has been limited, like my parents don’t allow us to go out most of the time and if we do, we have to exercise extreme caution [and] social distancing.”

Despite these precautions, scores of New Yorkers have gotten the virus. And as Faizaan reconnected with friends and family from the city, he realized his social circles had also been seriously impacted.

“A lot of people I know have gotten the virus — I would say 50 percent of my friends,” Faizaan said. “Whenever I contact [my high school and middle school friends], it’s always like, it was another person who got the virus or another person who passed away because of the virus. And hearing that news over the last three weeks has definitely been a big part of my experience with coronavirus, here in the city.”

Faizaan said he and his neighbors are worried, to say the least.

“Everyone’s scared of this virus,” he said. “I think the mood in the Bronx is like, ‘This is a scary disease, but we’re all going to try to band together to prevent it from spreading, and to help those who are helping other people, and help those that probably have it.’”

On March 19, three Williams students were in New York. Harden was landing in JFK after her abroad program in Spain was canceled; Mallet was back home in Westchester County; Calle was in Queens.

Although New York City is still enduring the pandemic, it seems that the worst has passed for Calle. Three weeks ago, her parents fully recovered. Last Saturday, they all went out to the park. It was something Calle said she had missed after being isolated at home for two weeks while taking care of her parents.

At the park, Calle said she found herself appreciating the things she once took for granted, like her ability to go on a run. Still, the past couple weeks haven’t left her. “It very much marked the way that I see myself and my appreciation for having my family and for the unpredictability of life,” she said. “It was very — it’s terrifying.”

She reflected on the night when her father was having trouble breathing. “I was sort of asked to make a decision that I’m very happy went the right way, but I could have been wrong,” she said. “I could have very much been wrong.”

Last weekend, Calle and her mother went for a walk in Flushing Meadow Park in Queens, New York. (Photo courtesy of Tania Calle.)