The Williams Record • May 13, 2020 • https://williamsrecord.com/294138/news/record-survey-results-elucidate-student-views-on-potential-fall-plans/ 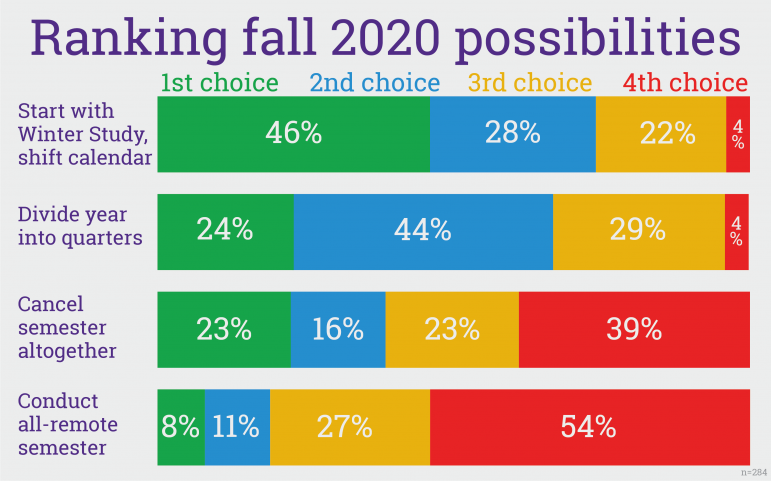 The Record’s survey measured student opinion on various possibilities for the fall semester in the event that students cannot return to campus. Starting the semester with a remote Winter Study ranked high, whereas canceling all classes and conducting a remote semester ranked lower. (Numbers may not add up to 100 due to rounding.) JOEY FOX / THE WILLIAMS RECORD

Last week, the Record sent out an anonymous survey to gauge student views on various possibilities the College is considering for the fall 2020 semester. The survey found broad dissatisfaction with online learning and a willingness to withdraw for the fall semester either if campus were not opened or if it were opened under flawed circumstances.

Of the 500 students randomly selected, 284 responded, for a response rate of 57 percent. Approximately 38 percent of respondents were first-years, 28 percent were sophomores and 34 percent were juniors. The survey was not sent out to seniors because they will no longer be students at the College this coming fall.

68 percent of respondents indicated that they would seriously consider withdrawing for the fall semester if campus remained closed and all classes were conducted remotely. However, only 61 percent of respondents who receive financial aid answered “yes,” compared to 78 percent who do not receive financial aid, a statistically significant difference.

To plan for the possibility that students do not return to campus this fall, the Ad Hoc Academic Continuity Planning Group produced a memo on April 23. Based on that, the survey gave a list of four broad scenarios: Conducting an all-remote semester beginning in September; dividing the academic calendar into a quarter system, with at least the first quarter off-campus; starting the year with a remote Winter Study, with the potential to return to campus afterwards; and canceling the semester altogether. 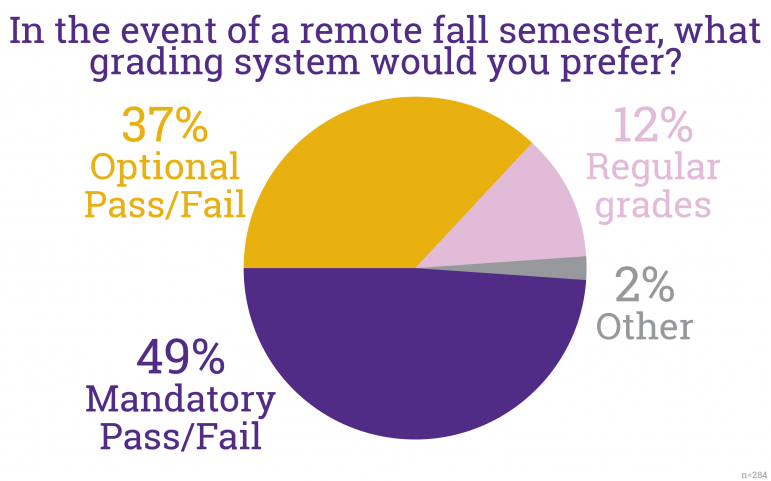 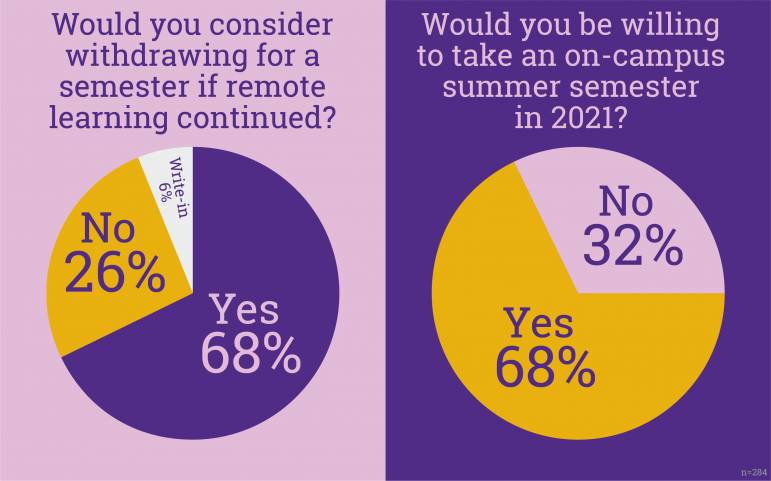 In the case of an on-campus fall semester, 59 percent of respondents said they would still seriously consider withdrawing if certain aspects of campus life were unavailable. Given the option to “check all that apply,”47 percent said the absence of small social gatherings would be a reason to withdraw, while 34 percent checked extracurriculars and 31 percent checked that they would withdraw if “certain classes” were unavailable.

Even if campus reopens, approximately 19 percent of respondents reported that they would consider continuing to take classes remotely. In answer to a question marked “check all that apply,” the most common reason for students to consider this option was personal health concerns, which 16 percent of respondents selected, and need or want to remain with family, checked by 10 percent. 6 percent of students surveyed cited financial concerns as a reason to remain off campus, and 6 percent also indicated they might have difficulty returning to campus.