The Williams Record • May 13, 2020 • https://williamsrecord.com/294108/sports/director-of-espns-the-last-dance-jason-hehir-98-reflects-on-time-at-college-filmmaking-career/ 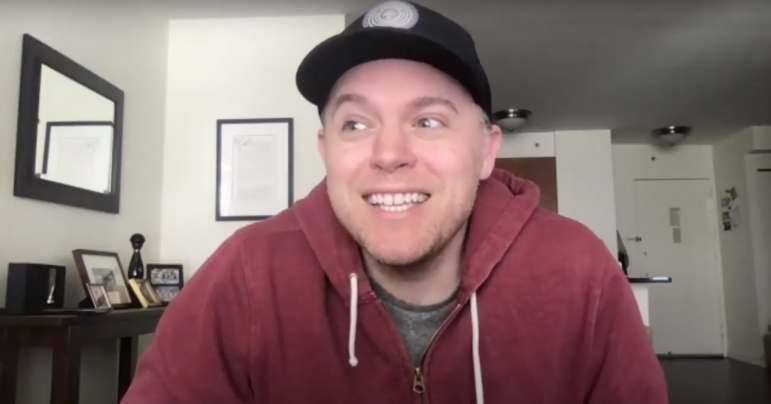 What if I told you that an alum of the College, remembered by his professors as the quintessential liberal arts student and now as a critically-acclaimed documentary filmmaker, is the biggest name in sports right now?

With professional leagues and tournaments around the world suspended indefinitely due to the COVID-19 pandemic, ESPN’s The Last Dance, a 10-part series on Michael Jordan and the 1997-98 Chicago Bulls, has been the talk of the sports world. The documentary, which debuted on April 19, chronicles the life and career of the athlete whom many consider to be the greatest basketball player of all-time.

Jordan, of course, is the star of the show. But the director of the film, Jason Hehir ’98, has also won his fair share of plaudits, especially from sports fans deprived of live games for more than two months. Hehir said viewers have reached out to thank his team for providing a little bit of an escape each week.

“It’s been really gratifying for myself and for my team,” Hehir told the Record. “You know, we have been locked away in a cave for two years editing all these episodes and not knowing how the world was going to receive them.”

The reception has been positive, to say the least. The premiere smashed ratings records and just about monopolized the list of trending topics on Twitter at one point during the two-hour broadcast. Following each episode, Hehir has typically appeared on SportsCenter, ESPN’s flagship program, to give viewers an inside look at the making of the film. He has also sat for interviews with the New York Times, Rolling Stone and GQ, among others.

While the lack of live sports has certainly increased the level of interest in the series, the documentary was already greatly anticipated before the pandemic. It was supposed to air during the NBA Finals in June, giving fans a long-awaited look at a famously elusive figure idolized by millions around the globe.

When the season was stopped, a social media campaign clamored for ESPN to move up the release date. The network obliged on March 31, which left the filmmakers with less than three weeks until the premiere. Even after the first two episodes aired, Hehir said his team was working through the following weekend to finish the final shows.

This Sunday night, the two installments that the entire series has been building toward will conclude the 10-part docuseries. For Hehir, the episodes, which cover the end of the 1997-98 season, brought back some of his strongest memories of campus life: bonding over sports with his teammates from the College’s baseball team.

“We lived in Poker Flats,” he said. “It was myself and five guys we played baseball with, and that’s pretty much all we did is sit there and watch sports. We watched the Bulls religiously that season.”

A senior at the time, Hehir said the Bulls were on national television all the time and, with the limited cable packages available, he and his roommates would watch Jordan more than the hometown Boston Celtics. As the school year drew to a close, the playoffs — the final games of Jordan’s career with the Bulls — even coincided with Hehir’s final days at the College.

“I remember, when they were deep into the playoffs, that’s when we had Dead Week before graduation so we were down in Cape Cod,” Hehir said.

He said he and his friends watched the down-to-the-wire Game 7 of the Eastern Conference Finals against the Indiana Pacers on Cape Cod before returning to campus for commencement as the championship series against the rival Utah Jazz tipped off. He added that everyone in his friend group was rooting for the Bulls to complete their second three-peat.

Hehir graduated from the College with a double major in English and political science. The future filmmaker knew that he enjoyed writing and felt that writing-heavy majors gave him the best chance to succeed.

“You can coherently articulate yourself and form a rational argument and write your way out of a lot of jams,” he said. “It’s tough to fail a paper, but you can definitely fail a science test.”

Yet he did not think of himself as a stand-out student.

“I was just trying to academically survive in a very deep pool with some extremely intelligent students,” he said. “I was the kid who sat in the back and had my hat pulled down over my face low enough praying that the professor wouldn’t call on me.”

His professors, however, remember him very differently. Professor of Political Science Cheryl Shanks, who taught Hehir in two courses, described him as a “deeply thoughtful person” who, as a political theory concentrator, was “always reading philosophy.”

Hehir thrived, particularly in a ground-breaking upper-division English course called “Documentary Fictions” that Professor of English Shawn Rosenheim was offering for the first time. In an email to the Record, Rosenheim credited Hehir with helping to make the course, which was most recently offered at the College last fall, a success.

“I felt like I was out on a limb (reality television seemed a very odd subject for an English professor back then),” Rosenheim wrote. “I ended up having a great experience, largely because so many of the students, Jason prominent among them, really became collaborators in trying to figure out what it meant that video was becoming a ubiquitous feature of the world.”

Only days after finishing the last episodes of his blockbuster film, Hehir looked back and lauded Rosenheim for predicting the rise of reality television, as well as a new documentary genre, in the course.

“Part of syllabus was the Tonya Harding sex tape,” Hehir remembered. “It was just bizarre things that we were watching to talk about how cameras were becoming more ubiquitous and home videos were proliferating and reality TV was proliferating.”

The thread between the course and his approach to filmmaking was not lost on Hehir. The starting point of The Last Dance was a gold mine of behind-the-scenes footage, captured by a private film crew during the 1997-98 season and then stowed away in a vault, that had acquired near-mythical status over the years. Candid moments between Jordan and his security guards featured in the final cut have been some of the most well-received of the series.

“That was formative for me at Williams,” Hehir said. “I wish that they had had more of a program. Maybe they do now, but they didn’t have much of a film program back then, so I couldn’t really scratch that itch.”

After graduating, Hehir worked in finance for three months before he received a call from Sam Flood ’83, who worked at NBC Sports and is now executive producer for production at the network. Hehir had written 82 letters to alumni in TV and film the previous winter break and had even traveled to New York to interview with Flood during the following semester, but NBC Sports had been unable to hire him at the time.

“I owe everything to Sam because he’s the one who gave me my start in this business,” Hehir said. “I probably would be working at Merrill Lynch or something if not for him.”

While Hehir still dreamed of becoming a sports anchor — he originally planned to stay at NBC Sports for five years before moving to a small market and trying his luck on-screen, with the goal of working his way back to a Boston television station — he met the legendary broadcaster Bob Costas, who asked him to move to HBO and work on a new show.

His experiences at both networks allowed him to hone his craft, but he eventually founded his own company, JMH Films, to work on larger projects. He has directed three films in ESPN’s 30 for 30 documentary series, including ratings hits The Fab Five and The ’85 Bears. His most recent project prior to The Last Dance was a documentary for HBO on the professional wrestler and actor best known as André the Giant.

Yet The Last Dance was always going to be a different kind of project. In addition to the hours and hours of never-before-seen footage, Hehir would have a cast of interviewees that ran the gamut from singer Justin Timberlake to former president Barack Obama.

A community organizer and civil rights attorney in Chicago during the 1980s and 1990s, Obama speaks to Jordan’s complicated relationship with race and activism. The documentary was praised last week for its treatment of Jordan’s “Republicans buy sneakers, too” comment during the 1990 North Carolina Senate race.

Critics have also taken note of the musical choices made by the filmmakers; a New York Times Arts section piece profiled the soundtrack on May 5. Hehir said much of the music takes him back to his life between the fall of 1994 and the spring of 1998.

“A lot of the music that we used in this doc is the exact kind of music that was played in the dorms and certainly in my hallways at Williams,” he said. “All that golden era hip hop, that’s all we listened to.”

From memories of watching basketball and playing music made with his friends, to questions on documentary-making and political philosophy raised in his classes, Hehir has carried forward what marked his time at the College into his career.

As Shanks reflected: “A starting varsity athlete who double majors in English and political science, is drawn to justice and ethics in both and goes on to profile and interview complicated people — if that’s not the essence of liberal arts, what is?”