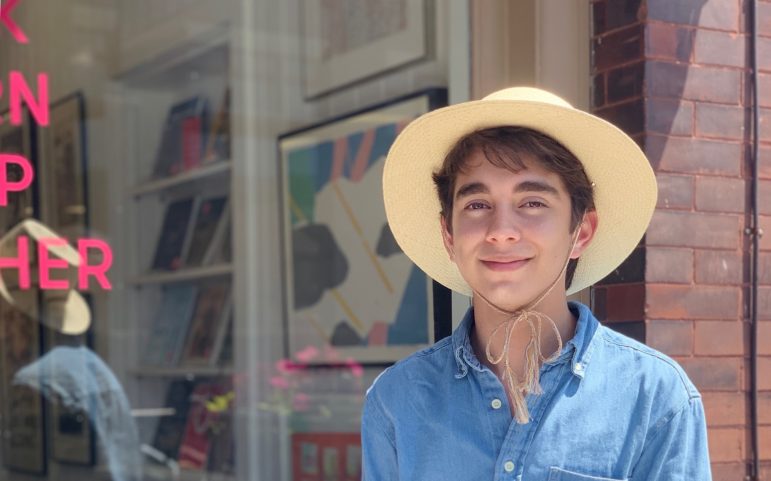 The way I see it, there are two kinds of artists: those who use art to reflect their reality, and those who use art to escape it. The former find solace in autobiography, creating works that explicitly mirror their own life experiences, or consuming art to which they can easily relate. The latter enjoy art as evasion, watching movies to live any life but their own, or making pieces that transport them away from their everyday.

After our first few minutes of talking, I think I have Javier Robelo ’22 pegged as the escapist type.

“I’m really into fictional characters and creatures,” he tells me. “I feel very much inspired by cartoons and children’s book illustrations — those are things I think about while doing my stuff. I don’t really like going for a hyper-realistic style. I feel like cartoons are just cute, if that makes any sense. Everyone likes them. They’re kind of just silly and very comforting. I would say, with my subject matters, I try to go for ‘as far away from reality as possible,’ going for bizarre — like, I want it to make absolutely no sense at first sight.” 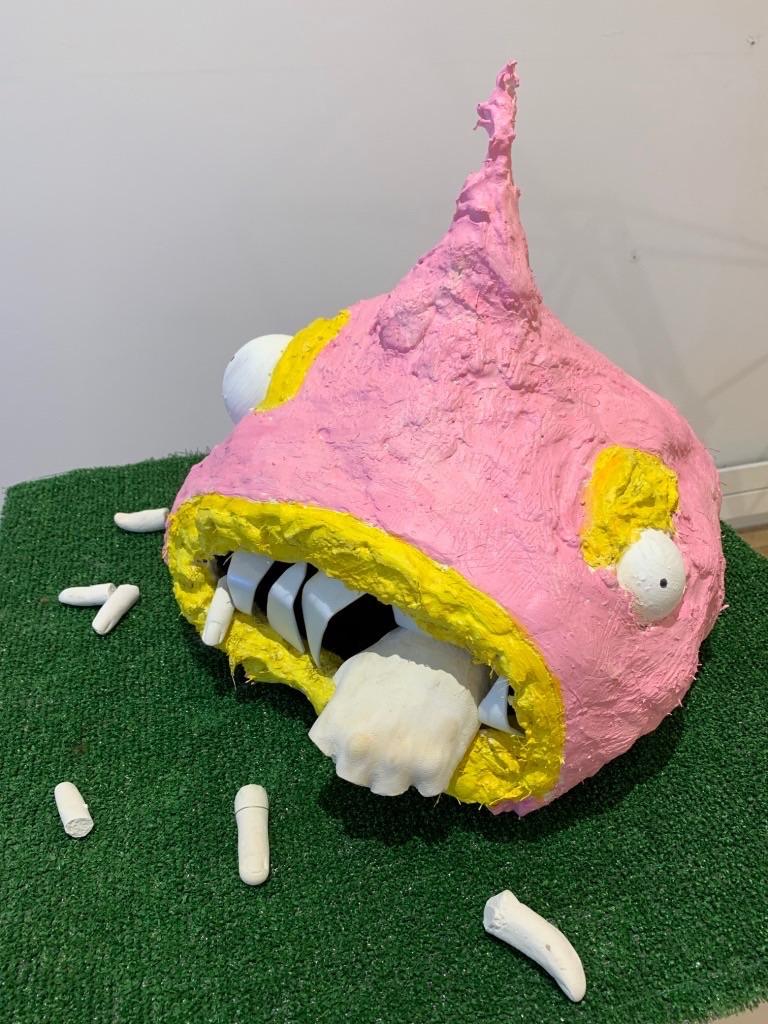 A plaster sculpture made by Robelo last fall. (Photo courtesy of Javier Robelo ’22.)

A prospective art history and studio major, Robelo hails from Managua, Nicaragua — though when we FaceTime he is quarantining with his uncle “somewhere near Tampa, Florida.” He wears a brightly colored striped shirt and speaks thoughtfully, taking up air as he mulls over my questions.

Beside him lay a few of his latest works, which he periodically raises to the camera. They are linocuts — pieces made using a printmaking technique that involves carving sheets of linoleum — and feature large, incredibly detailed bug-like characters.

“I start with these little monsters, and I try to put them in somewhat human situations,” he says. “To have it make the least sense as possible … I use that as a starting point. As for how it looks, I often try to make sure the final product shows I spent a lot of time on it, which I often end up regretting, because I end up having to actually spend a lot of time on it, but, you know, it pays off. I feel like art that shows that someone spent a certain amount of time doing it just evokes a certain sense of awe. I want people to enjoy looking at my work as much as I enjoyed making it.”

There is something so lively about Robelo’s art. His linocuts expand on a world that he began inventing through several other kinds of media: marker drawings, sculpture and digital images, to name a few.

He prioritizes experimentation as an artist, “going for things I haven’t done before,” as he describes it. Yet he does so while maintaining a distinct flair, incorporating his “little monsters” and cartoonish style across these various modes. Ultimately, he has created a body of work that both showcases a wide breadth of impressive technical skill and manages to remain entirely cohesive.

In other words, Robelo is a world-builder. Whether they live in a linoleum, graphite or oil paint, his figures seem to be conversing with one another, evoking a sense that at any moment they may jump into the frame of another one of his works.

“I do repeat characters,” he explains. “It’s like a whole little cast.”

Oil painting made by Robelo at the College, spring 2019. (Photo courtesy of Javier Robelo ’22.)

The color and playfulness of Robelo’s world are especially attractive now, as the coronavirus pandemic darkens our collective reality.

“Art is the only work that I can actually enjoy doing during these times, cause I do not enjoy writing essays,” he said. “I usually would, but sitting here just spitting out words is exhausting. I find art-making very fun and entertaining, and it’s a great way to procrastinate, considering it’s for class. So I’m just like, ‘Oh, I have to write an essay… how ’bout I work on my linocuts? You know, they’re due Monday, which is right around the corner…’”

As we get further into the conversation, though, it begins to become clear that Robelo’s work is not quite as escapist as it may at first seem. It is vivid, yes, but it’s not necessarily happy. And while Robelo does not feel like he consciously attempts to make work which reflects his current state or the state of the world, he concedes that he’s “somewhere in between being conscious and not conscious of it.”

“The subject [of each work] comes not very intentionally— I’m not like, ‘Oh, I’m gonna make art about quarantine.’” he said. “I think, ‘Oh, I’m gonna make a fish inside this bottle, and then while I’m making it, I’m like, ‘Why is this fish trapped? It is very much just, like, being trapped at home.’ And I’m like, ‘Wait a minute…’ Not fully intentional, but it happens.”

In this way, Robelo fuses fiction with reality without even thinking about it. He makes art which gives its observers a sense of comfort, teleporting us to a place of refuge from whatever is plaguing us. But once there, we might just find a message about what it is we were trying to escape.

At least, that’s often how it goes for Robelo.

“Sometimes I’m like, ‘I’m just gonna do something pretty, it’s not that deep,’” he said. “But then I go for it and then I’m like, ‘Wait a minute, am I analyzing my whole existence with this?’”

He continues, “One time, in my sculpture class, someone was like, ‘are your works autobiographical?’ and I was like, ‘that’s a good question.’ Because when I look back at them, they kind of are. It’s kind of like, I don’t wanna perceive that, but it’s there.”