The Williams Record • May 13, 2020 • https://williamsrecord.com/293734/news/college-implements-face-covering-policy-alters-social-distancing-measures-on-campus/ 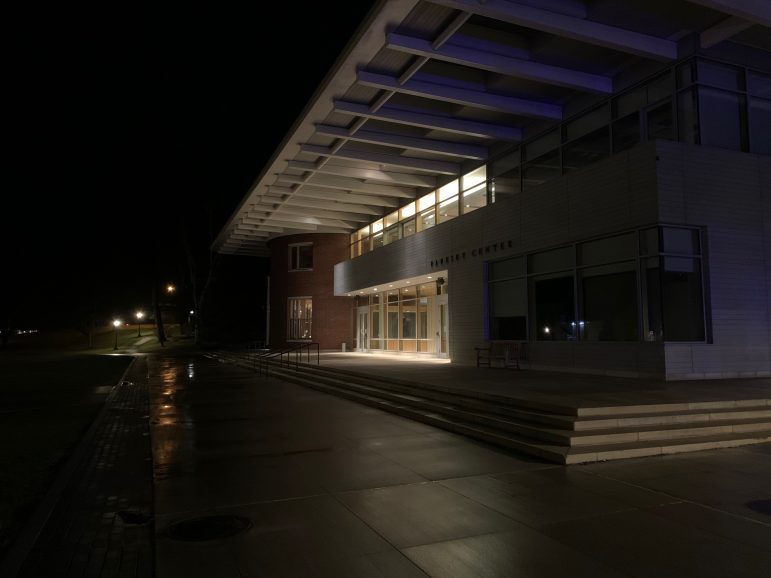 As a result of College social distancing policy, the Paresky Center is only open between 9 a.m. to 1 p.m. on weekdays for mail retrieval. (Kevin Yang/The Williams Record)

On May 6, the College began requiring all essential staff and students on campus to wear face coverings in situations where social distancing is not possible, a response to Massachusetts Governor Charlie Baker’s May 1 executive order requiring face masks or cloth face coverings in public spaces.

In an email announcing the policy, Director of Student Life Doug Schiazza explained that face coverings would be required in order to enter and pick up food at Driscoll Dining Hall, the only dining hall currently open to students. The College had already taken several measures to ensure social distancing in Driscoll Dining Hall, including the installation of fiberglass sheets separating the food preparation area from the food line and six-feet separations marked in tape to ensure that students are standing adequately apart while waiting in line.

Under the new policy, students are also required to wear face coverings in common spaces in residential halls. “Though the residence halls aren’t open to the public, they’re also not the same as residing within a family household,” Schiazza wrote in an email to the Record. “Because students sometimes pass through common areas & near bathrooms, through hallways, etc., there’s a possibility of coming into relatively close contact with another student.” Schiazza emphasized that “abundance of caution is the key.”

The College previously distributed cloth headwear to students approved to remain on campus on April 8, with a recommendation that they be worn where social distancing measures are hard to maintain. This measure was taken in response to then-recently released Centers for Disease Control and Prevention (CDC) guidelines recommending the use of cloth face coverings.

Like students on campus, all staff providing essential services have been required to wear face coverings while working on campus starting on May 6. An announcement made to College staff said that “essential staff in facilities, dining services, campus safety, the library, and mail operations have been issued cloth face coverings,” while staff who “occasionally come to campus to perform a critical function are expected to have their own face covering.” The announcement also said that staff without face coverings will be asked to return home, although a limited backup supply is available for those who forget their face coverings and “must be at work.”

Dining Services has reported 100 percent student compliance with the face covering policy, according to Director of Campus Safety and Security Dave Boyer. “I’m happy to say there has been no need for enforcement of the state policy requiring face coverings that went into effect this week,” Boyer wrote in an email to the Record. “The vast majority of people are doing an excellent job of following the policy.”

In addition to requiring face coverings, College social distancing policy has also meant that the College has had to constantly reevaluate the availability of some campus buildings and facilities. “CSS, in conjunction with the Operations Group, has been meeting daily for the last two months with a key focus being how to make the campus as safe as possible by reducing risk,” Boyer said.

Although this has meant closures of outdoor recreational facilities after reports of social distancing violations, several of these facilities, including the tennis court and track at Weston Field, have recently reopened. “Some of the restrictions on the use of outdoor spaces have been relaxed recently and will remain that way as long as these areas remain safe,” Boyer said.

Some student common areas, however, such as the Gibson Room in Dodd House, have remained closed after reports of student gatherings in violation of social distancing policy. According to Schiazza, these measures were taken in the interest of health and safety precautions and complying with the Governor’s orders about such gatherings.

While the academic year will end on May 25, students who were previously approved through the petition process to stay on campus or access campus resources will be allowed to continue to do so through the summer.