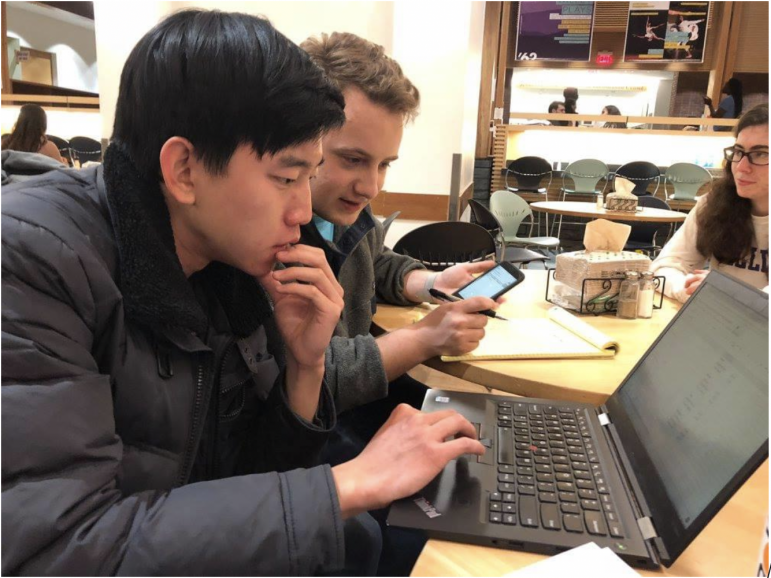 Jin, left, and Goldrosen, right, worked together on a story in which they ranked all of Whitmans’ late night offerings. (Photo courtesy of Danny Jin.)

Danny Jin ’20 and Nicholas Goldrosen ’20 served as editors-in-chief of the Record in 2019. For our last regular issue of the spring semester, current Editor-in-Chief Samuel Wolf ’21 sat down with them to discuss trustee resignations, sleepovers in Paresky and typos on the front page.

Samuel Wolf (SW): Do you ever find yourselves missing the Record?

Nicholas Goldrosen (NG): I think for both of us, during our time as EIC [Editor-in-Chief], we thought, “Wow, there’s a lot going on — it’s a pretty wild semester to be the editor,” and then this came along. So that puts things in perspective, certainly. On the one hand, I do miss it. I think that there’s a certain level of investment you have when you’re on the paper that allows you to be an engaged citizen in the school community. That was something that I appreciated, but I’m also grateful in this really chaotic time to not have that responsibility and to just be able to focus on other things.

Danny Jin (DJ): Yeah, I think I miss it every now and then. When the first issue came out, I kind of flipped through it and thought back to, wow, three years ago, Nick and I had just started as editors and we just made our first issue, and that felt like such a big thing. Maybe I kind of miss it, but it felt awesome to see that you’re carrying it on and doing such cool things, especially now. I do miss it, but maybe not the stress of it.

NG: I certainly miss the people.

SW: Is there any decision that you made or any action that you took while you were EIC that you’re particularly proud of?

NG: Going into this position, I had maybe five goals that I wanted to do, and at the end of the semester, maybe three of those were accomplished. The thing that I was most grateful for — and this is not at all anything that I did, but something I was lucky enough to have — is that Record staff were all so engaged in contributing their own ideas and figuring out new ways to move the paper forward. One example is in the coverage of campus controversy and thinking through things like what was going on in the English department in both the spring and the fall. I was really, really impressed by the way that the staff worked through various issues. They were engaged in developing our own journalistic practice and consistently improving along the way.

DJ: I was also really proud of the way that our staff approached weekly coverage when I was Editor-in-Chief and afterwards. One of the concerns that I had going into that semester was that some of the work we were doing would start to feel routine. I am proud of the new people we hired, who brought such enthusiasm and also openness to self-reflection. And of course there’s the front-page editorial that we published. I don’t think that is something we’d really done too much before. That year, I think we started thinking more about, what do we want to achieve with our coverage? And we put out some really good issues. I felt really proud after we published the staff issue on April 3rd. It came out right after spring break, which is not something we typically do, publishing the week that we get back. But everyone showed up and worked. It just confirmed for me that we had an awesome group. We took this thing that we never really tried before, we ran with it and we succeeded.

NG: Oh, I do have one discrete thing I remembered. I’m proud that editorial meetings started and ended on time.

SW: I cannot say that has happened for me. I’ve struggled greatly with that.

DJ: Sam, that might have been my fault. I kind of set that precedent. I’m very thankful that Nick brought us back to some form of punctuality.

SW: Do you have a favorite moment that sticks out from your time at the Record?

NG: Journalistically, one that I was really proud of was during the second or third week on the job for me and Will [Newton ’20], when one of our trustees, Joey Horn [’87], resigned. It was the first real story that Will and I worked on. That was something I was proud of in terms of actually working through a really complex set of facts, and a lot of people, in a long timeline, in multiple countries, and producing what I felt was a fair and accurate piece. On a personal level, I think one thing I recall is the end of our year as section editors, before our very last production. We decided, 10 or 12 of us, to have a sleepover in the office and just reminisce and chat and hang out. I really enjoyed that camaraderie among our year, the Class of 2020, on the Record. And that’s something that I’ve really valued over my entire time on the Record.

DJ: Yeah, that sleepover is one of the first things that came up for me too. Prior to joining the Record as an editor, my first semester, I hadn’t really done much. That last issue as a section editor, I felt like we’ve done this thing together and formed these bonds that I’m truly grateful for. That really stands out. Also, this isn’t a specific memory, but just your random, say, Monday night, when you stay there way too late and fool around. I think I have a definite memory of those times.

SW: How do you see the Record as having influenced your time at Williams?

DJ: I can’t imagine what my time what my time at Williams would look like without it. I know that’s kind of cliché, but literally, almost everyone I talk to is from the Record. We kind of joke about how the Record started to really dominate my life in a way that I never would have foreseen. I remember, in Winter Study of my first year, one of my entry mates just said, “Hey, let’s apply for this thing.” And I said, “Yeah, sure.” I had nothing else to work on, so I did this application. Later, the bonds that we formed just from going through the whole process together, the late nights in the office working, made us feel like we were in it together. Writing stories also helped me get to know Williams and even the broader Berkshire community in a way that I don’t think I would have gotten close to doing otherwise.

NG: Yes, I echo everything Danny said. Something I appreciate from the Record is that it’s a student-led organization and it’s also one in which we make mistakes along the way. There are errors, misjudgments, oversights — everything from criticism that a story wasn’t fair, to an op-ed that sparks controversy, to if we print a title that has the word “faces” on it twice on the front page. All of those are mistakes that are in a very public eye. And it is actually something I’m really grateful for. I think it forces you to take accountability and grow. This sort of experience allows you to think deeply about a community that we’re a part of and care deeply about, to do our best at serving that community, making mistakes and stumbles along the way and growing from those. That’s an experience I’m really thankful for.