The Williams Record • May 13, 2020 • https://williamsrecord.com/293654/news/many-students-are-considering-taking-semesters-off-or-gap-years-the-college-will-let-them/

Many students are considering taking semesters off or gap years. The College will let them. 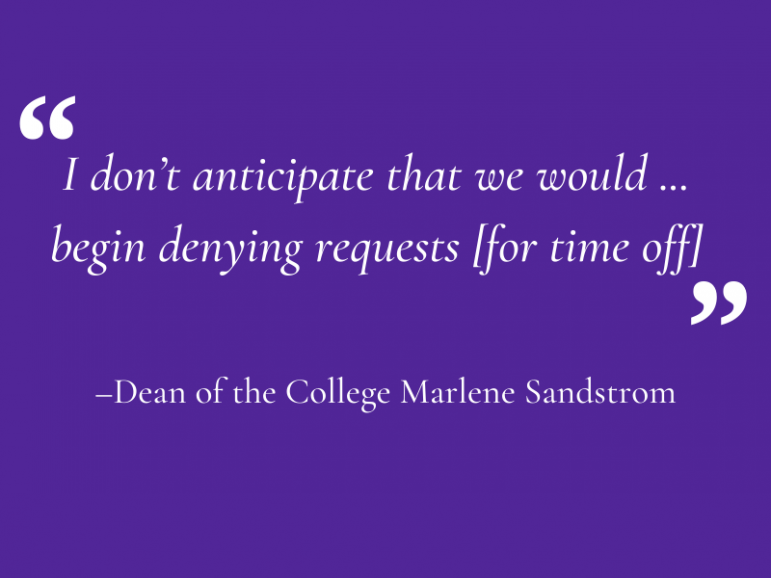 “But I thought I still had the fall semester at Williams to look forward to,” she told the Record.

Now, with the College considering holding fall classes online, even Shen’s eagerly awaited first-year fall is in limbo. President Maud S. Mandel will announce the plan for the fall by July 1; for now, as Mandel said on a phone call with families, “It’s fair to say we don’t know yet what we’re going to do in the fall.” If the College announces that the fall semester will be conducted remotely, Shen “would definitely take a gap year,” though she noted that she doesn’t have enough information to make a final decision now.

‘I would prefer to withdraw from the semester completely’

Shen would not be alone in electing to take time off rather than sign up for an online semester. Forty-three percent of the 93 surveyed rising first-years in the Class of 2024 Facebook group said they would likely take a gap year if classes remained online in the fall. Only 4 percent still plan to take a gap year even if the campus is open in the fall. Additionally, of the 284 current non-senior students whom the Record surveyed, 68 percent would “seriously consider” taking the fall semester off if it were held remotely.

“One of the things that I want the College to know in its decision for the fall is that none of us came to college for the boiled-down academic experience that is offered through online learning,” Reed Putnam ’23 wrote in the Record survey. “Truthfully, I believe if the College cannot offer a complete undergraduate experience (and I completely understand it might not be able to), then I would prefer to withdraw from the semester completely.”

For some students, a remote semester would be not only unsatisfying but also financially infeasible. If fall classes are virtual, Joseph Grillo ’24 will take a gap year in order to support himself.

“I’m leaving the safety and security of a federal job, with the United States Marine Corps, in order to pursue my education at Williams,” he wrote in the Record survey. “If classes were to be entirely held online, I wouldn’t have a place to live. I would need to find employment and honestly don’t know where I would go. This is a terrifying possibility, and I hope that it does not become reality.”

Despite the challenges that a greatly decreased enrollment would pose, administrators said the College will not prevent students from taking gap years or leaves of absence.

“Historically, the College has been very flexible in terms of granting gap years (for incoming students) and personal leaves (for currently enrolled students),” Dean of the College Marlene Sandstrom wrote to the Record in an email. “I don’t anticipate that we would change this approach and begin denying requests.”

Dean of Admission and Financial Aid Liz Creighton ’01 confirmed that the College will not deny gap year requests. “If students request a gap year, they can have every expectation that the request will be approved,” she said.

Typically, 20-25 out of roughly 550 incoming students take gap years, according to Creighton. If 43 percent were to take gap years, over 200 slots in the Class of 2025 would be filled by students admitted this year, which could significantly affect next year’s admissions.

“There are so many variables that impact our modeling for an admitted class, including gap year requests,” Creighton wrote to the Record. “Surely, if a large number of students admitted to the Class of 2024 opt to take a gap year, we’ll have to factor that into our model for the Class of 2025, but there’s no doubt we’ll have the opportunity to admit many, many terrific applicants next year.”

Of course, since 43 percent of surveyed rising first-years said they would likely take gap years in the event of a remote fall, that leaves 57 percent who plan to enroll regardless. Among them is Ava Earthman ’24.

“I went to a tiny high school in a tiny town and the last four years of schooling have been a breeze for me,” she wrote to the Record. “For most of my life, I have been looking forward to being academically challenged in college and I will not let virtual classes get in the way of that. It’ll definitely be difficult and I’d much rather be on campus, but if classes are online, I’m willing to take on that challenge. I don’t have a year to waste.”

One factor that could limit the number of rising first-years, relative to current students, who would take time off is that incoming students cannot take gap semesters, only gap years. In contrast, rising sophomores, juniors and seniors may take anywhere between one semester and three years off, according to Sandstrom.

The deadlines to apply for leaves of absence and gap years will come after Mandel announces what the fall will look like, allowing students to make more informed decisions. The gap year deadline is now June 15 but will be moved to roughly a week after Mandel’s announcement, according to the website for admitted students.

In typical years, there is no deadline for current students to request leaves of absence, but Sandstrom said the College is likely to implement one this year to “plan appropriately for housing, course registration, and other fundamental processes.” She stressed that this deadline is for students who decide that they do not intend to enroll for the fall at all; as always, students will be able to take leaves in the middle of the semester.

Fewer students enrolled would mean a diminished revenue, straining the College’s finances. But the College is better prepared to withstand the financial hit than some of its peers in higher education. Its endowment is large — over $2.8 billion in 2019 — so it relies less heavily on revenue from students, which includes tuition, room, board and other fees. In the 2018-19 academic year, only 33 percent of its $238 million annual budget came from students. Most of the rest came from the endowment and annual giving.

On the April 27 phone call with families, Provost Dukes Love asserted that the College would be able to survive a decrease in enrollment. He pointed to the spending reductions the College has already made and the strength of the endowment.

“Will Williams be able to sustain itself financially?” he said. “Yes… Yes, with some pain, and with a lot of current work in Williams College finances.”