The Williams Record • May 6, 2020 • https://williamsrecord.com/290240/features/ephs-in-congress-provide-window-into-national-leadership-during-pandemic/

Ephs in Congress provide window into national leadership during pandemic 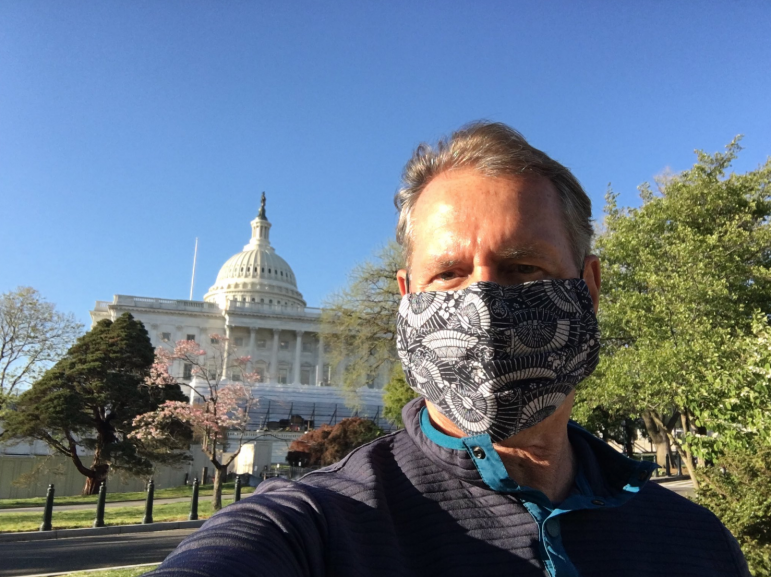 Rep. Ed Case (D-HI) returned to Washington on a red-eye flight in the middle of the congressional recess to vote for a $484 billion coronavirus relief package. Photo courtesy of @RepEdCase.

Congress has been mostly out of session since passing a $2.2 trillion coronavirus relief package in late March, but members of Congress have been busy responding to the pandemic from their homes throughout the recess. Among these are four alumni of the College — Sen. Chris Murphy ’96 (D-CT), Rep. Don Beyer ’72 (D-VA), Rep. Andy Levin ’83 (D-MI) and Rep. Ed Case ’75 (D-HI).

Their efforts at constituent service, major domestic policy-making and preparation for the post-COVID-19 world have provided a rare snapshot of what crisis leadership looks like for legislators.

Of the four, Murphy has maintained the highest profile. His signature issue has become a proposal to federalize the medical supply chain in order to help front-line health care workers. He introduced an early version of the proposal that would force U.S. President Donald Trump to invoke the Defense Production Act in late March as cases were rising rapidly in the New York metropolitan area and states were competing for critical medical supplies.

On April 29, Murphy introduced an updated version that has won the support of 46 Senate Democrats and leading unions. He is arguing that the legislation, which would boost the manufacturing of testing components in addition to personal protective equipment, is necessary in order to safely reopen the country.

“In Connecticut, we could be doing a lot more tests,” Murphy told his social media followers on a recent COVID-19 update video. “The reason we aren’t is because we just aren’t making enough of the components, and the president, for whatever reason, refuses to require manufacturers to make the components of tests that would allow us to reopen our state. It’s just unconscionable negligence.”

Beyer, a former small business owner who represents a district in northern Virginia, is also emphasizing an increase in testing. He believes that testing, as well as monitoring and contact tracing, is necessary in order for state and local governments to begin loosening restrictions on the economy.

“I’ve talked with as many top economists as I can about the next steps,” Beyer wrote on Twitter. “They agree that the most important economic measure we can take is stopping the virus’ spread.”

To that end, Levin, a first-term congressman who represents a district in suburban Detroit, has partnered with Massachusetts Senator Elizabeth Warren on a plan for nationwide contact tracing. The plan would authorize the Labor Department to help unemployed workers find jobs as part of a Coronavirus Containment Corps, modeled after the Civilian Conservation Corps that operated during the Great Depression.

“To defeat a virus that can jump from state to state with a plane or car ride, we need a national plan,” Levin told NBC News on April 23.

In the meantime, both Beyer and Levin have sought to ensure benefits and protections for workers affected by the crisis.

Beyer has advocated basing the flow of unemployment benefits on public health indicators, a proposal which would guarantee assistance for the duration of the pandemic. He teamed up with two senators to release a legislative framework yesterday.

In his role on the Joint Economic Committee, Beyer also criticized existing unemployment systems for being difficult to access. “It is easier to find toilet paper than it is to file for unemployment,” he said in a public statement on April 16.

A former union organizer, Levin has notably slammed the Trump administration for suspending union elections during the pandemic. “Now more than ever, workers need the freedom to form unions to help ensure good-paying jobs with safe working conditions,” he tweeted on April 30.

He has praised autoworkers who have been manufacturing critical medical supplies “in the tradition of the Arsenal of Democracy” and dedicated his March 27 vote on the $2.2 trillion coronavirus relief package to essential workers.

Case, a newly elected congressman who previously represented a different district in Hawaii from 2002 to 2007, has focused on securing funds from the relief package for small businesses, airports, transit systems and rural healthcare providers in his island state.

He touted 11,553 loans totaling over $2 billion for Hawaii small businesses on April 20, and returned to Washington with the rest of his colleagues the next day to vote in favor of a fourth coronavirus relief bill on April 23 that would add $484 billion nationally for small businesses, hospitals and testing. (The first and second COVID-19 response measures, passed in early- to mid-March, appropriated $8.3 billion and $192 billion, respectively.)

The Hawaii congressman documented his journey with a masked selfie and photos of empty airports along the way. “Surreal redeye across the country back to Capitol Hill to vote for critical fourth emergency assistance measure,” he captioned in a post on Twitter.

If Case had one of the longest trips back to Washington for the emergency vote, Beyer had one of the shortest. A week and a half before, the northern Virginia congressman commuted to gavel in a pro forma session of the House, a procedural tactic employed during long recesses to prevent a president from pushing through controversial appointments.

Rep. Andy Levin (D-MI) drove 32 hours and 1,100 miles round trip from his home in Michigan to vote for the $2.2 trillion coronavirus relief package in late March. Photo courtesy of @Andy_Levin.

Despite the temporary use of pro forma sessions, Beyer warned early on that fixes to the $2.2 trillion coronavirus relief package, particularly the Paycheck Protection Program for small businesses, were necessary. He predicted on April 2, “Without a clear application process and strong directives from the federal government, the Paycheck Protection Program launch tomorrow will descend into chaos and bedlam.”

He wrote to Treasury Secretary Steve Mnuchin in the following days, assembled a bipartisan coalition with more than 50 Democrats and more than 50 Republicans in support of new legislation and eventually spoke on the floor of the House of the “urgent” need for a fourth package. The vote on the fourth package was the one that brought his colleague Case back to Washington.

While Beyer was key in the latest round of coronavirus relief in the House, Murphy has mobilized bipartisan coalitions on special education rights and foreign policy in the Senate.

On April 29, Murphy commended the federal Education Department for committing to preserve special education laws, rather than allowing school districts to waive their responsibilities to students with disabilities. He said the decision came after he led a bipartisan coalition with Senator Bill Cassidy (R-LA) to oppose the rollback behind closed doors. He originally drew attention to the issue of students with disabilities with a Twitter thread earlier in the month.

“The crisis is so quiet that few Americans know it exists,” he wrote in a widely-shared post.

A leading voice on foreign policy, Murphy has also waded into preliminary efforts to rebuild international institutions and reorient strategic priorities in anticipation of “the next virus.” With Senator Mitt Romney (R-UT), Murphy is pushing legislation to reestablish a federal pandemic prevention council. Trump disbanded the previous office in 2018.

Murphy also criticized on social media the president’s decision to halt funding for the World Health Organization as “one of the most reckless, dangerous things Trump has done.” While he said he too worries about the influence of an authoritarian regime like China on the body, he argued that withdrawing American support “literally creates the problem that we are trying to solve.”

The moves are all part of a broader vision for American foreign policy after COVID-19 that responds to a changing world — “the Chris Murphy doctrine,” in the words of an April 16 Vox feature on the rising star.

While Murphy and his three colleagues continue to serve their constituents, respond to the public health crisis and ask the big questions about what comes next, the Connecticut Senator reflected in a March 31 update video that his daily challenges were not so different than many other Americans.

“I am one of the few young parents in the United States Senate and so that gives me a unique perspective on a number of issues that we deal with, not the least of which is the difficulty of working a full-time job from home and trying to homeschool,” he said.