One in Two Thousand: Will McCormick ’23 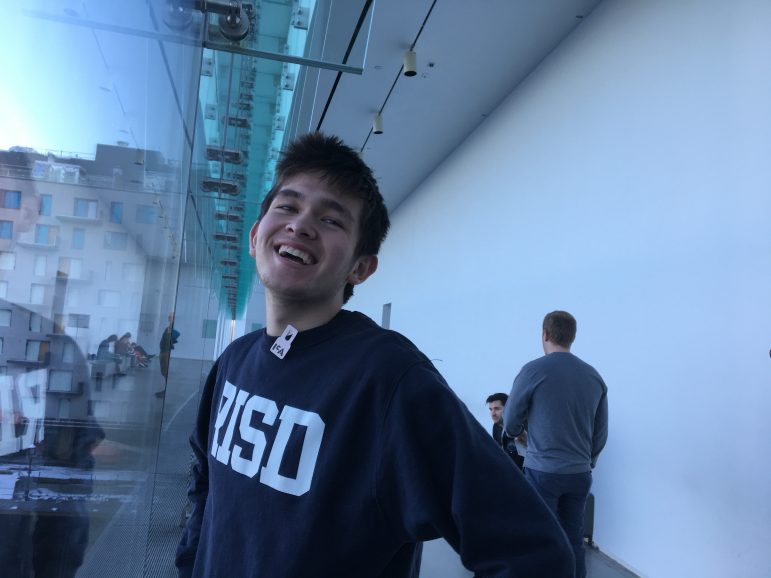 (Photo courtesy of Will McCormick.)

We randomly select unixes from a list of all current students at the College for our weekly One in Two Thousand. So long as the owner of a selected unix is willing to be interviewed and not a member of the Record board, that person becomes the subject of our interview. For this week, the computer (using a script in R) chose Will McCormick ’23, who is at home in Brookline, Mass.

What are things like in Brookline right now? What are you up to?

I’m doing nothing. It’s definitely hard because it feels really disconnected from everything being in [my] house in isolation. I’m in the town I grew up in but … I feel like I’m in my house but the house isn’t attached to the town because I can’t do anything in the town. But otherwise, it’s nice to be home and running, because I know all the trails. I’m used to running in the city, so it’s really nice to be running on pavement again instead of up a mountain or in the forest. This time has given me a lot more time to practice music because I don’t have anyone to hang out with except for myself. I’m an only child.

Have you picked up any new hobbies since the quarantine started?

I would say I’ve just really reaffirmed old hobbies that I’ve had. I think that’s what’s been most helpful about this time — it’s really let me realize what I really like to do. I’ve started to sew again, which is good so I can make stuff again, which I wanted to do on campus because I didn’t bring enough pants. I was gonna make pants on campus but we ran out of time. I’ve started playing piano more again. I’m pretty lazy, so I don’t really like picking up new things.

I know that music is something that’s super important to you, and you’re planning on being a music major. Tell me a bit about that.

I don’t know what my major’s gonna be, honestly, but I would like to! I have to keep going. I’ve only taken two music classes so far but I’ve really enjoyed them. Music at Williams has been really interesting because before college, I didn’t really realize I wanted to go into music, even though it’s something that I always did. In high school, I was in orchestra and advanced chamber choir. I kind of just did them without thinking about it, but I never really realized how much I enjoyed it. I played violin in high school. But what really got me into music was my a cappella group, weirdly enough, in high school. I joined my acapella group senior year and arranged a bunch of songs and realized I really liked doing that. That’s why I decided to take Music 103. I loved my a cappella group, and I love my acapella group [GQ] now. I think it’s my favorite thing on campus right now.

I know from our time in Music 103 and 104 that you not only sing, but you also play the viola. What’s it like being a part of an acapella group, like you talked about, and also being in an instrumental group on campus?

I also did choir, not to brag. You might have seen me for the one concert that I did. [Laughs.] It’s been interesting, I would say. I would definitely say that I’ve learned a lot about the two from each other, which I didn’t think would be possible because they’re so different — singing and playing the viola. I think the hardest part for me that I didn’t think about going into it is the self-consciousness as a person who plays music… I’m ambivalent about a lot of things, but with this I’ve realized, especially with viola, because there are so many strong strings-people here in the music department, I feel so self-conscious playing viola all the time. But the thing I’ve learned is that you eventually have to not care about what other people think because then you’re not going to grow. I was in iO, the chamber concert in the winter, and that was really fun. But the first time I actually played an integral role in something was in the pit band for A Little Night Music, which was a big experience for me. I’ve never been in a production like that. I played violin II. I was the only violin II — I wasn’t in a section with other people. When I first joined, I was like, ‘I can’t do this.’ After my first practice, I was just freaking out, and I was like “Oh, this sucks.” But with the help of Jake [Eisner ’21, the musical director] and Polly Ellman [’22], the first violin for pit band, I was like, OK, I can do this. I think it was so amazing, the experience of playing in the pit band, because … it was my first time doing something of that caliber, and it was a really cool experience. It definitely helped me develop more confidence in playing, and I really wouldn’t have done that without the help of the older people in the group.

That seems like a really meaningful time for you. So, besides our harmonizing to chorales in the AP3 bathroom —

[Laughs.] What do you miss the most about campus right now?

The first thing that comes to mind is Snar, because I just miss Snar. Fried green beans, which I did not think I would like before coming to Williams — honestly I miss that so much. What I miss the most is just the availability to do things spontaneously. I hate planning things. I miss the spontaneity you can have by going to events at Williams or just going down the hall to see a friend or going to the bathroom and talking to someone.

What experiences from your freshman year do you think you’re going to take the most away from?

There’s so much I could say. I would say confidence would be a big thing. I think a lot of people at Williams can relate to this, but in high school, for example, I was really good at running and then I sucked when I came here. In high school, I really knew what I liked to do and I knew my niche and I knew how to fill it, which I think is what got me so far. I was in alternative education for most of high school, which I really loved, and in that, I knew my niche. It was humanities-heavy, and in terms of English, I knew exactly how I liked to write and my writing style, and I felt really secure in that. In terms of what I did within our alternative education community, which was only 120 people, I felt really confident because I knew my place within the group.

And then going to Williams … everyone thinks they’re gonna kill it right away, and I thought that too, being super vain. But going off of that, I think I was in this mindset where, if I suck at one thing, then I suck at everything, which is really hard to dig yourself into. I think my identity was shook when I entered Williams because none of the things that I held true to myself in high school were apparent now. But now, looking back on it, because everyone is so amazing at what they do here, it’s so hard to be like, I suck at everything, I should just give up on everything. But the thing I’ve learned the most from is that if you suck at one thing, it’s OK, and you can acknowledge that you suck, but you can’t be defeatist about it. There are little things that I am good at, and that’s OK.