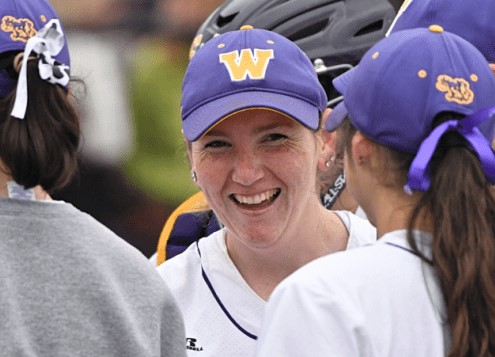 Kirstin Mapes ’21, formerly a member of the Class of 2020, will return for the Ephs next year after withdrawing from the remainder of her classes this spring. (Photo courtesy of Williams Sports Information.)

Ever since she was a little kid, Kirstin Mapes ’21 had dreamed of becoming an All-American in softball.

“That was something, constantly, I thought about, all the time,” said Mapes, a two-way player for the Ephs. “And this was the year I was like, ‘I’m going to do it.’”

As a second-semester senior, she worked hard as she prepared for her final season. She felt well-positioned for success on a close-knit team that had fallen just short at the Women’s College World Series last May. The first-years had bought into the program quickly, and she hoped the team would reap the benefits of a strong culture en route to a first national championship before she graduated in June.

Like it did for many others, the COVID-19 pandemic changed her plans. Yet, determined to get back on the field and chase her dreams, Mapes has decided to withdraw from the remainder of her classes and re-enroll next spring. Her yearlong leave of absence will allow the pitcher and utility player to play a full senior season in the Purple Valley.

Coach Kris Herman said she was not surprised that Mapes elected to return. “Simply having the drive within her to make such a big decision shows her love for the sport, for competition and for teams,” Herman said.

Mapes, who hopes to become a softball coach one day, said she had started to worry that the pandemic would take away the 2020 season when Amherst announced the end of in-person classes on March 9. But after President of the College Maud S. Mandel announced the College’s move to remote learning on the morning of March 11, it became a certainty.

When she received Mandel’s email, Mapes was in Goodrich Coffee Bar with one of her senior teammates.

The teammates drove down to Cole Field and sat on the grass for a while before driving back to Herman’s office, where the entire team had spontaneously gathered.

Soon after, Mapes began to consider the option of withdrawing, especially after the NCAA extended the eligibility of spring athletes affected by the pandemic on March 13. She had already completed her major requirements for political science in the fall but, while she liked to joke that she was “majoring in softball” in the spring, she had looked forward to taking interesting electives in her last semester.

“The culture of Williams and having that last Williams semester was something that really mattered to me, and I was willing to sacrifice and give up a year just to have that,” she said.

But before she made her decision, Mapes vowed to talk to the people most affected: her coach and her teammates from the Class of 2020 and the Class of 2021. She knew that her move would affect many others and worried in particular about taking attention away from the rising seniors. Most of all, she sought out members of her class, all of whom already had set post-graduation plans. She said their support solidified her decision.

“From a team perspective, the conversations she had say a lot about Kirstin and just as much about her teammates and our program,” Herman said. “The idea that others’ opinions really, really matter is one of trust, communication and respect — three hallmarks of good relationships of any kind.”

Mapes officially withdrew on March 17. Now at her home in southern California, she said she is meeting with her coach every Monday morning over Zoom, spending time reflecting on the kind of player and person she would like to be.

“It’s work that we kind of do as a team throughout the year, but it’s taking a much deeper approach to it, which has been very cool and kind of eye-opening,” she said. “Honestly, there’s no better time to be doing it.”

According to Mapes, the softball team tries to adhere to four core values: communication, enthusiasm, consistency and love. The team updated the values at the beginning of season to better reflect their closeness as a group and, inspired by that process, Mapes is now developing her own personal set.

“At the moment, mine is competitive, connection and passion,” she said before reflecting on her choices. “A lot of that comes from what I learned at Williams because I’ve really never played with a group of girls that just so know so much and care so much about team culture and the connection that we make between each other.”

Like many seniors, her plans for the fall are uncertain, and she said she still sometimes has doubts about her decision to withdraw for a year. For most of her life, she had approached college with a “four years and out” mentality, but her withdrawal will extend her undergraduate career to five years.

“To me, sometimes, it feels like I’m letting myself down by taking an extra year and not having the normal college path,” she said.

She also expressed worry that the year off could change her as a player. After all, by the time she returns for her final season, it will have been almost two years since her last intercollegiate game.

Still, she said she feels that withdrawing was the right choice for her.

“I think if I didn’t, a large part of me would be left behind,” she said. “I would always be sitting there wondering, ‘Well, what if I had done this?’”

Herman said she is “honored” that Mapes ultimately chose to come back and is excited for the senior to continue her journey of self-discovery, on and off the field. She said their Zoom sessions would pay off, whether or not Mapes ultimately pursues a career in coaching.

“It’s been fun working with her on what really matters to her, and how she lives those values day by day,” Herman said. “It’s something that is impactful in coaching and for all of us.”

Her teammates are also happy to have Mapes back as they look to build their program and return to the Women’s College World Series. Azaria Vargas ’22 described Mapes as “one of the greatest” teammates she has played with in her entire softball career.

“Mapes is such an integral part of our team and someone who makes everyone feel immediately welcomed the moment they step onto campus,” she said. “I know that I’m excited to have her for another season, as is the rest of the team.”