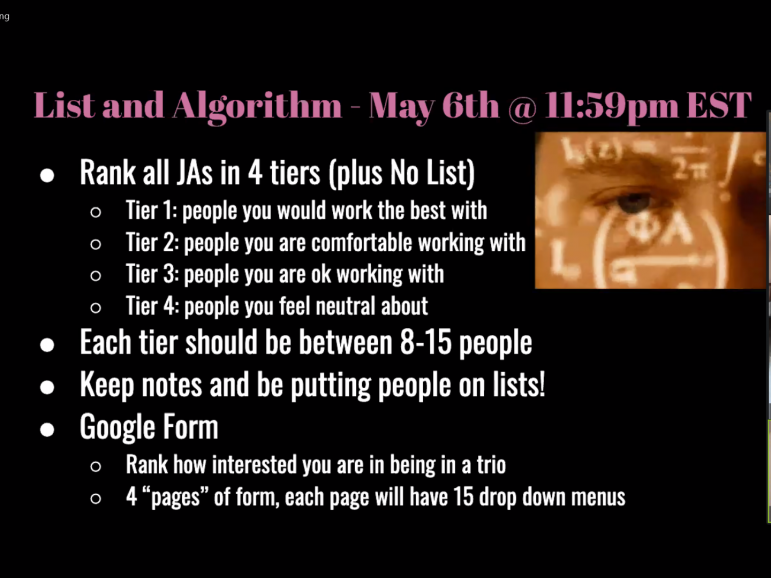 On Sunday, JAAB hosted a webinar where they discussed the algorithm used to create JA co-groups.(Nigel Jaffe/The Williams Record)

At this point in the school year, Junior Advisors (JAs) to the next year’s freshman class would typically be in the midst of JA excursions, or “dates,” with the goal of determining who they want to work with in a co-group next year. JA dates usually entail meeting up with a group of three to six JAs and doing an activity on campus together. However, due to most students being off campus as a result of COVID-19, these excursions look very different this year.

For the past few weeks, the JAs to the class of 2024 have been spending hours every week on one-on-one video-calls with each of the other 53 JAs in their class. The decision to move from group excursions to one-on-one calls was quickly made by the Junior Advisor Advisory Board (JAAB) when the College closed campus for the rest of the spring semester.

“We convened an emergency meeting the week where everything got cancelled to figure out how to retool everything,” JAAB co-president Surabhi Iyer ’21 said. “So, as a group, we came up with the idea of one-on-one video-calls… With one-on-one conversations it’s a better chance to get to know someone and see how your working styles might go with each other within a co-group.”

Many JAs plan their numerous video-calls by blocking out 30-minute slots on Google Calendar and then scheduling calls over FaceTime, Zoom or Google Hangouts. JAAB created a list of suggested questions for JAs to ask each other, including, “Why did you want to be a JA?” and “What about being a JA are you most worried about?”

“I think the questions that JAAB put up are really helpful,” Caroline Case ’22 said. “My favorite one of those is, ‘What are you looking for in a co-group?’ and that allows people to talk about strengths or weaknesses that they have and other types of people they’d be most comfortable living with.”

But the calls don’t just have to focus on these questions. Some JAs came up with their own questions and goals for the calls. “One question that I ask and that someone else asked me is, ‘What do [you] think the point of the calls are?” Nick Servedio ’22 said. “It’s definitely interesting to hear what people have to say as to what they want to get out of the calls. For me, I want to get to know the person on the other end.”

Nicolle Mac Williams ’21.5 came up with her own go-to questions that she asks on her calls. “The first one is, “What role do you see alcohol playing in the entry?” she said. “I ask that one, just because a lot of questions that are asked tend to be, at least for me, very abstract… but the question about alcohol is very practical and very grounded in reality with what [being] a co with that person could look like. [The other one is] if a professor says, ‘Get into groups of four to do a presentation,’ then what role do you get into and how do you approach the situation?”

Though the thought of one-on-one video-calls with 53 other people, some of whom you may have never met, can be daunting at first, Iyer said that the feedback so far has been positive. “We sent out a form last week that was kind of like a mid-excursions check-in just to see how [the JAs] have been doing in general, but also with excursions,” she said. “So far we’ve heard positive things. The impression that I’m getting is that it’s helped people get to know each other, and maybe it was less awkward than it seemed.”

Mac Williams, who is off cycle, said she was nervous at first. “I took a semester off after my freshman year, so I can be a JA essentially just because I’m a junior this semester and a junior next semester,” she said. “I didn’t really know many of the sophomores that are going to be juniors [for] this JA class, so I was really nervous at first, but everybody’s been so nice, warm and welcoming.”

Even so, having to repeat this process over and over again can be exhausting. “The past week I have been feeling a little bit burnt out from the calls, just because I’ve done almost 40 by now,” Servedio said. “Often it feels like a lot of the calls are very similar if you don’t make an effort to spice up the questions that you ask or vary the calls in other ways.”

Additionally, because these are remote video-calls instead of in-person excursions, part of the traditional experience is inevitably unavailable. “A lot of situations that you’re in as a JA feel very circumstantial, sort of, and I think being able to interact with other JAs in person would give me a better sense of how they would respond in certain situations or give me a better sense of situations I might be in with them,” Servedio said.

JAAB member Jason Mazique ’21, who serves on the Excursions Committee, said that the in-person group dates were his favorite part of JA training before he was a JA and agrees that something does get lost in the new format. “One of the worries that preoccupied me most with the excursions going online is that you lose that ability to understand how you would problem-solve with another individual on top of how you would work in an in-person group setting,” he said. “Obviously, that’s not something we can mend given the circumstances, but I think that it’s a critical part of the JA role and hopefully … in the fall that’s something that we can really stress.”

But Mazique, who also served on the Selection Committee, said he has faith that the rising JA class will thrive despite this shortcoming. “I helped choose this cohort of JAs, and I am extremely confident that they can step up to the challenge … in the fall,” he said. “I’m very grateful that I got to be a part of that process.”

The co selection process for JAs is happening normally this year, and the JAs to the class of 2024 will find out who they will be in co-groups with by mid-May. Iyer said that JAAB will do a presentation over Zoom to show the JAs their co-groups and how the groups were decided.

The entry system will also resemble the same model that was in place this school year, with four JAs per entry, except AP1 and MD1, which will each have three.

JAAB is currently deliberating on how to change the format of spring training so that it can be done remotely. “We do a lot of our work in committees, so the training committees come up with a couple of good ideas of how to make spring training feasible over Zoom because really the purpose of spring training is to bond with your cos and get that strong relationship going,” Iyer said. “Spring training is a lot more about group dynamics, so we’re trying to figure out how to get that done virtually.” JAAB is also currently creating contingency plans for the fall semester.

Some JAs expressed their worries due to the unforeseeable future of the COVID-19 pandemic and how students currently being off-campus could affect the fall semester. “I don’t know how [COVID-19] is going to affect campus life once we get back on campus,” Case said. “I’m nervous that … people will be trying to make up for lost time and have a bigger party culture than normal and I don’t know how that’s gonna effect the entry attitude towards partying … or how the frosh perceive Williams once they get on campus.”

Mac Williams expressed similar concerns. “I feel like people are gonna be ready to party and be crazy and chaotic, which I totally understand, but I’m worried about how so many freshmen will not have had experiences with alcohol,” she said. “So just trying to create a safe space that people feel comfortable in to develop healthy habits [is important].”

Despite her concerns, Mac Williams said she is looking forward to her JA experience once students can go back. “There’s so, so much I’m looking forward to in being a JA,” she said. “A lot of it is like the little stuff. You know … going into the common room and being like, ‘Hey, I’m hungry, does anyone wanna go to Mission with me,’ … and people sort of organically come together and go do an activity. Also, I’m pumped to see the friendships start to form as people start to get more comfortable with each other.”

Servedio said he is also looking forward to working with the other JAs in person. “I think a large part is getting to know the other JAs, not just the frosh, and of course becoming good friends with my frosh and helping them out,” he said. “But I also just really want to make the entry a fun atmosphere and a place where people can feel welcome and included, but also have a really good time and a great freshman year.”