Worried about traveling home, some students remain in off-campus housing in Williamstown 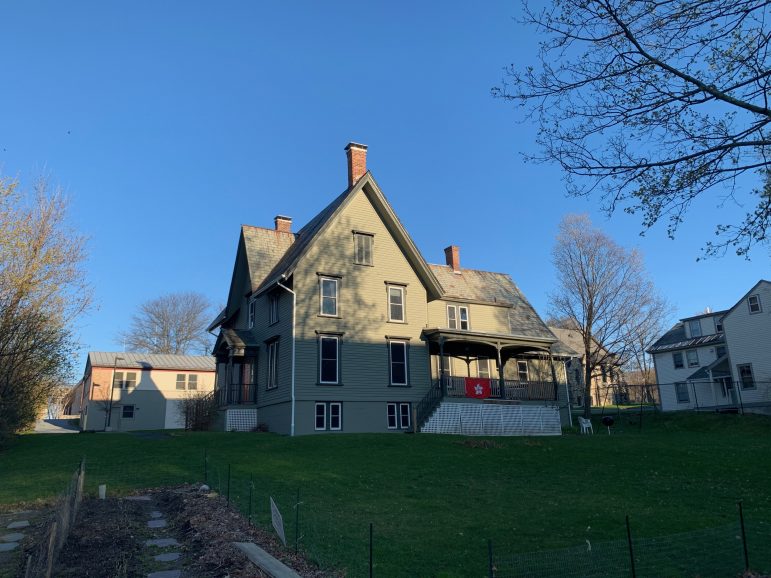 Aanya Kapur '20, who is staying in the Rectory, decided to find a place to stay off-campus after campus closure rather than risk returning home to Australia. She had petitioned to stay on campus but was denied and decided not to appeal. (Photo by Kevin Yang/The Williams Record.)

Aanya Kapur ’20, who is staying in the Rectory, decided to find a place to stay off-campus after campus closure rather than risk returning home to Australia. She had petitioned to stay on campus but was denied and decided not to appeal. (Photo by Kevin Yang/The Williams Record.)

Aanya Kapur ’20 lived in Horn Hall before COVID-19 began causing school closures. When the College shut down, she worried she would not be able to return home because her parents live in Australia, whose borders had closed. Her petition to stay on campus was denied, and she did not have much time to find an alternative place to live.

Kapur was not alone. Out of the 350 petitions to remain in on-campus housing, around 200 were denied. Some of those 200 students found places to stay in local off-campus housing due to concerns about returning home.

“There was definitely an appeal process that I could have gone through, and who knows what would have happened with that,” Kapur said, “but I was worried about finding another option in case the appeal process didn’t work in my favor. I didn’t want to risk losing something else.”

Luckily for her, the Rectory had rooms for rent.

“I found out [that my petition was denied] on Saturday, and I started searching immediately for the sublet,” she said. “It was sort of stressful because I didn’t have confirmation from the landlord until that Tuesday, [when] I had to leave the dorms, so there wasn’t really much set in stone until the very [end].”

Kapur was eventually able to find a sublet by contacting a senior who was moving out of her residence in the Rectory. “I was lucky to have [found her] because otherwise I probably wouldn’t have found that out myself,” she said, “So I contacted her, and she was very willing to help me out.”

In the days following the announcement that campus would close, Michael Nettesheim ’20 and other off-campus residents sought to relieve the pressure on students whose petitions were denied. “[We] had reached out to friends and acquaintances on behalf of our previous housemates to find subletters for them, because [the subletters] were going home and would rather not pay if they could avoid it,” he said.

Nettesheim had decided to stay in the Rectory rather than return home to California.

“I decided to stay because leaving felt hectic, and I had the luxury (because I already lived off campus) of staying exactly where I was,” he wrote in an email to the Record. “Certain family dynamics meant I would rather not be stuck at home in California.”

The College community was also an important factor in his decision to stay. “One of my other housemates was going to stay, and we knew we would have [four] other people moving in with us,” he said.

Like Nettesheim, Andrew Rim ’20 was already living in a house on Haley Street, which he and some friends were renting from a professor on leave. He decided to stay on campus because he didn’t think traveling to South Korea, where his parents were living, would be a good idea.

“This past February, my parents had actually moved from our hometown of San Diego over to Korea,” he said. “They moved to Korea at a bit of a bad time, right when the hotspot of COVID actually hit Korea, so just for my own safety and their own safety, traveling seemed out of the question for me.

“I’m lucky enough and privileged enough to be able to have a home that I can stay in here at Williams, so I decided to just stay here for the rest of the year,” he added.

He said he is enjoying spending time with the friends who also decided to remain in the house, which they weren’t able to do earlier in the semester because of packed schedules. He plans on heading home on May 28.

“Particularly last semester, there were a lot of times where I in particular was out of the house and just using the house as a place to sleep,” he said. “I just wanted to, I guess, have some sort of closure as housemates together.” He also wanted to finish out the year on the East Coast, where tuning into classes would be easier, while keeping his parents safe.

Like Kapur, many other students whose housing petitions were denied found themselves in urgent need of a place to stay. Nettesheim estimated at least 40 undergraduate students are currently living in off-campus housing. The International Student Association formed a help group to assist students in finding residence by putting them into contact with seniors who were moving out of off-campus residence as well as with landlords in Pittsfield and North Adams.

Kapur and Nettesheim now live with three other seniors, one of whom also had problems travelling home, while the rest remained to complete their thesis. “I’d be going on walks once a day with my housemates while keeping social distancing from other people.” Kapur said. “I used to leave my dorm, and it would be difficult to get from one place to another without seeing someone that I know. But now it’s the opposite.”