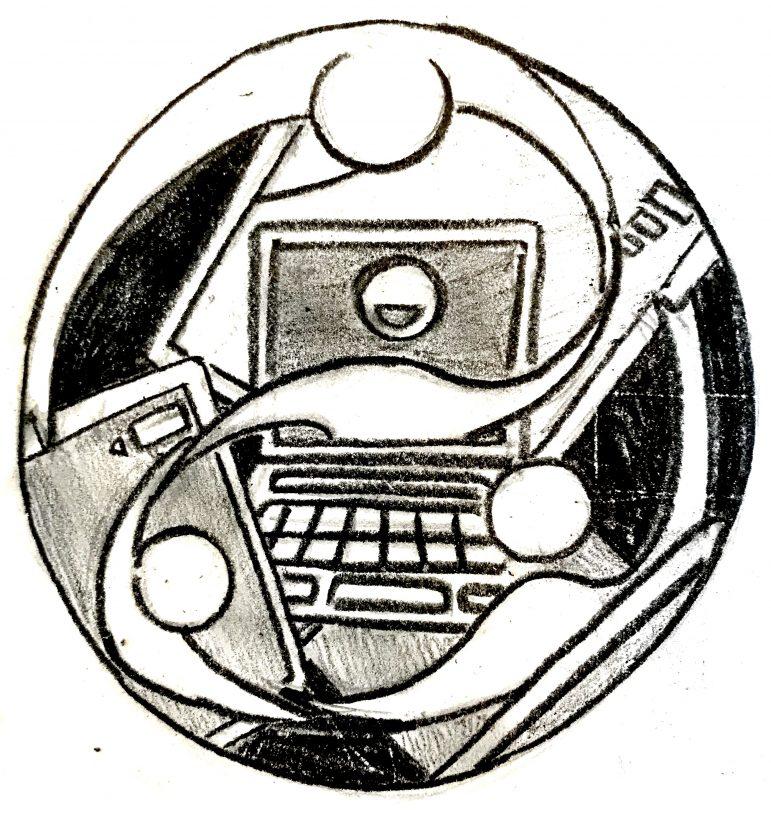 Storytime has continued to offer ways for community members to share stories, including through a weekly virtual event held on Zoom. (Drawing by Matthew Roychowdhury ’21.)

The Storytime talk given by Ariel Chu ’17 last Sunday was both the best-attended and quietest Storytime event I have seen.

The first-ever Virtual Storytime, conducted over Zoom, drew 111 participants. Listeners had muted themselves and turned their cameras off so as not to distract from Chu’s story, so when I watched the event in Zoom’s “gallery view,” I observed a grid of silent gray rectangles filled with usernames or professional headshots.

But once Chu finished, the screen filled with the clapping emoji, as listeners made use of Zoom’s “Reactions” feature. When cameras and microphones turned back on, virtual attendants complimented Chu on her story, chatted with old classmates and showed off their cats. I had never seen so many smiling faces on a Zoom call.

The weekly Zoom call is one of the ways that Storytime is continuing, different as it may look from the Sunday-night gatherings on the couches in upstairs Paresky or Dodd Living Room.

Emily Roach ’16, a self-described “Storytime superfan,” came up with the idea for Virtual Storytime in the weeks after her master’s program in school counseling was moved online amid the COVID-19 pandemic. She said that she felt her program had lost an important element — that of taking the time to listen to people.

“I don’t think it’s impossible to really be in the moment with someone and share their space and take their perspective, but I think you have to be intentional about it,” she said. “I was just thinking about how I loved the culture of storytelling at Williams … and I was just thinking that what I need right now, and what a lot of people need, is some of that spirit — that Storytime spirit — that we had at Williams.”

She texted Meg Richardson ’16, a friend who had been on Storyboard as a student, about holding a Storytime remotely. Richardson was enthusiastic about the idea, so the two started a Facebook group, which now has almost 700 members. After accepting storyteller nominations through an online form, Richardson and Roach decided to have Chu, who had been in similar friend groups to them while at Williams, be the first storyteller.

“The whole Storyboard motto is, ‘Everyone has a story,’ which I really, really believe — I think every person walking around could do an amazing Storytime,” Richardson said. “But I think we both saw Ariel on there and were like, ‘Oh, I would just love a story from her.’”

Students from Storyboard reached out to the pair, offering to help with the initiative. One of Storyboard’s main roles is to prep storytellers, which usually involves listening to a run-through and asking guiding questions if necessary. Chu did a short tech rehearsal with Richardson, Roach and Storyboard member Jeongyoon Han ’21 [Editor’s Note: Han is a managing editor of the Record and was not involved in the writing or editing of this article].

For the actual event, Roach and Richardson tried to retain as many of the traditions of in-person Storytime as can be preserved on a Zoom call. They held it at the typical time of Sunday at 9 p.m. EDT. Since baking cookies for attendees was impossible, Roach posted Chu’s favorite recipe for chocolate-chip cookies in the Facebook group so that people could make them at home. And instead of ringing a bell — the traditional way of opening Storytime when Richardson and Roach were students — Richardson played a bell sound from an app on her phone.

After the bell rang, Chu launched into her story about a decade-long internet friendship. She met a girl online when she was 13, and the pair stayed in contact for years, writing fiction in a chatroom together. The two drifted apart after they met in person while Chu was a first-year at the College, but reconnected in Chu’s senior year; in fact, the cookie recipe was what her friend made when she visited her after their reconciliation.

The relevance of a story about online relationships to the era of social distancing was not lost on Chu.

“When it comes to virtual friendship, I’ve had a lot of practice,” she said as she concluded the story.

Chu later said that she was “extremely nervous” while telling her story, especially given the lack of human response in real time. She kept Zoom minimized so she could focus on reading the script she had prepared.

Once she finished, though, her chat-box was flooded with compliments and questions, which she has saved for her personal records.

“The response was a little delayed, but it was there,” she said.

“Ariel told such a beautiful story,” Roach said. “And it was so relevant to a lot of the questions we’re grappling with and the questions that I was even asking myself when Meg and I wanted to get this going, like, ‘How can you be authentic in virtual relationships? What’s your quote-unquote “real life,” and what’s your online life?’”

Chu’s Storytime reached people in nine countries, according to Richardson. Many of the attendees were recent alums, but also in attendance were current students, Chu’s friends with no connection to the College and even one rising first-year — as well as Richardson’s boyfriend, on whose Zoom account the event was hosted.

“He did not go to Williams, but he’s now a fervent supporter of Williams Storytime,” Richardson said. “He loved it.”

What began as an alum-led initiative has grown to include current students as well. Now that Richardson and Roach are collaborating with Storyboard, Virtual Storytime has started to include student storytellers. For the next event, scheduled for 9 p.m. EDT on Sunday, April 26, Storyboard member Carmen Bango ’20 will be the storyteller.

For Sunday, May 3, Storyboard is working with the Muslim Student Union (MSU) on a Super Storytime on the topic of Ramadan, the Muslim holy month. Desel Pek Dorji ’23, who is helping to lead Storyboard’s involvement with the event, said that the MSU has already heard from some people who are interested in speaking but is still seeking nominations.

“Everyone, regardless of religion or faith, can talk about what Ramadan means to them!” reads the nomination form.

In addition to working on Virtual Storytime, Storyboard has been uploading podcasts to its website. The group has been reaching out to past storytellers and asking if they would be willing to have recordings of their Storytime talks featured on the podcast, Storyboard member Aagat Sapkota ’23 said. So far, Storyboard has released three episodes: recordings of old Storytimes delivered by Associate Professor of English Bernie Rhie and Landon Marchant ’20, and an update from Marchant about their life in the years since the Storytime.

“We’re fortunate enough that we can translate our work into a different platform,” Sapkota said. “It’s essentially the same work that we do, except it’s much more nuanced. And it’s a creative time, because we don’t know what works and what doesn’t, so we’re trying a lot of stuff out. It’s an exciting time to be on the board of Storytime.”