Column: What fans do when there are no sports to watch 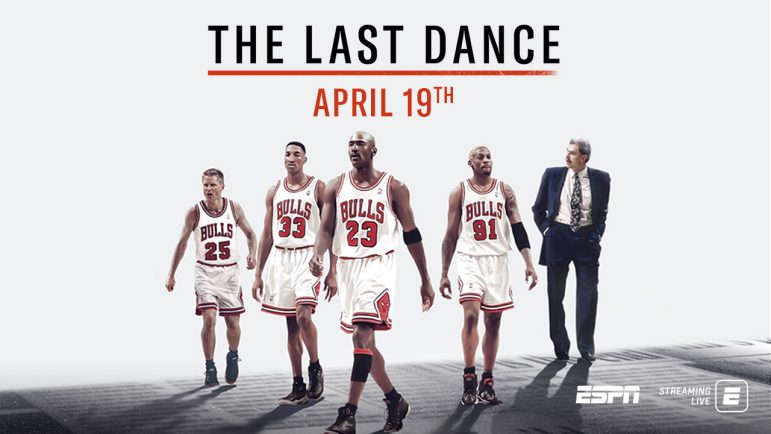 The Last Dance, ESPN’s 10-part documentary on Michael Jordan and the Chicago Bulls, premiered on Sunday night. The series is directed by Jason Hehir ’98. Photo courtesy of ESPN.

Every year, the College brings a new group of students, faculty and staff together, and the small campus in the northern Berkshires becomes a place for people from all across the country and all around the world to form lifelong relationships.

Students bond over classes, inspired by a professor to carry conversations outside the classroom or driven to work through problem sets in late-night study sessions. They make memories in dining halls and entries. They find common purpose in extracurriculars or on teams, under the leadership of a coach or advisor.

But in all the little moments between classes and activities, people start looking for other ways to connect. Some discover a love of the same music, or binge-watch a Netflix series together. Others share a hobby like cooking or like to discuss the latest news in politics.

For many, professional sports is at or near the top of the list of common topics.

In an era of remote education, Ephs join Zoom calls and Google Hangouts for check-ins and classes, showing — in the words of President Maud S. Mandel — that “Williams is more than a campus.” While music, Netflix and politics can continue as topics of conversation, professional sports, unfortunately, cannot.

What is usually a distraction from a stressful assignment or a difficult day has become a reminder that something is deeply wrong in the world. An instinctual check on a favorite website for nonexistent scores makes that immediately clear. Even changes in the weather otherwise associated with a beloved annual sporting event like March Madness or Opening Day evoke powerful feelings of nostalgia.

So, as ESPN airs esports and driveway H-O-R-S-E competitions, what are sports fans doing to pass the time? From conversations with some of the people I connected with at the College over basketball and baseball, football and soccer, a couple things became clear.

First of all, most seem to know that sports are not returning any time soon. While stories about so-called “bubble” plans to isolate players in a single city and resume play over the summer drive clicks for a day or two, they quickly fall apart under the slightest scrutiny. Players and coaches have families. Staff are needed, even without fans, to make events happen. Tests must never go to sports leagues before medical professionals and essential workers.

Second, the airing of esports on TV, while a nice step towards mainstreaming the genre, is attracting neither hardcore gamers nor traditional sports fans. Gamers continue to watch high-stakes competitions of League of Legends on established platforms like Twitch and YouTube rather than ESPN, which has bungled its broadcasts with ill-timed commercial breaks. Traditional sports fans might tune in to low-key tournaments of NBA 2K played by real-life NBA stars, but they are usually more interested in the banter between their favorite players than the actual gameplay.

Instead of diving into the world of esports or obsessing over the return of professional leagues in the future, sports fans are largely looking to the past. Old NBA Finals Game 7s have aired, including the 2009 decider between historic rivals the Los Angeles Lakers and the Boston Celtics, the fourth of five championships won by the late Kobe Bryant. MLB.com, meanwhile, made a bracket of the best individual seasons of all time. (The 1968 campaign of St. Louis Cardinals pitcher Bob Gibson ultimately won by popular choice over the 1923 performance of none other than Babe Ruth.)

Some of the broadcasts and brackets have undoubtedly been geared towards older people who might remember a spectacular game or season and want to relive a favorite memory. But even for younger people, the content has still been fun — full of surprises that further our interest in and deepen our love of a sport. Under trying circumstances, it has been a unique chance to see players that our older siblings or relatives rave about, or catch the end of a more recent matchup that finished in the wee hours of the night — well past an elementary-school bedtime.

It is also provided an opportunity to learn about social history through the eyes of some of the premier sports journalists in the country. One of my top recommendations is the Baseball 100, a loose ranking of the best baseball players of all time compiled by columnist Joe Posnanski for The Athletic. The series is supposedly the length of Herman Melville’s Moby Dick in total word count and artfully addresses the stain of institutional racism on any attempt to compare players across time.

(While the series is unfortunately behind a paywall, subscribers to The Athletic have five gift subscriptions to send to friends. If you are interested, shoot me an email!)

The most greatly anticipated longform production, however, has been ESPN’s 10-part Michael Jordan documentary that debuted on Sunday night, The Last Dance. Based on a treasure trove of never-before-seen footage, The Last Dance profiles the athlete and the team that defined the 1990s, featuring interviews with everyone from hardcourt rival Magic Johnson to former Chicago resident Barack Obama. Originally scheduled to air over the summer, the premiere was moved up last month after a social media campaign from fans to fill the gaping hole in sports programming left by the pandemic.

And if you weren’t on the edge of your seat already, the director who made that accelerated timeline possible, who spearheaded the effort to tell the story of a complicated figure like Jordan through sit-downs with Magic and Obama, is alumnus Jason Hehir ’98. More next week from the Record…

So although the NFL presses ahead with its offseason (Tom Brady to the Tampa Bay Buccaneers in free agency! NFL Draft on Thursday night!) and hopes remain for a standard regular season in the fall, sports fans have found ways to stay connected to what they love in the absence of new games, one retrospective article or re-broadcast at a time.