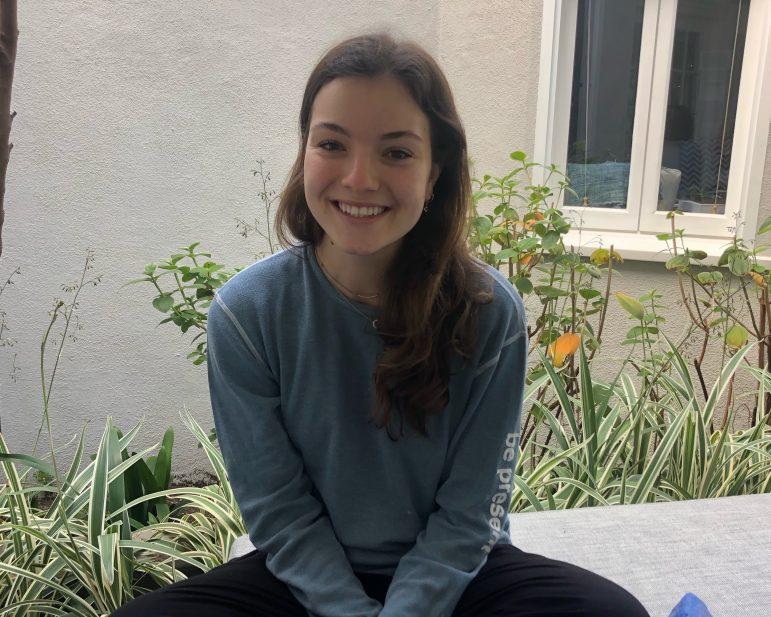 We randomly select unixes from a list of all current students at the College for our weekly One in Two Thousand. So long as the owner of a selected unix is willing to be interviewed and not a member of the Record board, that person becomes the subject of our interview. For this week, the computer (using a script in R) chose Olive White ’22.

SJ: How is quarantine going?

OW: Quarantine has been, I think, a lot different than I expected it to be. And I’ve been enjoying it for the most part. The first few weeks were especially enjoyable; I think it was a much-needed break. And by the time classes started again, I was ready to get back into it. I’m taking my dog on a ton of walks and trying to cook a lot, or maybe learn to cook is a better way to put it. [Laughs.] I’m always by my mom’s side in the kitchen trying to learn from her.

SJ: The other day my mother literally had to stand over me and coach me about how to cut raw chicken. And like, I’m 20 years old. I should definitely be able to do this without my mom.

OW: Yeah. It’s so funny how I think I’m OK at cooking, and then my mom asks me to do something and I have to have her give me directions. I have had to ask a lot about chopping different kinds of vegetables. [Laughs.] Like, I’ve never really chopped broccoli before. And the other night she asked me to do it and I have no clue what the right way to cut broccoli is. But yeah, stuff like that. It’s been fun. I’m learning a lot. I’ve been doing some things just for, you know, something different. I think it’s easy to get stuck thinking about how weird everything is right now, and I definitely have had some … sad hours thinking about it all. But I’m trying to make the most of it.

SJ: What kind of dog do you have?

OW: I have two dogs. We rescued both of them, so we’re not really sure what types they are. One is Chica, this teeny-tiny little white thing. She’s super old, and I guess the best way to describe her is that she looks like Yoda — like a white and furry Yoda. [Laughs.] And then my other dog, Kona, is partly like a herding dog. He’s kind of shaggy and medium-sized.

OW: Yeah, they’re great. My little old one doesn’t walk, so we have to carry her when we go on walks because if we put her on the sidewalk, she’ll just sit down. But Kona, the big one, is into walks. He can walk for miles. So I’ve been trying to do that with him a lot.

SJ: You mentioned that you’ve been doing some art while you’ve been home. What does that entail?

OW: My mom and sister and I like to just sit outside and do art together when we have free time. We have cumquat trees at my house and they were just at their harvest peak.

SJ: I’m not even sure what a cumquat is.

OW: It’s like a little orange. It’s orange, and the skin is really sweet, but the inside is super sour. A lot of people love them and a lot of people hate them. I love them. I could eat handfuls. We have those trees in my house, and my first little painting was of those. I also hadn’t painted in a while, so I painted a peach. I’m enjoying painting fruit because I feel like it is a good starting point. Oh, and we have these sculptures that we made over the summer, just like clay sculptures. We made them and then had a friend fire them for us because she had like a kiln. So we got those back and painted them. That was really fun also because I’d never done that before.

SJ: Have you always done art with your mom and sister?

OW: Yeah. We have this huge cabinet in our kitchen that’s just full of art stuff. And my mom’s always been into it and so we have for a while. We don’t always do it together, but we do have this wall that’s just covered in stuff that my sister and I made as little kids.

OW: Yeah, last year I took “Drawing I” and “Drawing II,” which was awesome, and now I’m in “Architecture,” which is also a studio art. Those have been some of my favorite courses.

SJ: How else have you been keeping busy? What has been your content of choice to watch?

OW: I like to listen to whole albums all the way through when I have enough time, like on walks and things like that. I also feel like everyone’s watching a lot of TikToks.

SJ: I swore that I was not going to watch TikToks. Before we left campus, I was like, ‘It’s insane and I am never going to get into it.’ And now I’m obsessed.

OW: It’s crazy. You don’t even realize how much time you’re spending on it until you look back at the clock and it’s been like 45 minutes. But, you know, I loved Vine, so it’s kind of Vine 2.0, and I’m really happy about that.

SJ: Have you made any TikToks?

OW: I’ve made a few that I like. I make them and I’m like, ‘Oh, this is funny.’ And then I go back and watch it, and I’m super embarrassed about most of them. I think I have two that I’ve made myself that I think are genuinely pretty funny, but the rest are just silly.

SJ: That’s honestly two more than I can say. That’s an accomplishment.

OW: Thank you. And then what else? Oh, we’re so late to the game on this, but we’re watching Game of Thrones. Like as a family. So we’ve finished an episode every night, basically this entire time.

SJ: What’s it like watching Game of Thrones with your whole family?

OW: It’s interesting. [Laughs.] I think in the beginning, since there are a lot of sex scenes and it’s also really gory and a lot of the content is pretty twisted at first, it was like, ‘Oh, do we really want to keep watching this?’ Some of this stuff was just like, inappropriate. And then we got invested in the storyline and started to fall in love with some of the characters. Now, we’re super into it. I’m so bad with blood and, you know, graphic stuff like that, and sometimes I leave the room. But it’s been good. We joke now about which family we would each belong to if we were characters based on our personalities.

SJ: So you don’t all belong in the same Game of Thrones family?

OW: No, my sister and I are really different personality-wise, and I think the same is true for my mom and dad. So we’ve decided that I’m in the same family as my mom, and my dad is with my sister.

SJ: What family are you and your mom in?

OW: OK, so I think this is debatable because I’ve told some of my friends about this and they’re like, ‘No, you’re wrong.’ But I think I’d be a Stark. That’s what I want to be. And I was happy when my family decided that I was a Stark. But we always joke that my dad’s part of the antagonists’ family. [Laughs.]

OW: I like contrast. [Laughs.] Trying to keep things interesting.