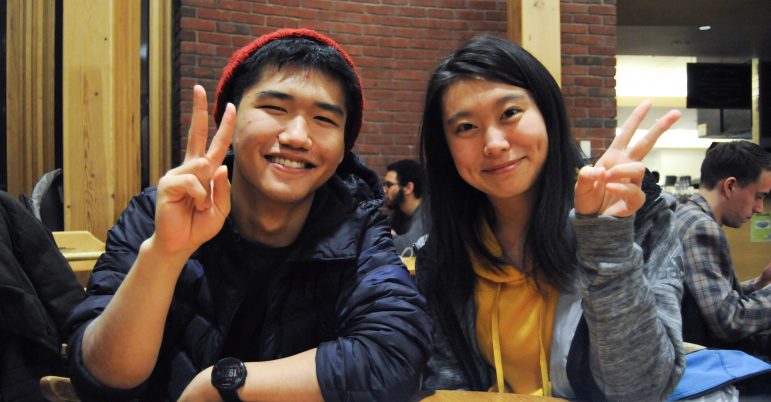 In honor of Valentine’s Day, the Record brings you its annual profile of a campus couple. This year, that couple is Phoebe Huang ’20 and Will Huang ’21, who have been dating since the sixth problem set in their econometrics class last spring. I caught up with them to discuss making lavender-stuffed cows, spending summer on campus and being asked if they are related.

How did you two meet?

WH: We met in Professor David Zimmerman’s econometrics class. Great class. I would advise you all to take it for economics and for [Laughs.]… We both happened to be at the TA session for this class. It was my birthday of last year, and I remember just sitting instantly next to Phoebe. She was kind of a nervous wreck, asking so many questions to the TA.

WH: [Laughs.] Well, she is self-admittedly not that good with numbers, so I turned to her and said, “Hey, do you need help?” She nervously laughed and, thankfully, said yes. So we exchanged phone numbers and started talking and doing homework together.

Super smooth. So, Phoebe, I guess when Will asked you for the homework, it clicked for the both of you in more ways than one.

PH: Yeah, pretty much. Although I would feel bad sometimes because I kind of felt like I was dragging the team down because I was slower with the p-set, but it got better as the semester went on.

WH: She helped a lot of the time, too.

How long have you two been dating?

PH: Which was very considerate.

WH: – until I asked her out. Actually I asked her one time when we were doing work together, “Hey, do you want to go out?”

PH: [Laughs.] I thought he meant outside at first, because I’d never been asked out in person before.

Were you both on campus over break? I heard it’s beautiful here during the summer, unlike how it is right now.

PH: I did CS [computer science] research and Will did econ research. But we actually had a bucket list of activities that we wanted to do for the summer.

WH: We watched a lot of good movies. Interstellar was one of our favorite ones. We also got to travel quite a bit; one weekend, we went to visit Middlebury, Vt., and my hometown in Princeton, N.J.

PH: We also played a lot of Pokémon Go. [Laughs.]

Will, I remember you lived in the first floor of Frosh Quad last year and had to deal with a lot of noise, especially on the weekends. Are you two big partygoers?

WH: No, but there was this one night when a lot of the people outside were being really loud, and I couldn’t sleep.

PH: And I lived in Mission during my first year, which is far superior, for the record – pun intended – and I never had this problem. But since Will lived in Frosh Quad, he often had to deal with some weird things that I don’t understand that happen on this campus way too often. Like, this one night, he couldn’t sleep because there was something like a wheelbarrow being pushed outside his window.

WH: Something with wheels.

PH: So I had this stuffed cow from one of the events from ACE [All Campus Entertainment] –

WH: By the way, she missed a portion of our econometrics group meeting for this –

PH: [Laughs.] I did have to excuse myself from our final group project for this… But I had a sleep kit from the Health Center that came with lavender, tea and honey, so I stuffed the cow with some lavender, which is supposed to help you sleep, and I gave it to Will during one of our 3 a.m. walks to help him sleep.

WH: His name is Angus. The cow family has since grown to four, though I gave one of them to my sister.

Do they all have names?

PH: We have Angus – Angie for short. We also have Wagyu, Kobe and Kalbi.

WH: [Laughs.] Basically, yeah. We have the same last name.

Have there been any funny moments about that?

WH: People have told me that they thought we were related or were siblings. One person actually came up to us and asked, “Are you two related?”

PH: And I was like, “I hope not.” That would be pretty unfortunate.

WH: Well, we are as likely to be related as two white people by the name of Jones.

PH: It was a little rough, especially with the time zone difference, because he would have activities during the day, and I would have work during the day. This meant that if one of us stayed up late to talk, we would end up tired the next day, so there was never a good time, except for the weekends.

WH: I brought back a bunch of snacks for Phoebe. There’s also this one sticker that we like to use that’s called “BugCat-Capoo.” It’s this blue cat that has six legs that’s called a “cat-erpillar.” I found that this bubble tea chain in Taiwan was doing a collaboration with BugCat-Capoo, so I thought, “Hey! Phoebe likes this a lot.” So I bought a cup. I made sure to peel off the seal so I wouldn’t break it with a straw. I chugged it down, cut it up, preserved it between the pages of a book and brought it back.

This is the sweetest bubble tea story I’ve heard in my life. Now I’m craving bubble tea! And a mans. For all the lonely hearts still out there, are there any words of wisdom you would like to share?

WH: Professor Zimmerman is the best matchmaker out there.

PH: Go to your TA sessions.