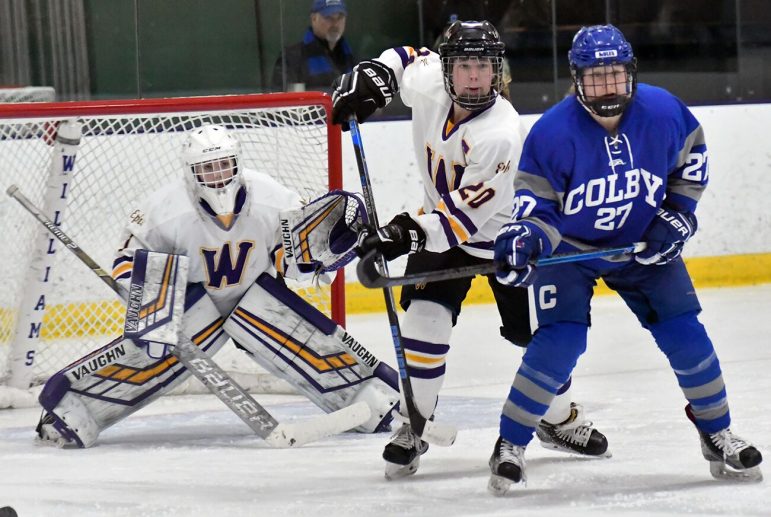 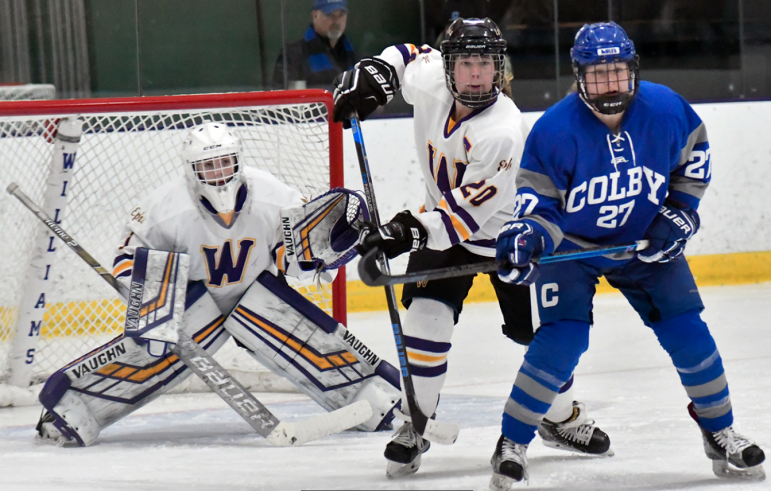 Goaltender Chloe Heiting ’22 has recorded a save percentage of .938 and notched four shutouts for the Ephs, who currently rank 10th nationally. PHOTO COURTESY OF SPORTS INFORMATION.

But the sweep was just one weekend in what has been a consistently strong season filled with landmark victories for the team. The women pulled off the highest-ranked upset in program history against No. 2 Elmira on Dec. 8, securing two goals in the last two minutes of the third period for a dramatic 4-2 win.

Then, for the first time in 14 years, the women beat Amherst on Jan. 25 in a 4-0 shutout and topped it off by sweeping the Mammoths with a 5-2 win the next day.

Head coach Meghan Gillis kept the pucks from the Amherst games as mementos. “[The wins] showed us what we were capable of,” she said. “They serve as a reminder for what’s possible.”

Indeed, the Ephs have earned their place, rising to tenth in national rankings and second in the NESCAC standings. To finish the regular season, the women are poised for two exciting matchups against No. 8 Middlebury, which places first in the conference, on Friday and Saturday.

The games will determine the regular season NESCAC title, as well as which school will host the NESCAC tournament. The winner of the conference tournament earns an automatic bid to the NCAA tournament.

“I think most of the other seniors agree with me that this is the best team we’ve been a part of, in terms of ability and potential and fostering a sense of camaraderie,” said Claire Mancheski ’19, one of the Ephs’ four co-captains.

Strong leadership has contributed to the team’s success, with a veteran group of seniors including Mancheski and co-captains Abby Brustad ’19, Annie Rush ’19 and Eliza Quigley ’19. Underclassmen have also made major contributions. Goalie Chloe Heiting ’22 was named NESCAC Player of the Week on Jan. 21, and three-time NESCAC Player of the Week Meghan Halloran ’21 leads in the conference in points, goals, assists, power play goals and power play points.

But for many team members, including Mancheski, the success does not come primarily from individual achievements but from a team bond that is stronger compared to previous years.

For Halloran, having a group of supportive teammates in all parts of her life at Williams – whether playing pick-up soccer for fun or getting meals together – has translated further into a team that is deeply committed to maximize its potential.

“Last year, we knew we could have been really good, but we never got to the point where we were consistent,” Halloran said. “I think this year, everyone’s super committed to our goals of winning a NESCAC championship and then going on and competing in the NCAA tournament, whereas last year, I don’t think everyone was on the same page with the goals.”

Mancheski said one of the biggest steps the team has taken is holding all members more accountable to ensure everyone works to the best of their ability.

“Everyone has elevated their game,” she said. “I think it was a collective effort between the coaches and players in the beginning of the year, thinking, ‘We have a really good thing going here, and we could have a lot of success, so let’s just rise to the occasion and play some good hockey and have fun.’”

As a first-year, Heiting said she was inspired by seeing a “good group of girls who want to be here” and want to improve their playing in every way possible.

And, according to Halloran, the women have taken more concrete steps to improve their skills. They reviewed penalty kill set-ups, a weakness last year, and worked on new offensive tactics and defensive-zone coverages.

The skills-based approach, compounded with stronger team chemistry, has allowed for the women to enter each game with high spirits.

“We have been a lot more confident than we have in the past, so we’ve been more successful this season,” Halloran said.

The dedication that the team has put into its play has also been a rewarding experience for Gillis.

“Each season has its own personality and style, and this season has been the most fun I’ve had in my eight years at Williams with this group,” Gillis said. “They’re willing to sacrifice the ‘me’ for the ‘we,’ and they come excited to work every day and compete on the weekends.”

As the team has seen its efforts pay off on the ice, Mancheski said the team is entering the end of the season with a heightened sense of optimism and energy.

“I think the past wins have just proved that we could be a part of an elite group,” Mancheski said.