Admissions hosts Virtual Previews for the Class of 2024 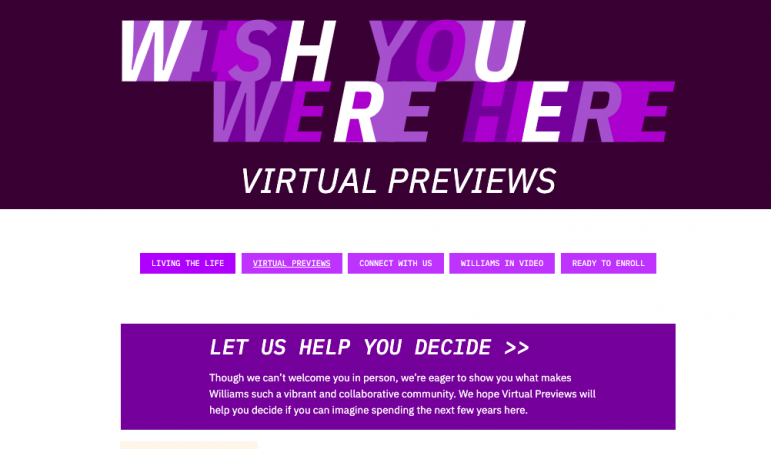 The Virtual Previews website functioned as a “hub for admitted students,” according to Dean of Admission and Financial Aid Liz Creighton ’01. (Photo courtesy of the Office of Admission.)

The Virtual Previews website functioned as a “hub for admitted students,” according to Dean of Admission and Financial Aid Liz Creighton ’01. (Photo courtesy of the Office of Admission.)

Students admitted to the Class of 2024 participated in Virtual Previews on Monday, following the cancellation of on-campus revisit programming due to COVID-19. The event, hosted by the Office of Admission, featured virtual versions of several sessions typically offered on-campus each spring.

This year’s modified schedule included Zoom panel discussions featuring members of the College community, pre-recorded videos and PowerPoint presentations, as well as related content on the office’s social media accounts. The event was launched by Admissions earlier this spring and was held on the “Welcome to Williams” website, which featured an interactive schedule linking to the day’s events.

“Our hope was to give admitted students and families a genuine sense of the Williams community from afar and to provide important information about the people, offices and resources that will support them during their time here,” said Dean of Admission and Financial Aid Liz Creighton ’01.

Previews began with an introductory pre-recorded video featuring President of the College Maud S. Mandel, Assistant Professor of Geosciences José Constantine and Shiara Pyrrhus ’23, during which Mandel officially welcomed admitted students and their families to the day’s events.

This was followed by a recorded zoom call with four members of senior staff at the College, during which Creighton, Dean of the College Marlene Sandstrom, Vice President for Institutional Diversity, Equity and Inclusion Leticia Haynes ’99 and Vice President for Campus Life Steve Klass spoke about the student experience.

In a live-streamed faculty panel, professors answered questions about academics at the College from prospective students and their families. Over the course of an hour, which included a brief appearance by Professor of Romance Languages Leyla Rouhi’s cat, panelists detailed their own research interests and the College’s liberal arts focus.

Ngoni Munemo, Professor of Political Science and Associate Dean for Institutional Diversity, Equity and Inclusion, found that the remote set-up did not hinder faculty members from sharing their reflections on the College.

“While we were all extremely disappointed that Previews couldn’t take place on campus as usual, I was pleasantly surprised at how well the virtual format worked to provide admitted students with what makes Williams such a special place,” he wrote in an email to the Record after the session.

The Virtual Previews website also featured several remote versions of break-out sessions typically offered at Previews. Some offered videos, talking admitted students and families through topics like the experience of being a first-gen student or the role of the arts on campus. Others took the form of PowerPoint presentations with voice-over recordings on many aspects of life at the College, such as financial aid and student involvement in the local community. There was also a Q&A panel with students Morgan Whaley ’20 and Ruairi OCeaurail ’20.

Abby Murphy, an incoming first-year from Arlington, Va., watched all the videos with her parents. “It was three hours of basically just listening, which was a little draining. However, it did get me very excited to start at Williams,” she said.

Also occurring virtually was an Instagram takeover on the College’s admission account hosted by Zoe Bank ’23. Bank, the social media assistant for the Admissions Office, used the Instagram account to promote the events and share more about the student experience at the College. She also hosted a trivia competition giving away Eph gear, which attracted hundreds of virtual participants. 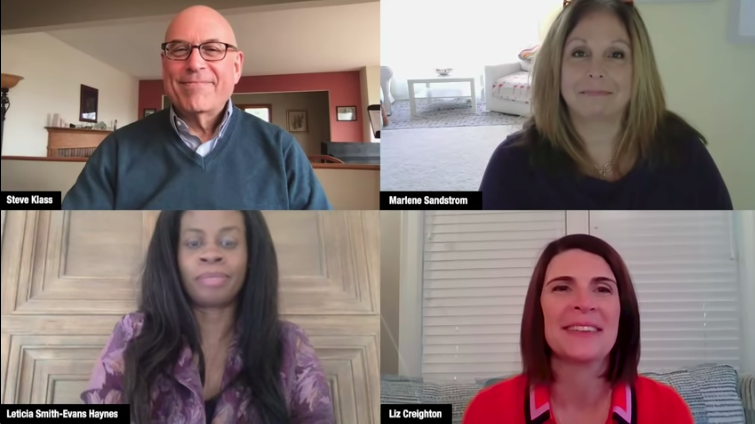 Members of the College’s senior staff conducted a session on “Making the Most of Williams” over videoconference. (Photo Courtesy of the Office of Admission.)

While the Admissions team managed to move many Preview events online, some traditions could not be adapted for the virtual format. The midnight hike up Stone Hill for s’mores, the Student Performance jamboree and other more informal events did not occur this year. “It was obviously much more difficult to give people a sense of place when being out and about on campus and in campus buildings is not possible,” Creighton said.

Jay Corey, the College’s videographer, worked on additional videos to “give that sense of place in the absence of being able to visit,” she added.

According to Creighton, when admission decisions were released for the class of 2024, about 60 percent of admitted students had never visited campus. While this is consistent with past years, the figure typically shrinks dramatically after Previews, during which many students are able to come to Williamstown for the first time. This year, however, many will have to make a decision without visiting.

Prefrosh who had visited campus noted that their experience visiting plays a large factor in the decision process. “In comparison to other campuses I have been to, it [the College] ranks high in terms of beauty,” said Lilly Goldstein, a prospective first-year from Brooklyn, N.Y. “I know I want to go to a school where it is enjoyable to be on campus, not just manageable, and Williams definitely gave that picture.”

An additional missing piece for some students was the social aspect. Previews is the first instance where a large percentage of the prospective class can meet one another and begin to picture their life at the College when sitting in on classes or eating in a dining hall together. Emily Axelrod from Bethesda, Md., who was accepted Early Decision, said, “The panels served more as a ‘why Williams,’ while I was looking forward to Previews more for the social/meeting people aspect.”

To supplement staying in the dorm of a current student, each prospective student received a “virtual host.” With matches made based on hometown and academic interests, virtual hosts were encouraged to reach out to their prefrosh before April 12 to share about their time at the College thus far and answer any personal questions ahead of Virtual Previews. Unlike on-campus hosts that are only current freshmen, students from all class years were able to be virtual hosts.

The Office of Admission recorded all of Monday’s sessions, making them available online to those who could not participate in real-time. Admitted students also received “swag packages” in the mail, filled with items students are typically given when they arrive on campus for Previews.