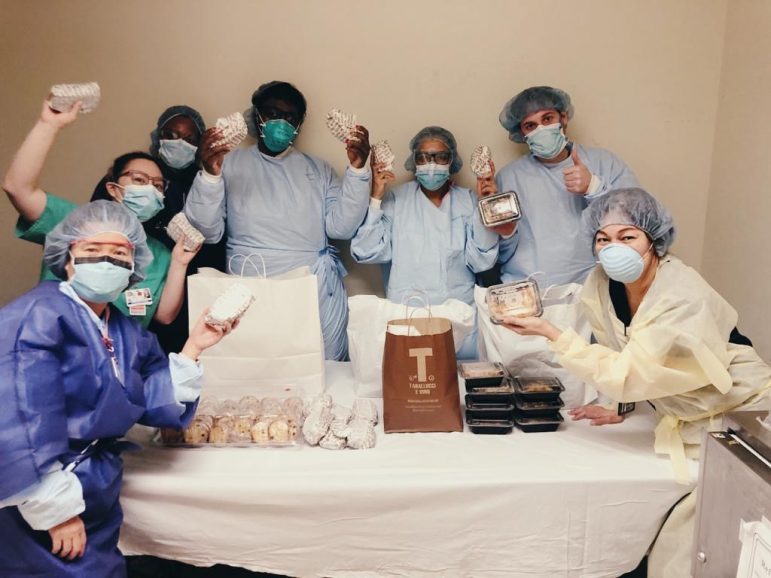 Like many of his classmates at the College, Ian Di Pietro ’23 left campus in the middle of March to find his hometown significantly altered. Just as Ian was departing for his home in Manhattan, New York Gov. Andrew Cuomo declared that schools, restaurants and bars in the city would close due to the COVID-19 pandemic. This news hit especially close to home for the Di Pietros, who make their living as the owners of a group of Italian restaurants called Taralluci e Vino.

Taralluci e Vino has five locations in Manhattan and employs 105 people in total. After Cuomo’s order to end sit-down service, the Di Pietros were forced to lay off 92 of their employees, keeping only a small staff on duty so that the Upper West Side location could stay open for takeout and delivery services. Soon after the closures, a friend of Ian’s mother called from Canada, hoping to support the business and healthcare professionals alike by purchasing 40 meals from Taralluci e Vino and asking that they be delivered to workers at overloaded New York City hospitals.

The phone call helped the Di Pietros discover that the nutritional needs of healthcare workers had been overlooked, and addressing that need had the potential to keep their own restaurants afloat during the pandemic. By founding Feed the Frontlines, an organization which allows people to purchase Taralluci e Vino meals online for delivery to hospitals in New York City, the Di Pietros found a solution that could simultaneously benefit medical workers and their family business.

The operation has grown immensely in a matter of two weeks: as of Friday, Feed the Frontlines had delivered over 10,000 meals at no cost to medical workers. The organization has served meals to 19 hospitals and one elder-care home, with plans to expand further in the future. For now, the deliveries have been focused in Manhattan and Brooklyn, since those are the easiest to reach from Taralluci e Vino’s physical locations. However, Ian pointed out that there is a substantial need for these services in the Bronx and Queens.

“[These boroughs] have been hit harder because those are where a lot of multi-generational families are, so kids will come back and give [COVID-19] to their grandparents,” Ian said. “Those hospitals are getting hit the hardest, so we’re expanding out there now.” The Di Pietro family is doing this not by expanding Taralluci e Vino’s reach, but by partnering with local restaurants to set up the same kind of ordering and delivery system in the other boroughs.

The meals are having tangible effects at the hospitals, according to Daniel Sartori, associate director of internal medicine residency program at the NYU Langone Hospital-Brooklyn.

“Feed the Frontlines has been instrumental in helping the Department of Medicine at NYU-Brooklyn during the COVID-19 outbreak,” Sartori said. “Each night, they donate and deliver a warm, delicious and individually packaged meal for the Medicine Residents. These meals allow our doctors to focus on caring for patients, provide needed nourishment and are a constant reminder of the incredible community that is New York City.”

The good news isn’t limited to those receiving the meals, though. With the influx of orders, the Di Pietros were able to rehire 30 of the 92 laid-off employees and re-open the kitchen at a second location just to fill Feed the Frontlines’ orders. Throughout this process, Ian himself has been hard at work, keeping a master spreadsheet that tracks meal purchases through the website and deliveries to the hospitals. He also corresponds over email with other restaurants that want to join the organization and stays in close communication with contacts from the hospitals to make sure Feed the Frontlines fulfills their needs.

The organization has been met with strong support from the College community, according to Ian. He said he is especially grateful to his teammates on the lacrosse team spreading the word about the organization.

“The close-knit nature of the Williams community has really shown itself in this process,” Ian said.