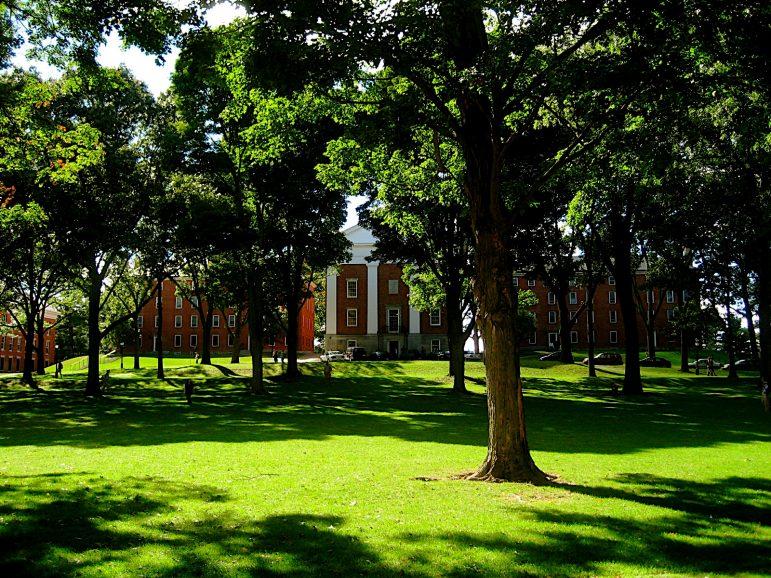 The main quad at Amherst. Students have called for their school to take action in the wake of a racist incident involving members of the men’s lacrosse team. (Photo courtesy of David Emmerman/Wikimedia Commons.)

Students and alumni of Amherst have demanded that the college take action to address racism on campus in the weeks after members of the men’s lacrosse team said the N-word multiple times outside their black teammate’s suite. In response to the incident, Amherst President Biddy Martin announced sanctions for the team, including placing it on probation for over a year and firing the head coach.

Amherst’s Black Student Union (BSU) circulated an online letter with eight demands as part of its #IntegrateAmherst movement. The letter demands that Amherst “revise, amend, and reimagine the Statement of Freedom of Expression and Dissent to improve upon its address of hate speech and speech that incites violence”; create “a Bias/Discrimination-Related Reporting and Response Protocol”; implement “anti-racism training” for faculty, staff and students; and “redress the harm caused by the three seniors of the Amherst Men’s Lacrosse Team to the wider community of students of color.”

The #IntegrateAmherst movement was catalyzed by a racist incident on March 8. Early that morning, three members of the men’s lacrosse team loudly, repeatedly said the N-word outside a black teammate’s suite, according to The Amherst Student. “Provoked, the Black lacrosse player punched one of the teammates chanting the N-word,” the Student reports.

A representative for the lacrosse team took issue with the Student’s characterization of the slur as being “chanted,” telling the Student that the three students loudly said the N-word to each other and that the black student overheard the slur. The Student stands by its reporting, however.

The #IntegrateAmherst letter demands that Amherst not punish the student who punched his teammate. While the letter calls for “consequences” for the three students who said the N-word, it does not offer a conclusion about whether expulsion is the right response. Instead, it asks for at least an apology from the three students and a formal condemnation of the students by the athletics department.

The letter has accrued over 1,500 signatures from Amherst students, faculty and alumni, as well as from allies not affiliated with Amherst, including several Williams students. A separate letter from Amherst alums decried the racist incident and urged the institution to take action.

In an all-campus email on March 20, Martin announced sanctions for the men’s lacrosse team in light of its “culture and actions.” Among other measures, Amherst has placed the team on probation through next spring, prohibited the team from holding official gatherings until Nov. 1 and fired the head coach. Martin noted that the incident this March was part of a larger trend of “deeply troubling cases involving some team members over the years.”

“Those cases include sharing photos of a teammate with a swastika drawn on his face who had passed out at a party, and GroupMe exchanges denigrating and ridiculing gender-nonconforming and trans staff,” she wrote. “What makes these matters worse is the failure of those involved to own up to their behavior and the failure of teammates to identify who was at fault.”

Martin announced in another statement on March 27 that Amherst would work to develop procedures for handling instances of identity-based discrimination and harassment.

“We know that it is not enough to bring talented students from many backgrounds together if the educational environment is not supportive of the success and flourishing of them all,” she wrote. “Recent incidents and accounts of student and alumni experiences give abundant evidence of that fact.”

In an op-ed in the Amherst Student on April 2, the BSU criticized Martin’s response. Punishing the entire lacrosse team will, the group wrote, “both scapegoat individuals [and] leave the institution’s racist structures unaltered.” The op-ed also argued that Martin has not done enough to prevent racism at the college.

Sirus Wheaton, an Amherst first-year who is involved in the #IntegrateAmherst movement but emphasized that his views do not reflect those of the whole movement, said he felt that Martin was unduly influenced by a concern for donations from alums and failed to take strong enough action against the lacrosse team.

“Instead of focusing on the well-being of current students and the people affected by these horrible things, she played into the people who pay for things,” he said.

A representative for Amherst pointed the Record to Martin’s two statements but declined to comment further.

Men’s lacrosse, in a Student op-ed, denounced the use of the N-word by some members of the team but asked that the Amherst community not condemn the team as a whole.

The Amherst BSU posted a statement on its official Instagram thanking the team for “taking the first step” with its statement.

“We won’t tolerate the College scapegoating you for their institutional problems,” the post reads. “You are a part of the Amherst community, and even if the College abandons you, we won’t.”

Monday, April 13, 9 p.m.: This article has been updated to include additional statements by the Amherst men’s lacrosse team and the Amherst BSU, as well as to include more details about the nature of the racist incident.

Wednesday, April 8, 2:50 p.m.: This article has been updated to include additional student perspectives.