Connors Brothers Moving: The Story Behind the Storage 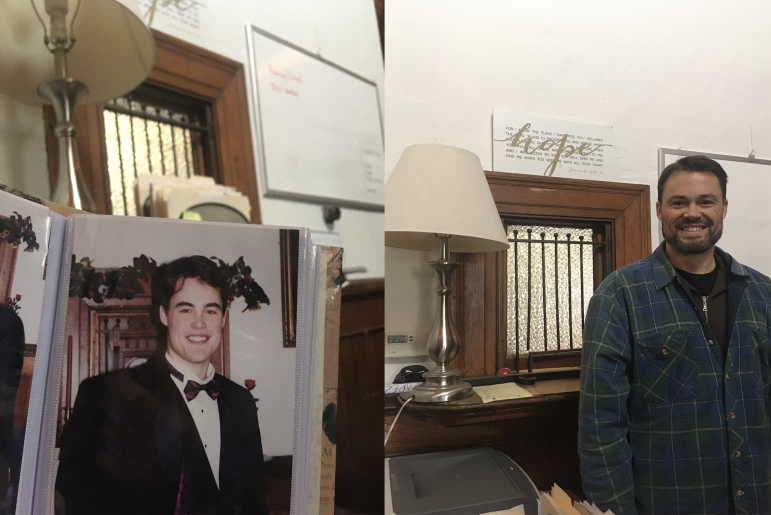 Jarrett Bayliss, the owner of Connors Brothers, stands in the same place in his office as a young adult (left) and in February of this year (right).(Photos courtesy of Jarrett Bayliss.)

Jarrett Bayliss knows what you’re hiding, but he’s not going to tattle on you.

“I have become the least judgmental person you’ll probably ever meet,” Bayliss said from behind his desk. “I’m sure there’s something I’ll see for the first time, but I’ve seen almost everything.”

With student departures from campus coming far earlier than expected this year, Williams students rushed to move their belongings into storage until the fall. Many used the ubiquitous purple pods marked “Connors Brothers Moving and Storage” that crop up on campus during move-in and move-out. And Jarrett Bayliss, the owner of Connors Brothers Storage, once again made acquaintance with all the student belongings stashed in those pods for safekeeping.

While most students have seen those purple storage pods, few probably know the history of the company that unpacks and stores their items, a history bound up with both the College and the town.

Connors Brothers was founded in the 1940s by Williamstown resident John Connors and is now located at 370 Cole Avenue, right across the Hoosic River from the Spirit Shop students frequent. If you walk down to 370 Cole Avenue today, you might notice the skeleton architecture of a train station that remains on the property. Before the building became an office, it was the western terminus for freight and passenger trains operated by the Boston and Maine Railroad Company, and the place where many young Williams men first stepped foot into Williamstown. However, by 1958, due to the rise of personal automobile travel, Boston and Maine ceased passenger train service to Williamstown; freight service closed down the following year. In 1962, John Connors seized the opportunity to move his business to the vacant Romanesque train station, where it remains headquartered today.

Though most businesses operating in Williamstown are somewhat bound up with the life of the College, Connors Brothers became more directly intertwined with the College when it came under the ownership of an Eph alum in the early 1970s. Oswald “Oz” Tower ’41, who was on the lacrosse, football and wrestling teams, decided to move back to Williamstown in 1974 with his wife, Eleanor Daniels. That April, he bought Connors Brothers Moving and Storage from John Connors, and five years later, Tower handed off the business to his daughter, Ellen Bayliss, who ran it for nearly 30 years.

Jarrett and his two brothers, Trevor ’99 and Jonah, assisted their mother with running the business when they came home from boarding school in the summers. “I look at the kids I went to [Andover] with and I felt I was different, ’cause I grew up in a working class home,” Jarrett said. “When I’d come home for summers I’d either work for her or get woken up in the morning because an employee didn’t show up, whereas I felt like some of my peers were like, ringing the bell for the butler.” Out of the three Bayliss brothers, Trevor, the eldest, was the only Bayliss brother to attend the College. A Junior Advisor and member of the track team, Trevor graduated in 1999 after beating a rare form of lymphoma diagnosed during the summer after his freshman year. He is now an oncologist at Berkshire Medical Center.

Jonah Bayliss, the youngest of the Bayliss brothers, went from playing games of catch during Williamstown summers to pitching in the Major Leagues. In 2005, Jonah made his MLB debut pitching for the Kansas City Royals. With Trevor looking towards medical school after graduation and Jonah on the pitcher’s mound, Jarrett was the brother best positioned to take over the family business, which he did in 2005.

Jarrett’s biggest innovation to Connors Brothers Moving was introducing the moveable storage pod, which has become a popular way to store items on campus. Connors Brothers gives students only three days to pack these pods up to the brim. The reason behind this policy? The College does not want to deprive the grass below the pods of sunlight for more than a few days. Jarrett explained that crafty students quickly found a way around this policy to buy them (literally) extra time with end-of-year packing. “We offer a service where you can move your pod across campus, and we very quickly had students saying ‘Well how about I move my pod five feet over, and still pay the $100 fee?’” said Bayliss. “And we said, ‘Well, we can’t stop you.”

Working as a mover, Jarrett explains, means “getting up in people’s businesses.” Under mattresses in Williamstown, he reveals, you can find dildos so big “they should be considered weapons.” Jarrett has seen an entire storage pod filled with ants. He’s packed up a student’s “horse whip and closet full of outfits to match.” He’s transported a nine-foot-tall Black Jesus on the cross from Vermont to Arkansas, and found mewling kittens hiding in box springs. However, the coronavirus outbreak means that Jarrett and his team of movers cannot get as involved in people’s business as they used to. Moving and storage are deemed “essential” services, which means Connors Brothers is still open for business. However, to help prevent transmission of the virus in Berkshire County, where Connors Brothers conducts 80% of its jobs and where cases have surpassed 150 in number, Connors Brothers will no longer be performing “in-home” estimates for the cost of moving or storage jobs, and moving crews will be limited to interacting with two customers per day.

I got to visit the Connors Brothers headquarters before the pandemic, however, on a slushy day in mid-February. Under the vast vaulted ceilings and soft light from the bay window, which looked out onto the railroad tracks, Jarrett’s desk sits beside the former ticket window. The vestiges of the building’s former life as a railroad station are apparent; in the original “WOMEN’S” and “MEN’s” signs on the bathrooms or the list of destinations (Chesapeake, Canadian Pacific, Kansas City Southern) plastered on the shelf in the conductor’s office, a visitor to Connors Brothers headquarters can hear the ghost whistle of a freight train. But in the photo albums of the smiling brothers lying around 370 Cole Avenue, one can also discover a legacy at Connors Brothers that spans Oz Tower’s experience at the College in the 1940s to the boxes we hurriedly packed for storage. Though many of us may not return to Williamstown in the near future, it may be comforting to know that some have spun a Williamstown tradition into a life.