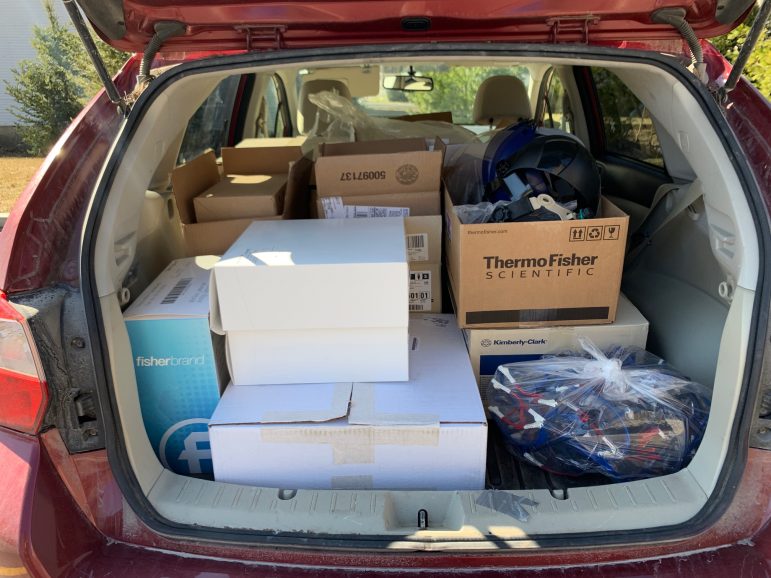 Boxes of personal protective equipment sit in the trunk of Professor Cohen’s car. The equipment was donated to two small hospitals close to the College. (Photo courtesy of Phoebe Cohen.)

Hospitals across the United States, overwhelmed by COVID-19, are facing critical shortages of personal protective equipment.

After hearing about this shortage, Associate Professor of Geosciences Phoebe Cohen contacted staff at Southern Vermont Medical Center (SVMC) and Berkshire Medical Center (BMC), two of the closest hospitals to the College, to ask if they were in need of supplies. They were, she discovered, and on March 16, she began organizing a personal protective equipment drive throughout the College’s science departments.

Cohen contacted Dawn Schoorlemmer at the College’s Science Center, who in turn sent an email to all science faculty asking for donations of any personal protective equipment, including gloves, face shields, goggles and masks. “Those are all supplies that we keep on hand for use in our teaching and research labs, which are all shut down for now,” said Professor of Chemistry Lee Park. Many professors had items remaining from unfinished labs, and were happy to donate items which otherwise would not have been used until next fall.

“I have lots of friends across the country who have been participating in drives and donating things to their local hospitals,” Cohen said. On March 21 she loaded all of the donated materials into her car by herself, in order to comply with social distancing guidelines, and drove to deliver them to the hospital staff.

“I would estimate that we donated a few thousand pairs of gloves, probably around 30 to 40 face shields, … probably around 100 pairs of goggles or protective glasses, … maybe a dozen of those [N95] masks,” said Cohen, who also explained that because few professors at the College do research involving harmful airborne particles, the much-needed N95 protective masks were in short supply.

Staff members in charge of labs and science department materials were also involved in selecting which items would be donated and which would be kept. “For example, we have an animal facility at Williams, so we had to keep some for the people who watch over the animals,” Cohen said.

“A lot of the stuff that I gave away I bought with money from federal grants,” said Cohen. She explained that there has been some discussion about the ethics of donating supplies bought with grant money, but the consensus was largely that the donation is justified by the threat of the pandemic. Cohen said she hopes that professors will be able to replenish their supplies at the beginning of next semester. “When we return in the fall, hopefully things will have changed in terms of supply chains ramping up,” she said. “Six months from now, hopefully there won’t be such a shortage.”

“These are things we order periodically throughout the year,” Park said. “None of what we donated was originally intended for medical use, so in many cases, I’m sure it’s not exactly what’s most needed, but the hospitals are desperate.”

Cohen gave the contact information of Assistant Director for Custodial Services Dan Levering to a staff member at SVMC, who reached out to Levering to ask if custodial services had a surplus of hand sanitizer that they could share. “We do not and it has been difficult to get products delivered,” Levering explained.

BMC is the closest hospital to the College and would likely be where students would be sent if they contracted the virus and needed medical attention. “One of the reasons that Maud [Mandel] said we’re sending all the students home is that BMC is a small rural hospital,” Cohen said. “If the virus swept through the dorms and a lot of faculty and students and staff got sick, we would overwhelm the local health resources.”